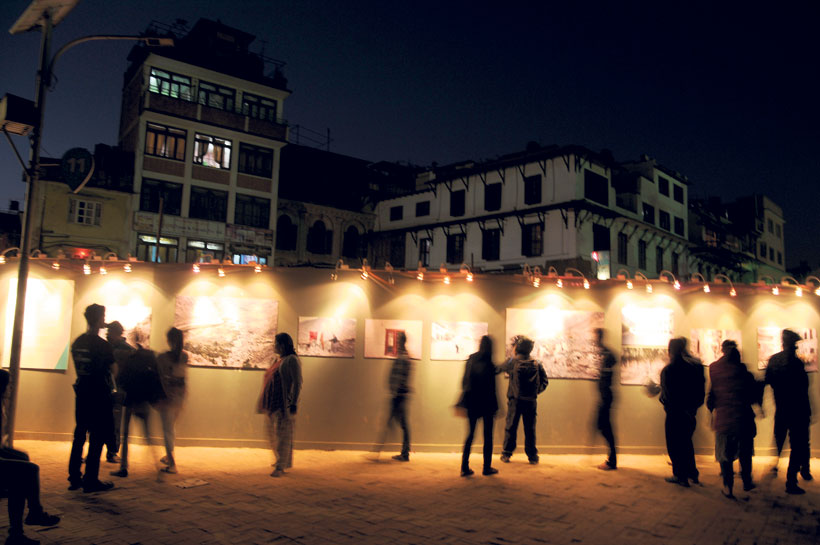 November 3, 2016 marked the end of the second edition of Nepal’s only international photography festival, Photo Kathmandu. The festival had claimed that their goal was to create connections between the city, its people, its history, and its dreams and aspirations. It wanted to serve as an alternative platform for conversations between visual storytellers and local audiences. So at the end of their two-week event, The Week talked to a couple of visitors to find out if Photo Kathmandu had indeed managed to connect people to art and provide creative inspirations as they had initial set out to.

“I am enjoying this so far but I wasn’t expecting to do so.”

I was visiting my in-laws in Patan when I decided to go have a look at the photos set up around the Durbar square. I hadn’t heard anything about this event but the installations at the main chowk looked interesting so I decided to take a look. I heard there were more things to see inside the other gallis as well. It’s an interesting concept. This was actually my first open air exhibition.

To be honest, I have never had enough time to visit galleries or indulge in art and photography. I’m a businessman and the business occupies most of my time. I’m enjoying this so far but I wasn’t expecting to do so. I assumed you have to really be into art to enjoy such exhibitions but I guess that is not the case. In this regard, I believe this is a great idea. I’m sure people who already go to galleries wouldn’t miss this event but because the exhibition had been installed around our community, and those like me who were out for a stroll also got a chance to visit. It’s nice to see the new generation coming up with such ingenious concepts and projects.

Right now, I’m actually looking forward to informing my teenage son about this event. He is really interested in art. This might prove to be inspiring for him as well. Even though the event has ended, it’s never too late to start appreciating art especially when it comes to you.

“I liked the artistic aspects of some of the exhibits of Photo Kathmandu. I sort of wish I had pursued my own interest in art.”

I’m actually from Palpa. I came here for a program and since it is now over, a couple of my local friends took me to see Photo Kathmandu. We don’t have any kind of art galleries in Palpa. Every now and then, there are some exhibitions here and there but nothing of this scale or standard. Those exhibits don’t get many visitors either. I think it is pretty evident that as a society we still don’t to prioritize art. The tradition of art appreciation is yet to be cultivated.

I remember participating in drawing classes and contests as a child. I really enjoyed them. I had even participated in school exhibitions but as I grew up, I gave up on them.  Looking through the photos in Photo Kathmandu brought back those memories. I liked the artistic aspects of some of the exhibits of Photo Kathmandu. I sort of wish I had pursued my own interest in art.

Further, this event proved to be very informative as well. It helped us learn about our own society in many ways. I particularly liked the installations of successful Nepali women. We had heard of their achievements but it was really nice to see their faces as well.

“Witnessing history, culture and ideas in person, on print can be very powerful.”

I was born and bought up in the Patan area and events like Photo Kathmandu aren’t new things for me. Patan in general has been hosting many exhibits, street dramas, cultural programs for years. Just three months ago, there was an exhibit on environment protection and in a couple of weeks the community will also host the Kartik Nach. So as locals of the area, we are constantly in the center of such programs. The frequency of these programs have also multiplied to such an extent that some locals have given up keeping tabs. They aren’t as interested anymore.

However, of course, we can all see that events like Photo Kathmandu are very beneficial for the community. It helps develop one’s senses. Witnessing history, culture and ideas in person, on print can be very powerful. It’s also a fun way for youngsters to gain knowledge, though the best part has to be that it’s free and open for everybody.

I know many people around here who hadn’t intentionally made plans to visit the exhibits but just enjoyed them while passing through the gallis for work or chores. This sort of exposure to art helps brighten one’s day.

“It was our parents who encouraged to visit the exhibition. They told us that we should encourage people who do good in our society.”

Photo Kathmandu had garnered a lot of buzz on social media. Our friend circle had been talking about it. There were many who had visited the exhibitions and were recommending it to others as well. Though, personally, it was our parents who encouraged us to visit the exhibition. They told us that we should encourage people who do good in our society, so we went to see what all the fuss was about.

We liked what we saw. It was nice to see all that creativity. Events like these really help promote art and artists in our society. It’s nice to see that those of us who are interested can have opportunities like this as well. In that sense, it was quite inspiring. Even though we didn’t understand everything, we could see that there were different styles and that made the visit even more interesting. Unfortunately, we just got information about the workshops and talk seminars at the end of it all so we missed it. Hopefully, the organizers have plans to hold this event next year as well. We’d like to have the opportunity to explore more. It would also be helpful if schools and colleges promoted events like these. This would certainly help many develop a taste for art and other creative works.

PHOTOS: Kathmandu after 60 days of lockdown

KATHMANDU, May 23:  The country has already witnessed two months of nationwide lockdown enforced on March 24 earlier this year... Read More...

CHITWAN, April 28: The upgradation work of Narayanghat-Mugling road section is unlikely to meet even the fourth deadline, according to the... Read More...