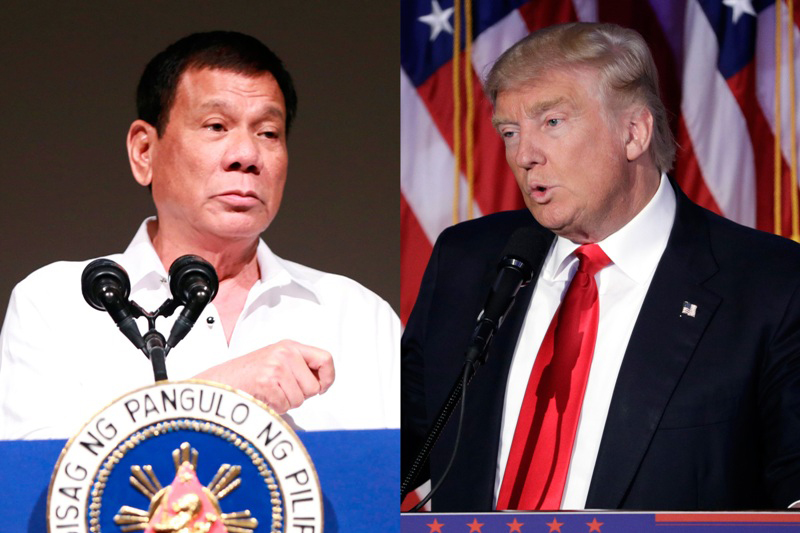 Presidential spokesman Ernie Abella said Trump mentioned he was looking forward to visiting the Philippines in November to attend an East Asia summit that Duterte will host with several world leaders and that Trump invited Duterte to visit the White House.

"The discussion that transpired between the presidents was warm, with President Trump expressing his understanding and appreciation of the challenges facing the Philippine president, especially on the matter of dangerous drugs," Abella said in a statement.

There was no immediate reaction from White House officials on Abella's description of the late-Saturday telephone conversation between the leaders.

Abella's remarks reflect the friendlier attitude Duterte has taken with Trump versus the antagonistic stance he had toward President Barack Obama, who he once asked to "go to hell" for criticizing the Philippine leader's bloody anti-drug crackdown. During Obama's final months in office, the Philippine president moved to build closer economic ties with China and Russia while repeatedly threatening to end his nation's longstanding military alliance with the U.S.

Duterte's apparent dislike for Obama began when the U.S. State Department expressed concern over his drug war — which has left thousands of suspects dead — and asked Philippine government officials to take steps to stop extrajudicial killings.

At one point Duterte suggested he may even move to abrogate a 2014 defense agreement that allows U.S. military access to five Philippine military camps.

He has walked back most of those threats but has proceeded with his efforts to align closer with China.

Asked if the rare Chinese naval visits were a sign that Duterte was backing away from Washington, Department of National Defense spokesman Arsenio Andolong said: "We are not veering away from the U.S. but rather we are expanding our relations with our fellow nations in the global community."

Abella said without elaborating that concern over North Korea also came up in Trump's talk with Duterte.

Duterte suggested in a news conference Saturday that the Trump administration should back away from an intensifying standoff with North Korea, not in surrender, but to avoid risking a nuclear holocaust that could smother Asia.

"It would be good for America to just restrain a little bit and if I were President Trump, I'll just back out, not really in surrender and retreat, but just to let the guy realize that, 'Ah, please do not do it.'" Duterte said.

Washington, he said, should not play into provocations of North Korean leader Kim Jong Un.

"It behooves upon America, who wields the biggest stick, just to really be prudent and patient. We know that we are playing with somebody who relishes letting go of his missiles and everything," Duterte said.

Badala Barilai wins millions of hearts; Saput says he wants to be a superhit
3 hours ago

Badala Barilai wins millions of hearts; Saput says he wants to be a superhit
3 hours ago