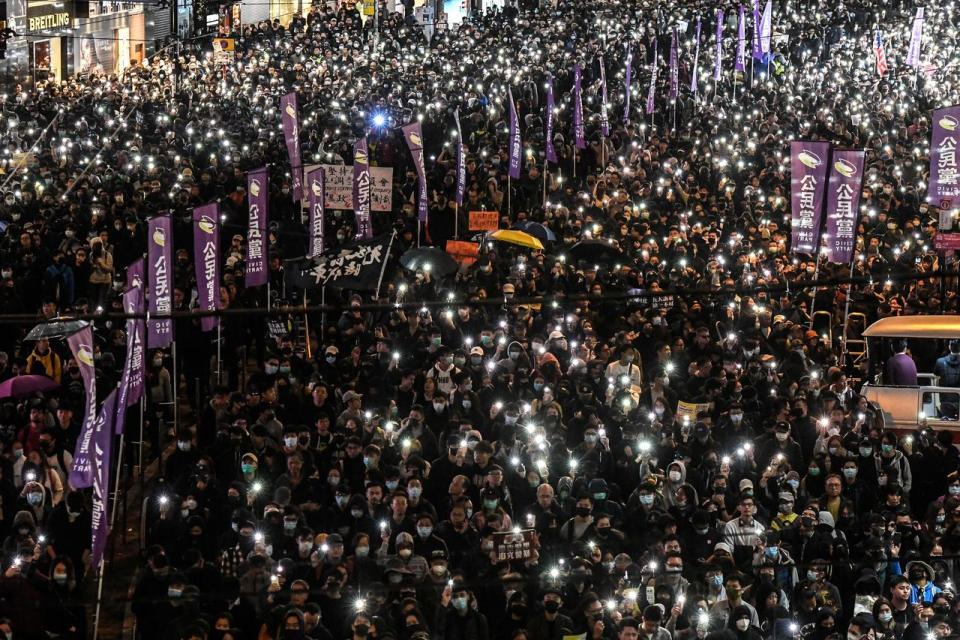 The comments came as protesters called for strikes across the city on Monday. Most railway and transport links ran smoothly during the morning rush hour and there were no reports of widespread disruptions.

Vast crowds of black-clad demonstrators had thronged the streets of the Asian financial hub on Sunday, in the largest anti-government rally since local elections last month and a resounding show of continued support for the pro-democracy movement.

While the march appeared to be largely peaceful - in marked contrast to some other mass demonstrations over the last six months, where protesters fought pitched battles with police - authorities said there was some damage after it ended.

“Although the event was generally peaceful, acts of breaching public peace happened afterwards,” police said in a statement on Monday.

“Some rioters spray-painted the exterior walls of the High Court, threw petrol bombs and set fire outside the High Court and the Court of Final Appeal, damaging government properties and seriously challenging the spirit of the rule of law,” police said, adding that shops and banks were vandalised in the Causeway Bay and Wan Chai areas of Hong Kong island.

Reuters reporters at the march on Sunday saw graffiti and protesters setting up barricades, but were not in the vicinity of the other incidents.

The Hong Kong Bar Association condemned what it called “acts of arson and vandalism” and said those responsible must be brought to justice.

Police said they arrested 42 people over the weekend for rioting, possessing weapons and other charges. Some 6,022 people have now been arrested in relation to the unrest since early June, police said.

In an editorial, the official China Daily newspaper called on the Hong Kong government to uphold the rule of law.

“Many residents in Hong Kong are fed up with the violence and disruption that have plagued the city for months,” said the newspaper, often used by Beijing to put out its message.

Hong Kong’s new police commissioner had said he would take a “hard and soft approach” to the demonstrations, where acts of violence would be treated harshly but other issues more flexibly.

The chairman and president of the American Chamber of Commerce (AmCham) in Hong Kong were denied entry over the weekend to the neighbouring Chinese territory of Macau, without explanation.

AmCham Chairman Robert Grieves and President Tara Joseph had been travelling to Macau for an annual ball. The pair were told to sign a statement saying they “voluntarily agreed not to pursue entry to Macau”.

Wong declined to comment specifically on their cases and said it was speculation that their refusal was linked to Beijing’s response to U.S. legislation backing pro-democracy protesters in Hong Kong, RTHK said.

The unrest in the city of about 7.4 million people started in June as demonstrations against a now-withdrawn bill allowing extradition to mainland China. It has since morphed into calls for greater democratic freedoms and sometimes violent protests.

Protesters have set out five demands, including universal suffrage and an investigation into alleged police brutality.

China has repeatedly blamed foreign powers, including the United States, for stirring up the unrest.