Peace and Unity Call from ‘The Bomb Factory’ 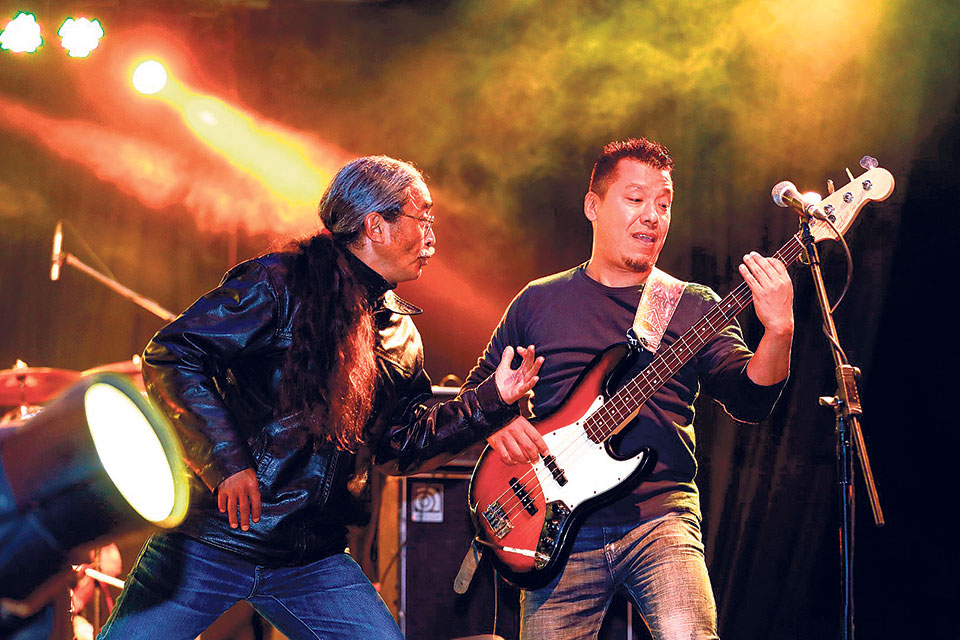 DALLAS, June 10: A site acquired by Henry Ford in 1914 for his automobile assembly plant and converted into a Bomb producing factory with the turn of World War II was the venue for Nepathya’s maiden show in Dallas of Texas, USA. The venue was refurbished as a music venue in 1993 and has hosted legendary musical figures like Black Sabbath, Korn, Robert Plant of Led Zeppelin and Don Henley of The Eagles. NEPATHYA became the first Nepali Band to headline the venue.

The Dallas show was the first on this leg of the US tour with more than 2500 people witnessing the event.

The show started with Nepathya’s opening signature ‘Kuroop Anuhar’ and went on to enthrall the audience with their evergreen classics and several new releases as well. New releases from their upcoming unnamed 10th album which includes ‘Sirfula’ and ‘Koshiko paani’ were well received by the audience. Classic hits like Bhedako Oon, Resham, Taalko paani, Joga le Huncha Bheta took the audience on a frenzy while Hami Nepali, Gaun Gaun Bata Utha and Jangi Nishan added the feel of patriotism in the air.

“It is always humbling to be standing on a stage where Robert Plant and Don Henley has stood and performed", said Nepathya front man Amrit Gurung after the show. “We grew listening to them and remain inspired by them”, he added.

As the show progressed, Amrit shared his travel journey and enticed the audience to visit the villages of Nepal. He took the opportunity to share the hard-earned stability of the nation and warned the leaders not to spare the opportunity to develop the country.

He also utilized the opportunity to say, “Bombs made in this hall may have been the medium of the destruction of humanity in the past. I hope all existing Bomb factories in the world gets converted into music venues and that love and music win over war and hatred.”

The Dallas show has been a long due one for the band. “We had approached for hosting the band in Dallas when we heard of their tour in 2012. It did not materialize than”, said Bachan Tiwari of the organizing team. Another member of the organizing team Diwash Thapa recalled, “We contacted the New York organizer to bring Nepathya to Dallas in 2015, it did not materialize than either. We then went to meet the band’s management in San Francisco, when they were performing there in 2016 and finally we have them here. This has been a dream come true for us and we the organizing team are happy to have done this", he added.

With the successful show in Dallas, the band has moved on to Boston for their performance in the east coast city on 24th of June at the Royale Boston hall.

All party unity must for elections: Peace Minister

KATHMANDU, Sept 18: Minister for Peace and Reconstruction Sitadevi Yadav has stressed on all party unity to hold all three... Read More...