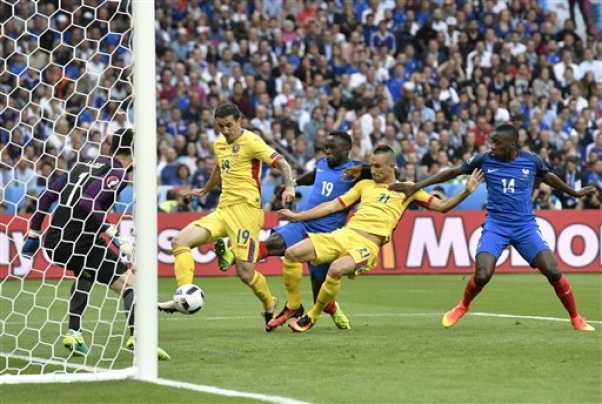 Romania's Bogdan Stancu, 2nd left, attempts a shot at goal during the Euro 2016 Group A soccer match between France and Romania, at the Stade de France, in Saint-Denis, north of Paris, Friday, June 10, 2016. AP

SAINT-DENIS, France, June 11: After scoring one goal and setting up another in France's opening win at the European Championship, Dimitri Payet left the field in tears.

The West Ham forward, now hitting his career peak at 29, was playing for his country at a major tournament for the first time. He thrived, playing a part in both goals as France beat Romania 2-1 Friday at the Stade de France.

"There was a lot of stress, a lot of pressure," said Payet, who came off in injury time to a standing ovation. "If someone had told me it would have gone like, that I wouldn't have believed it."

Payet wasn't even in the squad on Nov. 13 when the Stade de France was hit by extremists during a friendly match against Germany — part of devastating attacks across Paris that are at the heart of national emotions for Euro 2016.

But his stunning season in England with West Ham persuaded coach Didier Deschamps to bring Payet back into the team, and France was rewarded with a display of artistry.

Against Romania, Payet capped an outstanding display by curling in an 89th-minute shot with his left foot from outside the penalty area to restore France's earlier lead.

"He's capable of doing extraordinary things," Deschamps said. "It was a superb goal."

Riding its luck from wasteful Romanian finishing, France went ahead in the 58th when Olivier Giroud headed in Payet's cross from the right.

The lead lasted only seven minutes. Romania forward Bogdan Stancu slotted in from the penalty spot after a foul by Patrice Evra.

Roaming free on both wings, Payet created Giroud's first headed chance in the 10th, then fired a low cross that Antoine Griezmann met with a shot deflected wide.

When Pogba was freed to move forward in the 57th, he was picked out near the penalty spot by Payet for a volleyed shot that Romania goalkeeper Ciprian Tatarusanu blocked with his legs.

Within a minute, Tatarusanu was outmuscled in the air by Giroud, whose header looped into an unguarded goal. It was the forward's 18th goal for France in his 50th appearance.

In Pogba's deeper role, his perfectly angled pass set right back Bacary Sagna free to cross and cause confusion that led to Griezmann's header against the post in the 14th minute.

Payet was in a classic playmaker No. 10 role when Pogba was substituted with 15 minutes left.

"I'm not going to be too hard on him, but clearly his potential is such that he can contribute more than he showed tonight," Deschamps said.

Before Stancu scored his penalty, he lacked composure when spurning clear chances in each half as Romania pressed the favored French hard.

France goalkeeper Hugo Lloris crouched on his goal-line in the fourth minute to block Stancu's close-range shot at the far post after a corner.

"Had we scored that would have changed the whole match," Romania coach Anghel Iordanescu said. "At the start of the second period we got in to the box a great deal and unfortunately Stancu missed that chance once again."

For his second miss, Stancu volleyed weak and wide when left alone in space from eight meters out.

Romania arrived at Euro 2016 with the meanest defense in the entire qualifying competition, conceding just two goals in 10 matches. It took Payet's class to double that tally.