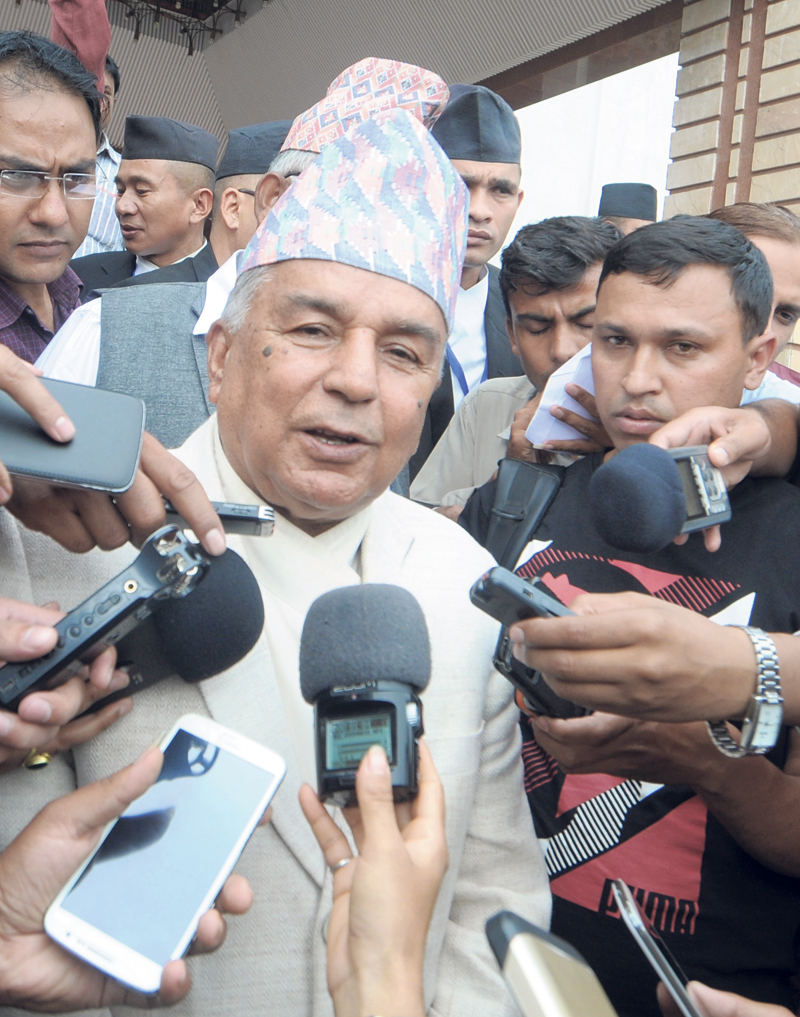 His proposal comes at a time when CPN-UML leaders including Prime Minister KP Sharma Oli and leaders from NC and the CPN (Maoist Center) have been disputing over which agenda item to be floated first for discussion at the next meeting of Parliament.

NC and the Maoist Center, which have jointly registered a no-confidence motion against the government, have been demanding that Parliament should first discuss the motion while the prime minister has been insisting that the House should first endorse the three remaining bills related to the annual budget.

Contrary to his party's position, Paudel has proposed to settle these issues in a package.“"We can first endorse the remaining budget bills, then withdraw the no-confidence motion [from Parliament] and next the prime minister shall resign from his post," Paudel told reporters while emerging from the meeting held at the parliament building at New Baneshwar, Thursday. "After that, the process for electing a new prime minister will commence and whichever political parties agree to work together can form the government," he said.

He said such an approach would also later help the political parties join hands in implementing the new Constitution.

Leaders from both sides then agreed to first hold internal discussions on the matter in their respective parties and then sit for negotiations on Friday.

Prime Minister KP Sharma Oli and Deputy Parliamentary Party Leader Subas Nembang from CPN-UML, President Sher Bahadur Deuba and Paudel from the NC and Puspha Kamal Dahal from CPN (Maoist Center), among other leaders from these parties, were present during the talks which were convened by Speaker Onsari Gharti at the parliament building.

With the meeting ending inconclusively, the speaker deferred the meeting of Parliament, which had been scheduled for Thursday morning.

Earlier, the speaker had formally notified lawmakers that the next meeting would discuss the no-confidence motion registered against the prime minister.

But she failed to convene the House meeting as the UML vehemently opposed her decision to remove the previously-scheduled agenda item of endorsing the three budget bills.

Though some leaders from both sides believe that Paudel's proposal may yeild a middle-way solution, others disagree.

Some NC leaders said that Paudel's proposal was his personal idea and it didn't represent the party's official view. NC leader Krishna Sitaula said it was Paudel's personal proposal and not the NC's official one.

Interlocutors from CPN-UML and CPN (Maoist Center) said they are pondering whether the proposal can help find a solution or not.

"We are discussing various options and Paudel's idea is one of those under discussion. The latest talks are heading in a positive direction," said UML Deputy Parliamentary Party Leader Nembang.

Leaders from the three parties, during a meeting in the morning, discussed the idea of including both agenda items in Parliament's business advisory for the day and proceeding with both issues at a single meeting of the House. But they couldn't take any decision in this connection as they still disputed which agenda item should be tabled for discussion first.

Though the House meeting was scheduled to start at 11 a.m., Thursday, it was later deferred till 2 p.m. Friday.

According to NC Chief Whip Chinkaji Shrestha, Prime Minister Oli sought a few more days before he resigns. According to him, the prime minister has argued that the constitution should be amended to clear any ambiguity in the provisions relating to forming a new government.

"His statement has made us more suspicious about the next step that he might have planned. That is why we  said the prime minister has been raising unnecessary arguments," said Shrestha.

The NC Parliamentary Party meeting held earlier in the morning had also concluded that the issue can be resolved by including both agenda items [no-confidence motion and budget bills] in Parliament's business advisory, and tackled at a single sitting of the House.