KATHMANDU, Dec  19: The former U-19 national cricket team all-rounder Yogendra Singh Karki kept his nerves to complete a tense chase of 109 runs by a wicket adding eight runs in the final five deliveries of the match with last batsman Lalit Rajbanshi to propel Lalitpur Patriots to its first Everest Premier League final against Kathmandu Kings XI.

In the first qualifier match played at TU Cricket Ground in Kirtipur on Tuesday, player-of-the-match Karki made a total of unbeaten 28 runs from 29 deliveries which included a sole boundary.

He also shared an important partnership of 37 runs with the highest scorer of the innings Kushal Bhurtel who made 29 runs from 27 deliveries including two fours and a six to secure the win.

Skipper Gyanendra Malla and Pawan Sarraf were the other double-digit scorer of the innings with 21 and 19 runs, respectively. Sunny Patel and Sandeep Jhora were dismissed for ducks whereas Sonu Tamang, Surya Tamang and Gaurav Tomar could only make a run each. Jaikishan Kolsawala made seven runs in the match.

The Indian leg-spinner Pradeep Sahu was brilliant on the day, picking up three wickets and conceding 11 runs in the four overs he delivered. The Kings XI skipper Rohan Mustafa and Irish all-rounder Kevin O’Brien shared two wickets each to put Patriots in early pressure chasing the paltry total of 109 runs. Left-arm spinner Samsaad Sheikh was the other wicket-taker in the innings whereas Surya was caught short off his ground.

Earlier, Malla won the toss and elected to field first with the sole change of left-arm spinner Surya replacing Rashid Khan in the playing eleven. Sunny, Sarraf and Rajbanshi kept the pressure with the variety of spin providing regular breakthroughs during the Kings XI innings picking up two, three and a wicket respectively. Similarly, Karki was effective with his scrambled seam-ups as well picking up three wickets.

Only three Kings XI batsmen could reach the double-figures with skipper Mustafa top-scoring with 32 runs from 20 deliveries. He smashed three fours and two sixes in his brief innings before the flood-gates opened after his dismissal influenced by Bhurtel run-out.

O’Brien soon followed scoring only one run. Sagar Pun played a patient innings of 29 runs from 30 deliveries which included a four and a six. Similarly, Siddhant Lohani made 16 runs from 24 deliveries before losing his stumps to Sunny Patel delivery.

Patriots captain Malla said he trusted Yogendra as a useful cricketer and was satisfied to watch him perform in a crucial match. “We always believed he had the potential to be a useful all-rounder. He was doing well with the ball throughout the tournament and today, he contributed with the bat which proves our faith on him to deliver was right.”

Patel of Patriots fined 75% of match fees
The Lalitpur Patriots’ Indian all-rounder Sunny Patel was charged with the ICC code of conduct for showing dissent against an umpire decision in the match against Kathmandu Kings XI on Tuesday.

Going against the spirit of the game, Patel was found misbehaving after he was given out off a Pradeep Sahu delivery caught by wicket-keeper Raju Rijal. Patriots were 54 runs for the loss of five wickets during the 10.3 overs chasing the total of 109 runs. His wicket slipped Patriots to 54 for the loss of six wickets in the next delivery.  Patel was visibly angry on the decision and took his time to get out of the ground ranting at the official. Patriots eventually won the match by a wicket to secure final berth.

Patriots skipper Gyanendra Malla said that the umpiring errors are getting repetitive. “I know it’s human mistake but these things are getting repetitive. These are crucial matches and I am sure nobody wants a bad decision changing the course of the match. Organizers and the technical officials need to think about that,” said Malla after the match.

Patel has admitted the Level-2 offence and accepted the imposed sanction of 75% of his available match fee and 3 demerit points. 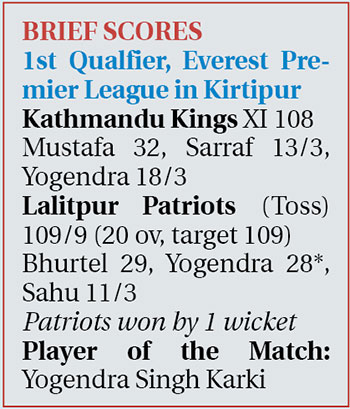 Meeting of the ruling coalition begins
13 minutes ago