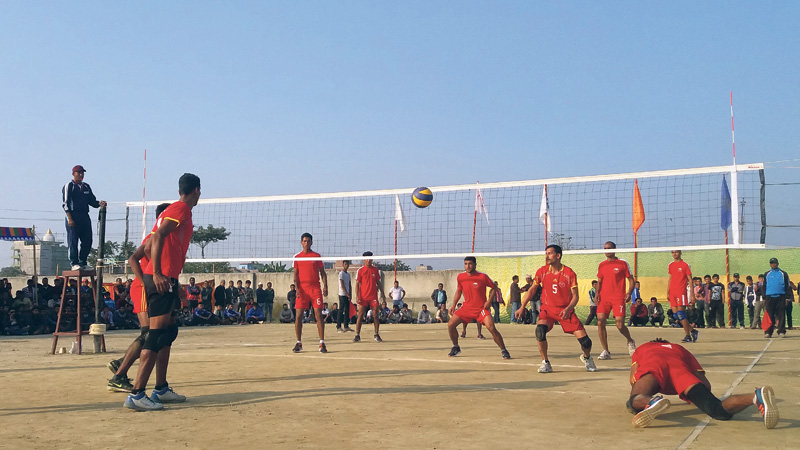 A volleyball match being held outdoor in Itahari on Sunday. Photo: Amar Khadka/Republica

BIRATNAGAR, Dec 26: "The Seventh National Games to be held in the Eastern Region will be conducted in the best ever sports infrastructures in the history of all National Games held so far. The seventh edition will set a milestone in terms of facilities to be used there," Keshav Kumar Bista, the member secretary of National Sports Council had made an ambitious declaration two weeks ago during a program organized to brief about the Games in the Capital.

The National Games which was formally inaugurated on Friday by President Bidyadevi Bhandari is running somehow making a mockery of the claims made by Member Secretary Bista.

Eastern Region is hosting the National Games for the first time in the region since it began some three and half decades ago with a conincidence of Bista being a local of Itahari, a town in the Eastern Region. He is involved in party politics of CPN-UML based in Itahari, which is hosting the highest number of games. Bista himself being the topmost executive of the supreme sports authority in the country was excited to organize the biggest sports festival in his hometown.

Expressing his excitement and feelings, Bista had said, "We are organizing the next edition of the South Asian Games and we have taken the National Games also as practice matches for the sub-regional sports festival."

The Eastern Region is very rich in sports culture and it hosts dozens of renowned football tournaments round the year. Good managerial experience and overwhelming public support and also infrastructures that are already in place were key to the Member Secretary Bista's confidence to make lofty announcement. However, Bista and his team failed to benefit from that and the ongoing National Games have witnessed weakest ever infrastructures and worst management so far. Among others, the weak infrastructures of shooting, cricket, taekwondo, volleyball, has totally proved Bista's claim wrong.

Excavator were still busy preparing the surface of cricket ground when APF and Mid-western Region had already reached the Baijanathpur cricket ground for their fixtures on Friday. The cricket match was played on mat rather than pitch. The match kicked off late than the scheduled time without properly preparing the ground.

Following the completion of 20-over match after nearly four hours, veteran Nepali international Shakti Gauchan expressed dissatisfaction over the pitch. "I have never played in such a pathetic ground. It feels like running on recently ploughed field while fielding," he said.
"The surface of the grounds is not even and there is high risk of injuries while playing in such ground," he said. Referring to Nepal's next ICC World Cricket League fixture against Kenya scheduled for March 11 and 13 he said "Nepal's national team is playing an important match in near future and it is essential for players to be injury free at the moment. To have national games' fixture in such pathetic ground is really disappointing."

It was fixed in 2011 that the next edition of the National Games would be organized in Eastern Region in 2013.  However, the Games was held three years later than scheduled time and the works to prepare the cricket ground started only one and half months ago.

"We did our best to bring the ground in such shape in short span of time. The condition of ground would have been much better had we got enough time and money to prepare ground," said Mohan Budhathoki a local cricket player, who was involved in ground construction. "We were able to plant grass and grow it up to 35 yards in short time. We could have planted grass in the whole ground had there been enough budget for that. But the NSC was reluctant in giving both money and time," he said.
Bista however, complained that only Rs 2 million was allocated for infrastructure for the National Games. "The amount allocated is not even sufficient for lining and cutting grass. However, we utilized regular budget for infrastructure development."

Bista who could not keep up his own promises however has some readymade excuses to cover his weaknesses -- short term preparations due to late allocation of buget, insufficient budget and other reasons.
The condition of under-construction shooting range in Baijanathpur was poor as the game kicked off on Saturday. The construction workers were busy in plastering the outside walls of shooting halls and tarpaulin were used to cover the roofs instead of corrugated sheets on the roof due to time crunch on Saturday. The shooting target was yet to set and the event started four hours later than scheduled time.
The construction of shooting range started eight months ago with budget allocation of Rs 6 million.

However, the local authority complained late allocation of budget for the delay.

Similarly, volleyball was played outdoor even without lying mat on the floor while the covered hall to feature taekwondo was roofed by tarpaulin.

IBN finalizes agreement with NepWaste for management of municipal waste

KATHMANDU, March 7: Investment Board of Nepal (IBN) has concluded negotiations with NepWaste, a Nepal-Finland joint venture, for the management of... Read More...

KATHMANDU, July 7: It has been almost 15 years since Karnadhoj Kafle, a street vendor, has been selling goods on the... Read More...