KATHMANDU, Dec 17: Player-of-the-match Sunny Patel registered the best bowling figures of the Everest Premier League (EPL), helping Lalitpur Patriots finish on the top of the points table as the team defeated Bhairahawa Gladiators by six wickets in a group match played at the TU Cricket Ground in Kirtipur on Sunday. Patriots bundled out Gladiators for 92 runs before chasing the target in 14.2 overs.

Patriots has won four matches on the trot to qualify for the first qualifier with eight points after the completion of its group matches.

Gladiators are placed second with six points. The winner of the first qualifier will directly enter the final. If lost, it will get another opportunity to play second qualifier against the winner of the eliminator match which will be played between the third and fourth placed teams. Patriots also has a positive net run rate of 1.7 compared to closest competitor Biratnagar Warriors with -0.075.

The bowler from Gujarat, Patel, picked up five wickets to provide early dents to the Gladiators innings opening the bowling for the Patriots when the team won the toss and elected to bowl first. The mystery leg-spinner dismissed Muhammad Naveed as his first wicket of the memorable day with the ball. Naveed, the UAE fast bowler, was sent in to open the innings as a pinch-hitter but failed after getting stumped out by Jaikishan Kolsawala.

Similarly, Patel castled Pradeep Airee to send back both the openers for two runs each. His biggest scalp came in the form of Sharad Vesawkar who was trapped LBW after trying to play a rising delivery on the back-foot. Patel further dismissed Kushal Malla and Krishna Karki to complete his five-wicket-haul in the league.

Singh lost his stumps off an inside-edge after scoring three boundaries and two sixes during his 15-ball stay. Likewise, ten Doeschate was caught by Kushal Bhurtel at the boundary line after a missed attempt for another six. He had scored three boundaries and a six during his 36-ball stay. Lalit Rajbanshi was the other wicket-taker in the match for Patriots clean bowling Aarif Sheikh.

U-19 national team member Sandeep Jhora shared an unbeaten partnership of 30 with Jaikishan Kolsawala to seal the match for Patriots. Jhora made 18 runs from 10 deliveries which included two fours and a six.

Likewise, Kolsawala opened the batting and stayed unbeaten on patient 22 runs from 27 deliveries including a four. U-19 allrounder Pawan Sarraf scored crucial 25 runs from 36 deliveries which included two fours and a six after Patriots lost Gaurav Tomar and skipper Gyanendra Malla for 9 and 4 runs respectively.

Ryan ten Doeschate picked up two wickets whereas Vesawkar and Naveed shared a wicket each in Gladiators’ second successive defeat after winning the first three.

Kathmandu Kings XI will face Biratnagar Warriors on Monday. Kings XI will look to win to finish in the top two above Gladiators to play in the first qualifier whereas Warriors will need to win to make sure they are qualified for the playoffs after Chitwan Tigers won its last match against Pokhara Rhinos on Saturday and tied on four points with Warriors. 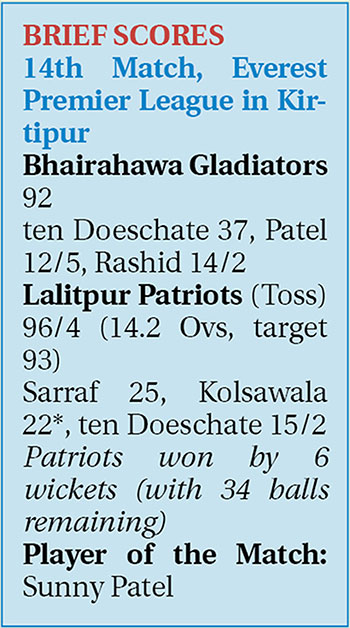