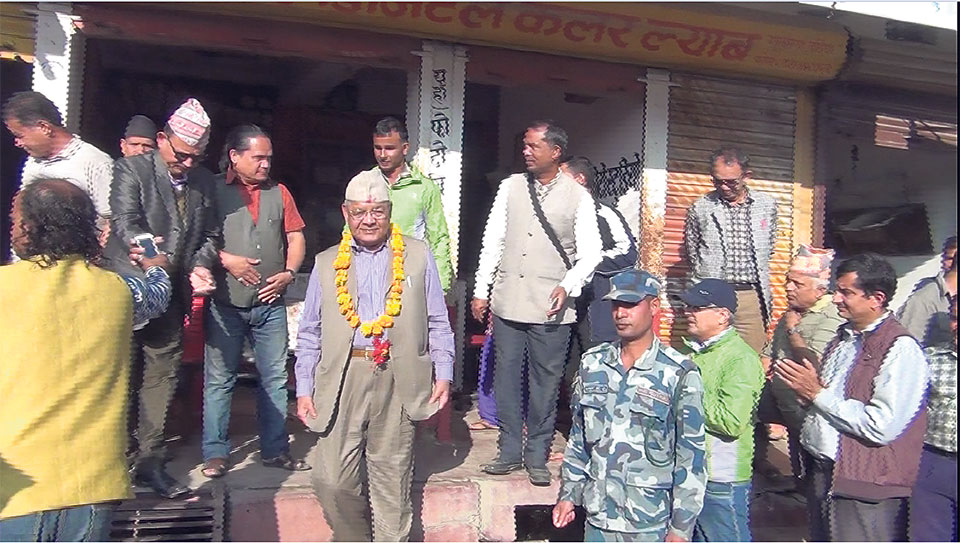 BARDIYA, Nov 13: In the last few years the country has gone through rapid and dramatic political developments. On the other hand, economic and infrastructural development has almost been limited to lip service. Nevertheless, political parties and leaders are not shying away from making tall promises to people during their poll campaigns. As always some of them have been simply heightening assurances to voters as it its considered a normal practice to woo voters.

Later, neither the leaders look embarrassed about their unfulfilled promises nor do the public in general questions them about it. This has been the trend almost everywhere across the country, but not in Bardiya.

Voters here have dragged politicians into trouble by questioning them about their unfulfilled promises. By being strongly vocal against making ‘fake promises’, they have been warning leaders for either not making any promises or delivering what they promise during the campaign trail.

One of the politicians who is having tough time with the voters is former minister and vice president of CPN-UML, Bamdev Gautam. Gautam, who has been active in politics for the last three decades, has won many elections during this time. Though he has an image of ‘national leader’, voters say that they are not impressed by his experience. And as such, whenever he approaches voters, he has been receiving a volley of questions about his earlier assurances. Gautam is contending for the parliamentary seat of Baridya-1.

“Getting ticket for contending in the election was not hard for Gautam. But facing the voters has not been easy. They have become smarter than leaders think,” commented a cadre of his own party, CPN-UML, requesting anonymity.  “Voters say that the assurances that he had distributed to the voters in the past elections, are not fulfilled,” he added.
Locals surround Gautam and attack him with accusations that he never cared about the developmental projects he had earlier promised of. “When many voters surround you and all of them verbally attack you by reminding your past promises, what choices do you have other than to stay quiet? He does not have appealing answers to calm them down. Politics is not an easy thing when you have to face such voters,” the cadre said.

According to the locals, during the election of 1992 and 1995, Gautam had won due to the votes of the middle and lower class voters. During these election campaigns, he had been very vocal against feudalist and the system and this had won him their support. However, the election pledges remain unfulfilled so far, they say.

Each election, leaders visit voters with the agenda of agriculture and industrialization. But they hardly deliver. According to the cadre, Gautam could not stand out from the ‘fake leaders’.
“Meeting people has become a difficult task now. But there election and we have to be in the field,” he said.

With the low and middle class people remaining unimpressed with Gautam, this elections remains tough for him, the cadre noted.

But that was one side of the story. Gautam’s major competition, Nepali Congress’s Sanjay Gautam, is also facing similar volley of questions from the voters. Sanjay who is contending the elections for the third time and is the incumbent minister for irrigation, has been facing the wrath of the voters for the unfulfilled promises he made for winning during the second Constituent Assembly elections from the district.

Sanjay had pledged, among others, to build better roads in Gulariya Municipality, to build embankments and to improve Indo-Nepal border check post. With these major agenda, he had positioned himself as a pro-development leader and was subsequently a favorite of the voters, locals say.

“He has been acting as he is dumb when we ask him why he gave hollow promises during the Constituent Assembly elections. We voted for him, because at the time he had promised to deliver things that we seriously needed,” said a voter, Meera Sharma.

“Though people mostly voted for the party they felt good about, but that is gradually changing. Instead of political ideologies, a candidate’s profile, strength and integrity are becoming decisive factors in swaying voters,” she added.

“In the old days, you would be either strictly congress, or communist or third party. You would not think before casting vote. But I feel that people are not so foolish anymore. They look at the candidate, they watch their performance. Because of such voter tendencies, I don’t think leaders and future leaders will be able to get into power by fooling the public,” Sharma stated.

She added that she is going to vote for and campaign for ‘the best leader in sight’. Since the new leadership is going to be in power for long and will play crucial role in developing and shaping the future of our area and the nation, we should select our candidates wisely, she opined. “I will not take it lightly and have been urging others also to use their rights equally wisely,” she said.

Jokhan Chaudary is originally from Motihari, India. He is unsure of his exact age, but knows that he is over... Read More...