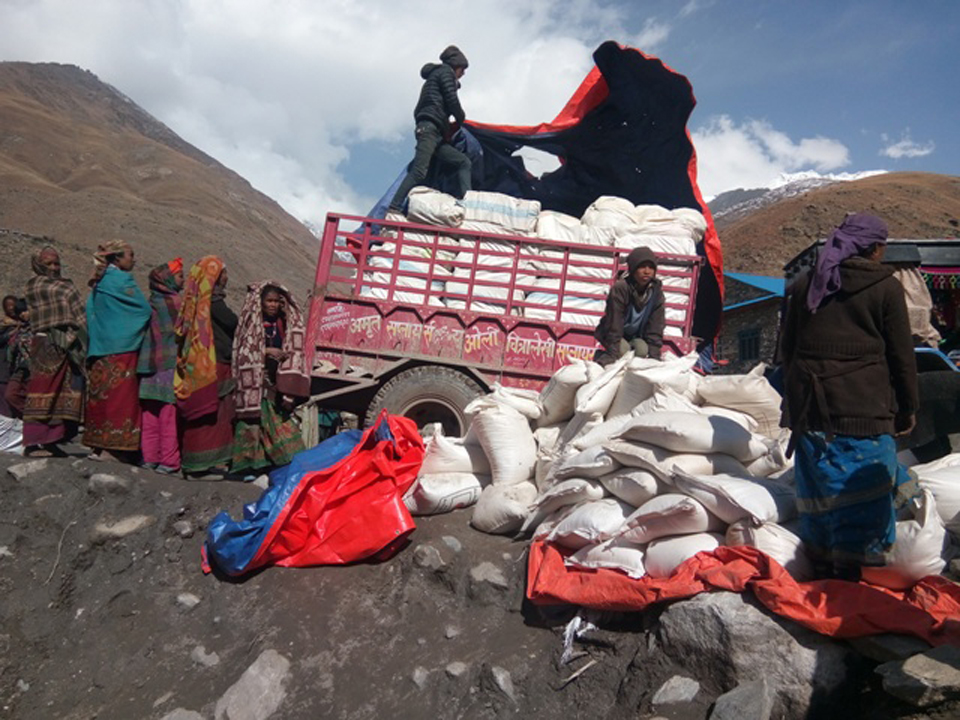 Passengers unloading their bags on the way to Nepalgunj.

DOLPA, Feb 21: Susmita Shrestha of Tripurasundari Municipality-1, of Dolpa was on cloud nine after hearing that she will one day be able to catch a vehicle from her doorstep. It was her dream to travel to Nepalgunj by taking a vehicle from her own locality.

Her dream finally came true when Dolpa was connected to the national road network recently. By cancelling her air ticket, she decided to go to Nepalgunj in a jeep to take advantage of the newly opened road. After packing up her bags, she took a vehicle from Tripurasundari-9, Chalgad.

Two hours later, the assistant driver told her that the journey has ended and now she will have to take another jeep. Carrying her heavy bags, she had to walk for a while to catch another vehicle. She had heard that she will reach Nepalgunj in two days but it took her three hectic days instead.

By neglecting the pleas of the passengers, the driver operating of jeeps and buses along the Jajarkot-Nepalgunj route often compel them to change vehicles in the middle of the way. After changing six vehicles on the way, Shrestha regretted her decision to cancel the air ticket.

Shreekarna Bohora of Tripurasundari-4 stated that all the passengers had to go through a difficult time during three days of travelling. On November 20, Deputy Prime Minister, as well as Minister for Defense, Ishwar Pokharel had inaugurated an event to mark Dolpa's connection with the national road network.

However, comfortable travel is still a far cry for the people here. Locals have urged the government to complete the construction of 13 motorable bridges so that travelling to Nepalgunj will be less lengthy.

Apart from the hassles, some passengers also have to deal with the monopoly of vehicle operators in terms of fares. Jeeps charge Rs 700 per passenger for travelling from Charebagar of Rukum to Khadang of Dolpa.

As per the prevalent rate, jeeps should have charged Rs 375 per person for travelling 16-kilometre distance from Khadang to Chalgad.

However, the jeep operators charge at least Rs 500. Likewise, passengers are made to pay Rs 400 for travelling from Chalgad to Khadang when the normal fare is Rs 275. Jeep operator Devraj Shahi admitted that some of the drivers are even charging Rs 500 for the same distance.

DOLPA, April 5: Getting fresh textbooks along with the beginning of the new academic session is usually a moment of... Read More...

GULARIYA (Bardiya), Sept 22: Krishnasar Transport Entrepreneur Committee (KTEC) in Bardiya has halted the plying of its vehicles for the... Read More...