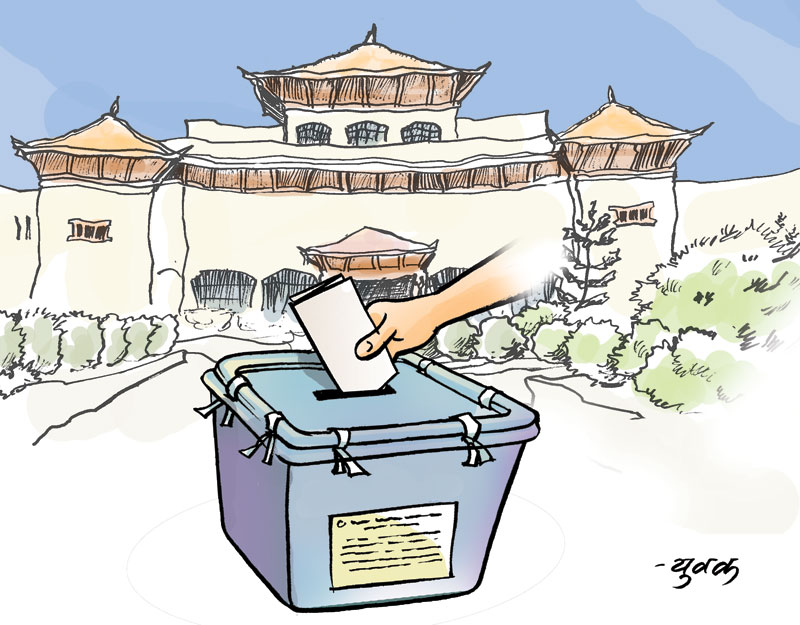 The parliament should immediately correct this constitution-defying apartheid law and allow all parties to use their party symbols as electoral symbols
Apartheid is a term used to signify deep institutional discrimination, where there are distinctly different rules for different citizens/institutions. Let’s take the example of the World Cup football tournament. We all know that even the winner of the previous World Cup will have to compete just like all other teams for a place in the next World Cup. Would you still watch the World Cup if there were easy rules for old teams (that won before) and harder rules for the new teams (the underdogs)?

I am sure you wouldn’t. Well, something similar just happened. In the first local election in 20 years, there are two distinct rules, which favor the old and discriminate against the new. In essence, when in a month voters go to vote for the “right leaders in the right places” they will be compelled to vote for the same old cronies or not want to vote at all because they can’t find the underdogs’ symbols in ballot papers (or be confused as they will have to choose different symbols in different places).

Since its inception, for the last three years BibekSheel Nepali party has vocally lobbied for local election to be held before any other elections as this allows people to put right leaders at the right local places. We were most excited that after nearly 20 years, local election is finally happening! This is the perfect opportunity for Nepalis to select the right local leaders who will directly impact their daily lives. We have been fighting hard to protect the rule of law by fighting against Lokman-tantra, to serve our nation through servant, selfless leadership like we did during the earthquakes two years ago. And for the first time, we were excited to be taking part in the election as a political party.

So one fine morning only a few months before the local election we were shocked to hear that we had been sidelined. The parties in the parliament silently conspired to approve an apartheid law that prevents political parties outside the current parliament from having any electoral symbol, thereby putting all other parties’ status in limbo. For nearly three years we had been reassured by the Election Commission that we can legally contest elections as a political party with our own symbol.

And we are widely known by our “smiling Nepali” symbol (). But now the constitutionally-empowered commission admits helplessly, “I am sorry, your candidates cannot have the same symbol. Each and every one of candidacy will have to get a separate symbol, as independent candidates. You have to act as a party the rest of the time, but you cannot when fighting elections”.

We asked why the parties in parliament get to fight as a party, but not us? Election Commission responded, “because it’s in the law”. We asked, “who made such a law?” They responded, “the parties elected through the Constituent Assembly who turned themselves into a parliament.”  We were bewildered.  ‘Multi-party democracy’ only works if the same set of rules is applied to all competing parties in elections. Otherwise it becomes just a facade, a return to panchayat and a direct attack on the democratic ideals we all hold dear.

You might reason, so why is this even a big deal? The big deal is that all new parties challenging the status quo, corruption and incompetency would be compelled to fight against the old syndicate of parties under rigged rules. They have to enter the field with hundreds of symbols (one for each candidate), while old incumbent parties like Congress, UML, Maoists and RPP would conveniently have one and only one symbol for all their candidates. Here’s an example of why party election symbols are most important in a multiparty democracy. In the first Constituent Assembly elections, Suprabha Ghimire, the then leader of Nepali Congress got elected with tens of thousands of votes with the “Tree” symbol. When she was not given the “ticket” to fight again in the second CA elections, she had to fight as an independent candidate taking an independent symbol. Guess how many votes she got. Less than a hundred. There is thus huge difference between fighting under a unitary, branded party symbol and fighting as independent candidates with a new symbol every time you fight.

Our country spans over 147,181 square kilometers (sq km). The Kathmandu metropolitan city covers just 50 sq km and even in this small space, we will be electing 162 local leaders. Sadly, If you support change, then to vote for new political parties (outside the parliament) you will have to remember hundreds of different symbols each, for positions such as mayor, deputy mayor, 32 different ward chairpersons, 32 different ward members, etc. Imagine, how many symbols will you need to remember if you want to direct voters in 744 similar municipalities all across Nepal? The parties in parliament can use just one symbol, their own party symbol. It seems that multiparty democracy has been poisoned in the urgency to hold local election.

How would you even fit a banner with hundreds of symbols for your party? Imagine how your “parcha” would look. How will a voter know whom to vote? And to top up this idiocy, unlike the old parties in parliament, the parties outside the parliament won’t even know what the symbols of their candidates will be until 12 days before the election. Compare that to the parties in the parliament, whose symbols voters have been familiar with for years if not decades! Now tell us if this is not apartheid multi-party law!

The old parties want to prolong their stay in power through such ‘policy corruptions’. The Local Elections Act is glaringly inconsistent with the spirit of our new constitution. When the rules are ‘gamed’ to favor a few parties in parliament, are we in a danger of institutionalizing policy corruption by forcing millions of Nepalis to vote for “selected leadership” in the local election?

The question now arises: Do we have a multi-party democracy or a syndicate paritocracy (Panchayat 2.0)? If you want multi-party democracy then we are all on the same side and we got to band together to protect our democracy against such a vicious attack to Nepal’s local governance. Otherwise Nepal’s future is bleak.

Elections are the only way Nepalis directly get to choose the leaders they deserve. Already one out of three Nepali voters is out of country and hence cannot vote. The rest are forced to choose among the old parties in parliament. What future can we expect for our beautiful nation? What kind of results can Nepalis expect when rules are gamed to favor certain parties in power against the parties on the outside trying to challenge them? Imagine if in exams you were given tougher rules but others are given easier rules, wouldn’t you feel outraged? That’s the situation for upcoming leaders who are challenging the status quo as well as the corrupt leadership in Nepal.

Do you want to see the same old parties that have not delivered in the past 20 years to keep ruling, forever? Are you outraged that they create such unconstitutional rules making it difficult for new parties to come and lead Nepal? Isn’t it high time that we raise our voice against such apartheid laws?

Clause 2 (c) under Article 17 of the Constitution of Nepal on the right to freedom specifically states that every citizen has the freedom to form political parties and Article 269 of the constitution states that people who are committed to common political ideology, philosophy and program may, subject to laws made under sub-clause (c) of clause (2) of Article 17, form and operate political parties, and generate publicity in order to secure support and cooperation from the general public for their ideology, philosophy and program or carry out other necessary activities for this purpose. But Local Level Election Act 2073’s Section 26 (6), (7) provision allows only those parties represented in the parliament to use their own symbols in the elections, which violates the above article of our constitution.

Such provisions prevent Nepalis from exercising their sovereign right as guaranteed by our new constitution that we all fought so hard and painfully for. To keep parties from using their party symbols and forcing them to run as independent candidates is equivalent to denying their existence, which is against universal principles of multiparty democracy. How unjust is it that Nepal’s election commission asks political parties to compulsorily get registered, compulsorily get an yearly audit, and to follow codes of conduct, but when the time comes to fight an election, they immediately enact separate rules for some: easy rule for parliamentary parties while hard rules for those outside parliament.

It seems some are more equal than others in Nepal’s “multi-party” democracy! When Nepalis are convinced of this after this election, the sudden and bitter loss of Nepali voter’s faith in democracy will be the most dangerous after-effect. So what is the solution?

The parliament should immediately correct this constitution-defying apartheid law. It should immediately make a provision to unconditionally allow all parties to use their party symbols as electoral symbols. In the 21st century, we request the Election Commission to take the bold step of putting candidates’ names and photos on ballot papers. This way, people can easily remember their candidates and not have to worry about many symbols. Election Commission should start taking such bold steps or risk becoming irrelevant or even a puppet to the syndicate Panchayat 2.0 system.

If we don’t immediately rectify this problem in upcoming local election, this will set such a catastrophic precedent that our constitution and multiparty democracy could be derailed by the undemocratic attitude of a few select parties. Millions will lose faith in multi-party democracy. With frustrated new generation marginalized, support for progressive, reformist forces will erode, further boosting extremist, undemocratic ones. And Nepal will keep finding itself in a vicious cycle of being ruled by a syndicate of unaccountable and unjust political parties by turn. After 30 years, we will be back to Panchayat 2.0.

The author is the president of Bibeksheel Nepali Party

Govt decides to reduce tax on petroleum products
34 minutes ago