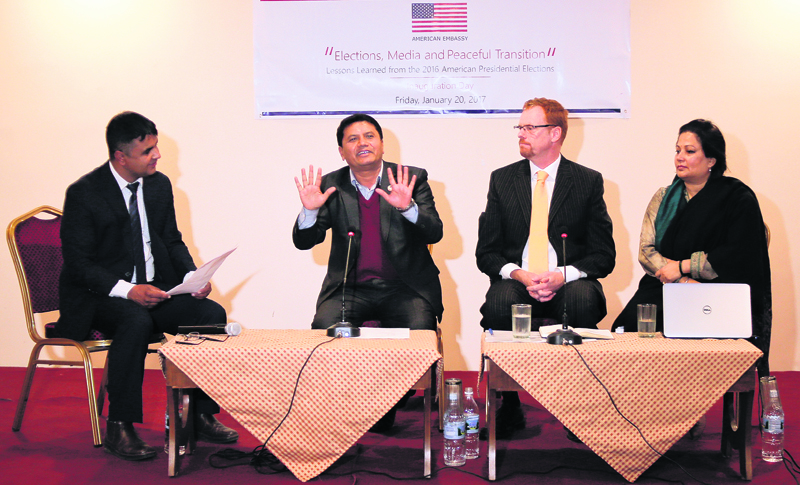 Dinesh Gole/Republica Election Commissioner Ila Sharma (R) and Memebr of Parliament Rabindra Adhikari (2nd L) discuss about the elections of Nepal during a function entitled Elections Media and Peaceful Transition organized by the US Embassy at Hotel Yellow Pagoda in Jamal, Kathmandu on Friday.

KATHMANDU, Jan 21: Chairman of the parliament's development committee Rabindra Adhikari has alleged that the government and political parties were not serious about holding election even as the constitution clearly states the term of the current parliament.

Addressing a function organized by the US Embassy in Kathmandu on the occasion of the newly-elected President Donald Trump assuming the office as 45th president on Friday, Adhikari argued that the problem of not holding election on time is not going to be resolved unless the political parties change their attitude.

“There have been demands to specify the election date in the constitution itself to ensure timely election. The constitution we have now has set the expiry date of the current parliament. Yet there is no real willingness to hold the elections,” said Adhikari, while addressing the function entitled Election, Media and Peaceful Transition.

“Even if the poll date is mentioned in our constititution just like in the US, the political parties will simply sidestep it.”

Three tiers of elections need to be held by January 2018 in order to implement the new constitution. As elections are not held in Nepal on a periodic basis, there have been demands from various quarters to mention the election date in the constitution.

Sharma also argued there should be a provision of state funding to the parties based on the number of votes and seats won.

On the occasion, journalist Tilak Pathak had presented a paper on the role of media in Nepal's election.

During the function, five journalists, who covered the US Presidential election 2016 had shared their experiences about the US election campaign. They argued that Nepal should learn from the US about the certainties of periodic elections and peaceful transition of power.

KATHMANDU, Nov 30: Amid protests in various parts of the country against the proposed changes in the provincial boundaries and other... Read More...