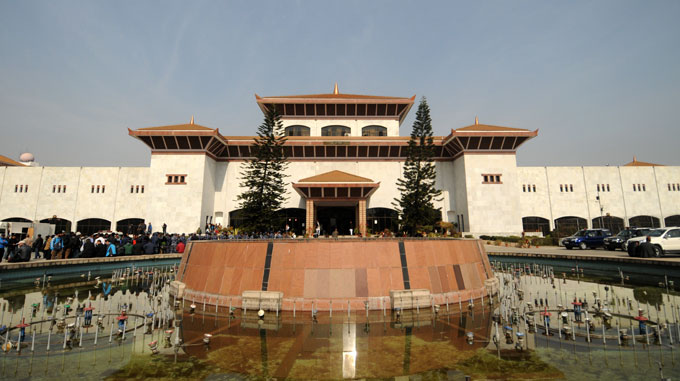 KATHMANDU, June 29: The disrupted Legislature-Parliament meeting is all set to resume from Wednesday itself after  the main opposition  Nepali Congress (NC) backtracked from its stance that the quake victims should be provided Rs 200,000 in a sump sum.

The NC has given up its stance following an agreement among the top-notch leaders to release quake grant in two installments in a meeting called by the task-force today.

The parties have agreed to amend work plan with the consent of the World Bank, said Prime Minister KP Sharma Oli. “The major parties have struck a deal to provide quake grant in two installments," PM Oli told journalists after the meeting.

The work plan will be amended with the consent of the World Bank and the quake grant will soon be released, task-force member Dilanath Giri told Republica Online.

PM Oli is addressing the House meeting following the deal among the parties at 2 pm today.

The NC had been obstructing the Legislature-Parliament meetings since last Friday demanding that the government  release quake grant to the vicitms at one go.

KATHMANDU, Sept 11: Lawmakers have complained that the April 25, 2015 earthquake survivors are yet to get reliefs and housing... Read More...

KATHMANDU, June 5: The House, which had been disrupted following the protest by the main opposition CPN-UML, is set to... Read More...

Quake grant uncertain as many victims still without bank accounts

GORKHA, June 13: Even after over a year since the devastating earthquakes, many locals of Gorkha district, the epicenter, are... Read More...

KMC to implement 'One Ward, One Model School' program
3 minutes ago

Chitwan extends prohibitory order for a week
19 hours ago