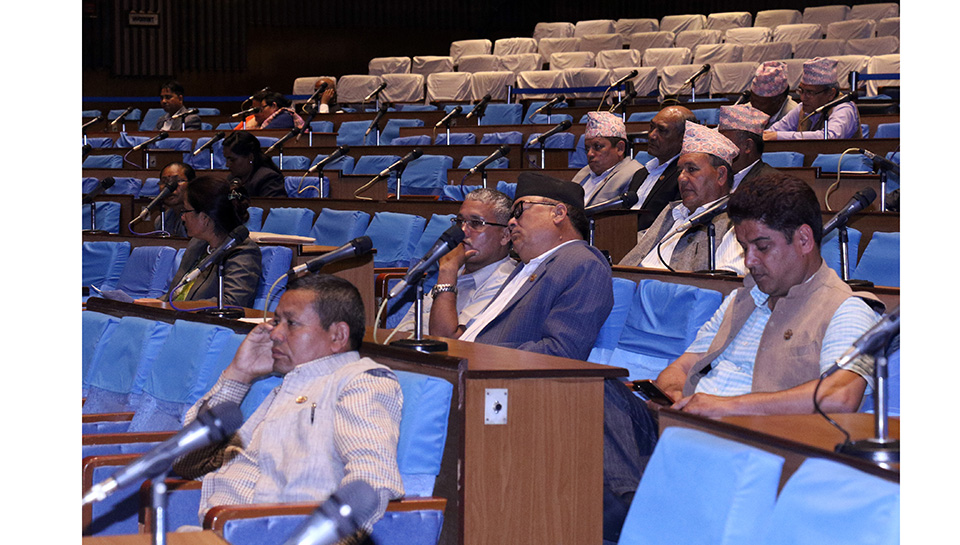 KATHMANDU, June 24: Lawmakers speaking in the 'special hour' of the meeting of the House of Representatives today vociferously protested to the alleged tampering of the marks secured by a university student in the final examination to make him eligible for a gold medal. It is said the marks secured by the student in question were increased in collusion with the employees of the 'confidential section' of the Tribhuvan University, Office of the Controller of Examinations.

Agni Prasad Sapkota expressed concern saying the educational institutions were converting into the places of misconduct and anomalies, referring to the news carried by the press today about the alleged tampering of marks. "What kind of culture is it to add 6 before 9, the marks secured by the student in question, to make it 69 and honoring him with a gold medal," he asked. The land mafia and the go-betweens can take everyone into their influence. The Tribhuvan University's incident is similar and this kind of tendency and culture should be strictly and ruthlessly crushed. Otherwise, development and prosperity would remain confined to paper only, he said, calling the serious attention of the Ministry of Education, Science and Technology towards this.

Among other issues voiced by the lawmakers drawing the government's attention in the special hour include the incident of chaining an elected lawmaker serving jail during his health treatment at a hospital which showed the discrimination to a campaigner of the Tharuhat movement, the movement against the Guthi Bill and the need for annulling some provisions in the bill that are irrelevant, the issue of the dilapidated condition of the bridge linking the Gandaki state headquarters and the urgent need to reconstruct it, and the issue of scrapping of the advertisement calling for application to various local level posts issued by the Public Service Commission on the grounds of it not being in line with the inclusive principle.

Similarly, lawmakers called on the government to act to address the problem of flooding and inundation caused on the Nepal side by the structures like dams and roads built unilaterally by India close to the Nepal-India border in the southern plains, to desist from working in favour of some businessmen allowing them to construct hotels and resorts and operating safari by destroying forests, to build a Bailey bridge over a river on the road leading to Manang at the earliest and to provide shares of irrigation projects and electricity projects for supporting the income of the people of the Karnali province. Those expressing their views in the special hour were Min Bahadur Bishwakarma, Ekbal Miya, Rajendra Shrestha, Khagaraj Adhikari, Jip Chhiring Lama, Maheshwar Jung Gahatraj, Gagan Kumar Thapa, Palden Chhopang Gurung and Ram Bahadur Budha.

Lawmakers called for dismantling Laxmanpur dam Meanwhile, speaking in the 'zero hours' of the meeting of the House of Representatives today, Pushpa Bhusal accused Prime Minister of blatantly violating the rule of law and governing the country in an 'authoritarian manner'. Purna Kumari Subedi demanded that the government construct a concrete dam on the Rapti river, saying 10,000 bighas land on Nepal side in Banke district have been inundated due to the Laxmanpur dam constructed on the Nepal-India border unilaterally by India breaching the international law. Prem Suwal also drew the attention of the government to dismantle the Laxmanpur dam constructed by India at the Nepal-India border in Banke district. Dila Sangraula, Nabina Lama, Parbata DC Chaudhary and Parbati Kumari Bisunkhe drew the attention of the government to forthwith arrest the unidentified group that is said to be creating terror among women in the federal capital by unknowingly attacking them with syringe needles.

Dilendra Prasad Badu called on the government to immediately start a dialogue with the Netra Bikram Chand-led group. Narayan Prasad Khatiwada drew the government's attention to providing tenancy rights to 4,957 tillers in Nuwakot district. Teju Lal Chaudhary, Dev Prasad Gurung, Devendra Poudel and Narayan Prasad Marasini called on the government to provide compensation for the loss of life and property due to floods and inundation caused by rains and to carry out river training works effectively.

Is anti-sedition law killing journalism in the northeast?
19 hours ago

NTA calls off proposal to procure own satellite
20 hours ago

Lack of vaccination, tests creates room for variants in Nepal
22 hours ago