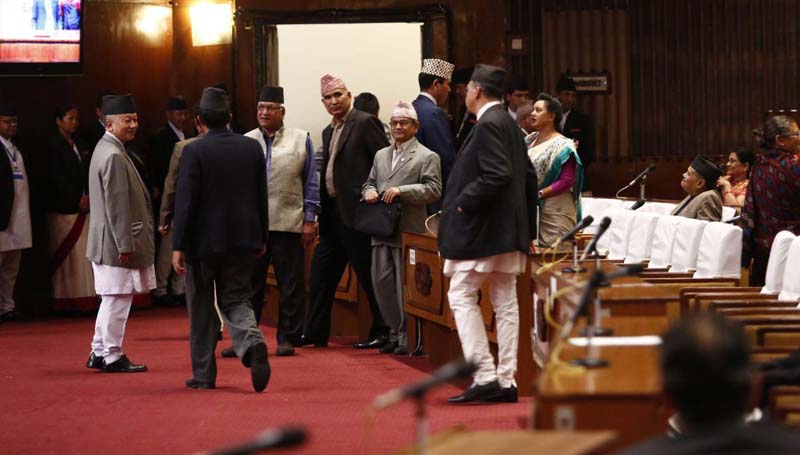 KATHMANDU, May 26: The Parliament meeting called for Friday morning has been put off till Saturday due to the obstruction of the CPN-UML parliamentarians.

The meeting scheduled for 11:00 am was postponed till 4:00 pm on Friday itself.
As soon as the second meeting began, Chief Whip of UML Bhanubhakta Dhakal stood up from his seat and warned that they would not let the House resume unless their demands were addressed.

The next meeting of the Parliament is scheduled for tomorrow at 1:00 pm.
Chief Whip Dhakal said, "Until the government withdraws the impeachment motion against the Chief Justice Sushila Karki, voices its opinion publicly for forming a parliamentary committee to examine the irregularities reported in the first phase of local level election and withdraws its decision to increase the number of local levels in a dozen of Terai districts among others, they will not let the parliament meeting be held."

Speaker Gharti said the demands of the UML had come to her notice, and requested the protesting parliamentarians to be seated but to no avail.

The parliamentarians were reminded that it was the constitutional provision to announce budget on 15th of Jestha.

Since UML parliamentarians continued the obstruction of the meeting, the Speaker announced the postponement of the parliament meeting till tomorrow.

The major parties albeit were in deliberations for opening the interrupted parliament session, no conclusion was made towards this end. RSS

KATHMANDU, March 3: A meeting of the National Assembly scheduled for 1 pm today has been postponed till Tuesday. ... Read More...

KATHMANDU, July 2:The meeting of Legislature-Parliament on Sunday has been put after endorsing condolence motions. ... Read More...

KATHMANDU, May 24: Parliament meeting scheduled for 11 am on Wednesday has been postponed until 4pm on Thursday. As leaders... Read More...