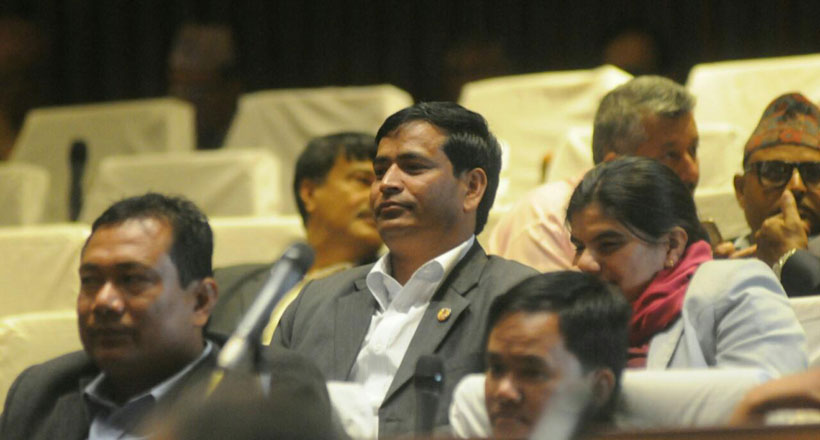 Lawmakers attend the meeting of the parliament. (Dipesh Shrestha)

KATHMANDU, Oct 25: The Parliament has started deliberations on the impeachment motion against CIAA chief Lokman Singh Karki on Tuesday.

CPN (Maoist Center) lawmaker Mahendra Bahadur Sahi has proposed the Impeachment motion against Karki in the Parliament which was seconded by CPN-UML lawmaker Bhanu Bhakta Dhakal.

As many as 157 lawmakers – 107 from CPN-UML and 50 from CPN (Maoist Center) - had registered the impeachment motion at the Parliament Secretariat on last Wednesday.

However, the political parties have been divided over the issue of impeachment motion against Karki.

Holding a meeting earlier today, Nepali Congress, the largest party in the Parliament, decided to come up with an official decision on the Karki’s issue only before the voting.

The impeachment proposal filed in accordance with the Article 101 (2) of the Nepal's constitution and Rule 1 (138) Legislature-Parliament Regulations is the ever-first impeachment case in the country's parliamentary history.

Lawmakers wishing to air their views on the proposal individually will also be given time for the same. The motion presented by lawmaker Shahi was seconded by CPN (UML)'s lawmaker Bhanubhakta Dhakal.

In the impeachment motion, CIAA Chief (now suspended) Karki has been accused of directing the Tribhuvan University to take official action against some doctors in accordance with the provisions of the Interim Constitution even after the promulgation of the new constitution.

He was impeached for exerting pressure on the Nepal Medical Council officials and the concerned University to increase enrollment seats at the KIST Medical College where his close kin are said to own the share. He was accused of unnecessarily interfering in MBBS entrance exams of the Kathmandu University.

Furthermore, he is accused of giving unnecessary trouble to government employees in the pretext of investigating into corruption in contravention of the Prevention of Corruption Act, 2059 BS.

The charge against Karki includes taking revengeful actions against those persons and organizations critical of his performance, causing obstructions in the business of the judiciary and barring a team from the Supreme Court from serving the notice issued by the apex court summoning him to defend his appointment as the CIAA Chief.

Violations of the office code of conduct, misuse of his post, attempt to manipulate the bureaucracy, serious violations of the constitution and existing laws, failure to abide by office responsibilities, lacking competency and bad conduct are other charges leveled against Karki in the impeachment motion.

KATHMANDU, May 27: Today's meeting of the Legislature-Parliament has started deliberations on the government policies and programmes for the fiscal... Read More...

‘More than one reason why impeachment deliberations put off’

Lokman kept himself above law: Shahi (with video)
5 years ago

Karki created panic in all sectors: Dhakal (with video)
5 years ago

Newly-appointed ministers to be sworn in today
14 hours ago