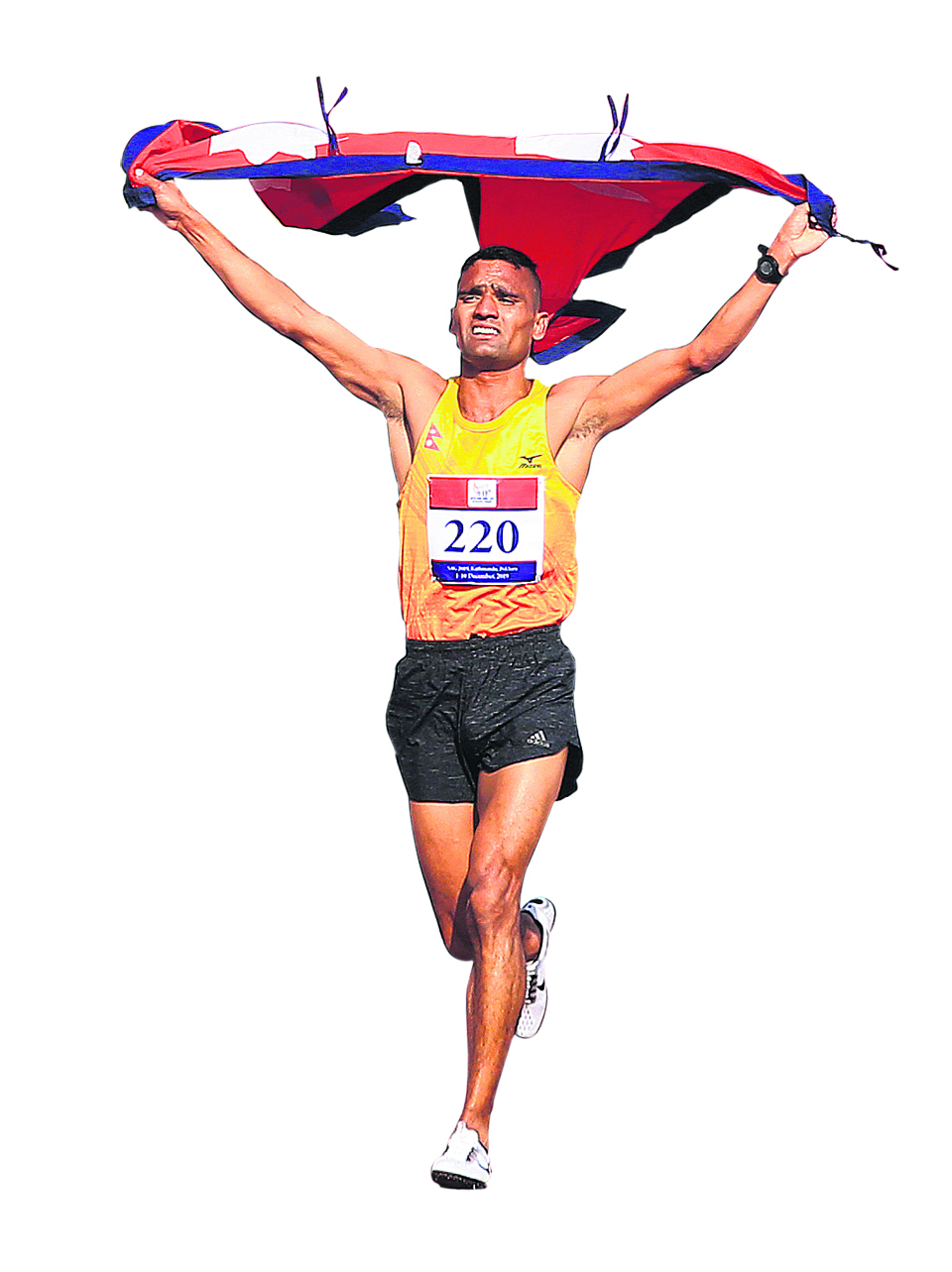 KATHMANDU, Dec 7: There was a sense of excitement at Dasharath Stadium when two Nepali athletes were vying for the gold in men’s 5,000-meter athletics in the 13th South Asian Games (SAG) on Friday.

The race was intense with India’s Sunil Dawar taking a lead in course of the last lap, but Gopi Chand Parki took a big leap and eventually secured the gold for Nepal.

Timing 14:54.20 minutes, Parki became only the fourth Nepali athlete to win a SAG gold medal.
Proud with his achievement, Parki said that the run was strategic and that he took his leap with great caution to become the first man athlete to win the gold in this edition’s SAG.

“When I was behind in the early laps, I had a concern that this run was going to be strategic. So, I decided to not run faster to save my energy for the end,’’ said Parki.

“I could have run faster, but what would I do in the last 10 laps if I did that early on? So I decided to pace up in the last two laps and it eventually paid off.”

“In the last lap, I was sure I was going to win. When I was in the last 20 meters, they covered like a box. This was the dream and hard work of the last 14 years. The ordinary obstructions would not stop me."

Along with Parki, Nepal’s Hari Kumar Rimal won the bronze for the country with a timing of 14:57.05 minutes. It obviously was a disappointment for him, having led the race at some point.
Rimal and Parki were in the contention for the gold early on in the race with the duo facing a tough challenge from Dawar and Sri Lanka’s Samantha Pushpa, who finished fourth. Dawar won the silver timing the distance in 14:55.21 minutes.

Parki was delighted having broken the barren run.  “This gold was the debt I had to pay back the nation. I owed Nepal a gold medal and when I touched the finishing line, I did it,” Parki said.
“Athletics was in a hard state when we did not win the medal for some years, because of the weaknesses of us players. But, that barren run without a gold has been broken in this SAG.”
The stadium roared in excitement and pride when Parki became the first male athlete to claim the gold medal for Nepal since 2010--when Rajendra Bhandari had won one.

The other two prior gold winners for Nepal have been Baikuntha Manandhar, who won three golds in the first three editions, and Tika Bogati in the seventh edition.  However, Nepal’s first female gold winner Santoshi Shrestha could not shine on the day despite taking a lead for the majority of the women’s 5,000 meters.  She was eventually limited to the fourth place. Sri Lanka, who won four golds on Thursday, dominated the day six with three golds, with India and Pakistan behind with two each. In the women’s 5,000 meters, Sri Lanka’s Uda Kuburalage secured the gold timing 16:55.18 minutes, followed by the silver and bronze from India’s Parul Chaudhary and Priti Lamba respectively. Shrestha covered the distance in 17:13.68 minutes.

Sri Lanka won the other two golds in women’s 4*100 meters relay and men’s event of the same category. India won the golds in men’s and women’s shot put events with Tajinderpal Singh setting a new SAG record with a distance throw of 20.03 meters. The previous one was by India’s Bahadur Singh Sagoo (19.15 in 1999).  India’s Abha Khatua won the gold in women’s category with a throw of 15.32 meters.

Pakistan won the two golds in men’s and women’s 400-meter hurdles as Nepal failed to finish top three in both the categories.

KATHMANDU, Dec 2: Nepal finished at the top of the medal tally, by clinching the highest number of medals at... Read More...