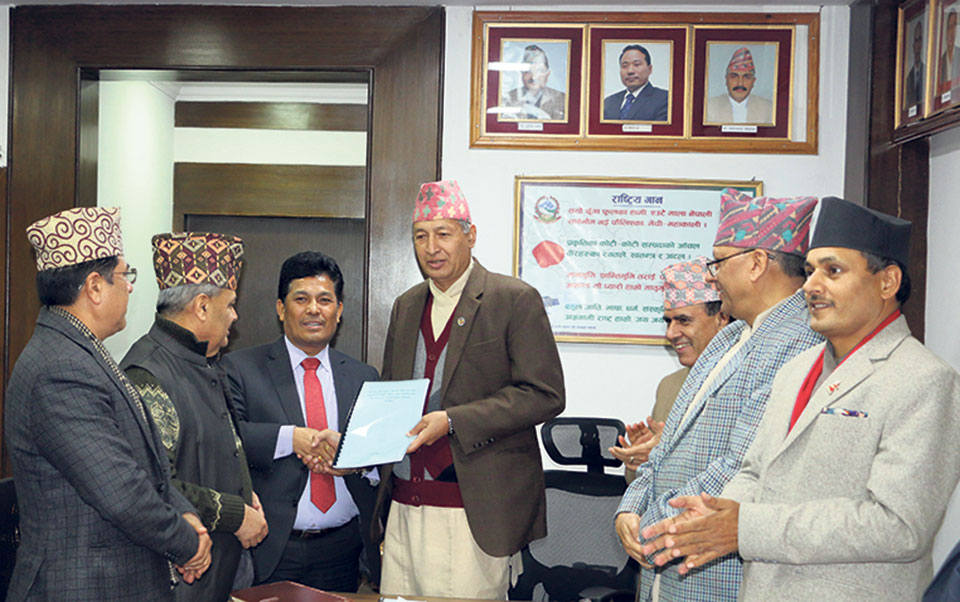 Suggested measures can be implemented within a week to a year

KATHMANDU, Dec 20: A committee formed by the Ministry of Finance to look into the recent financial markets volatility has submitted its report to the Minister for Finance Yuba Raj Khatiwada.

The committee has given to the government 58-point recommendations for interest rates and capital market stability.  The government can pursue these short-term and medium-term recommendations to stabilize interest rates of the bank and financial institutions (BFIs) and stocks, according to Nepal Rastra Bank (NRB) Deputy Governor Shiva Raj Shrestha who led the committee.

“The committee has given recommendations that can be implemented within a week to a year for giving stability to interest rates and capital market,” Shrestha told Republica.

The committee was formed on December 6 through a minister-level decision. It was asked to look into the problems seen recently in the financial and capital market, and give recommendations to the government within seven days.

A joint secretary at the MoF, Nepal Bankers Association’s President, and representatives of Securities Board of Nepal, as well as stock investor organizations, were members of the committee.

Among others, the committee has recommended to the NRB to revise the formula of calculating base rate for the bank and financial institutions (BFIs) and remove return on asset (ROA) rate in the base rate, according to Shrestha.

If this recommendation is implemented, the base rate of BFIs will go down by at least 0.75 percentage point which will also lower the interest rate for borrowers as lending rate are tied with base rate.

Base rate is calculated by BFIs by adding the cost of fund, cost of Cash Reserve Ratio, cost of Statutory Liquidity Ratio, operating cost and return on asset. BFIs are allowed to add 0.75 percent ROA for calculating their base rate.

Another important recommendation by the committee is to cap the interest premium of BFIs on base rate for loans to priority sectors identified by the central bank. According to the suggestion, the interest premium should be capped at 2 percent on the base rate. This means that if a bank has 8 percent base rate, it would not be allowed to charge more than 10 percent interest in priority sectors like manufacturing, tourism, agriculture and energy.

The recommendation to cap the interest premium of BFIs for priority sectors comes in the wake of complaints from the private sector that high borrowing cost was eroding their competitiveness.

To make sure that depositors also get a reasonable return on their money parked in BFIs, the committee has come up with a recommendation to introduce a measure, requiring BFIs to tie up their saving rate with the inflation rate. This measure is expected to end the practice whereby BFIs get deposit by offering very little interest rate. BFIs often fix interest rates for depositors that are far below the inflation rate.

Return on deposit lower than inflation tends to erode the real value of public savings, according to economists.

The committee has also provided a number of recommendations for the capital market. The NRB has been advised to increase the ceiling of a loan to value ratio on margin lending to 65 percent from existing 50 percent. The new relaxation will allow share investors to get more loans from the bank and financial institutions against the collateral of their stocks.

•    Remove Return on Asset (0.75%) from base rate calculation
•    Impose cap of 2% interest premium on base rate for loans to priority sectors
•    Tie up saving rate of BFIs to inflation rate
•    Raise loan to value (LTV) ratio for margin lending to 65% from 50%
•    Increasemargin loan ceiling to 40% of core capital from 25%
•    Allow brokerage firms to provide margin trading

As per the existing provision, BFIs are allowed to provide margin loan of up to 50 percent of the average closing price of the last 180 days or the prevailing market value. Similarly, the ceiling for such loans for the commercial bank should be raised to 40 percent from existing 25 percent, according to the committee.

“Most of the recommendations provided by the committee related to capital market can be implemented. In fact, some of them are already under implementation process,” Rewat Bahadur Karki, the chairman of Sebon, told Republica.

We should not be skeptic of BRI: Minister Khatiwada

KATHMANDU, Nov 19: Minister for Finance, Yuba Raj Khatiwada, has said that Nepal should not be skeptic of China's Belt... Read More...

Revenue collection from domestic sources on the rise