Pandemic takes charm off festival of flowers for farmers (With photos) 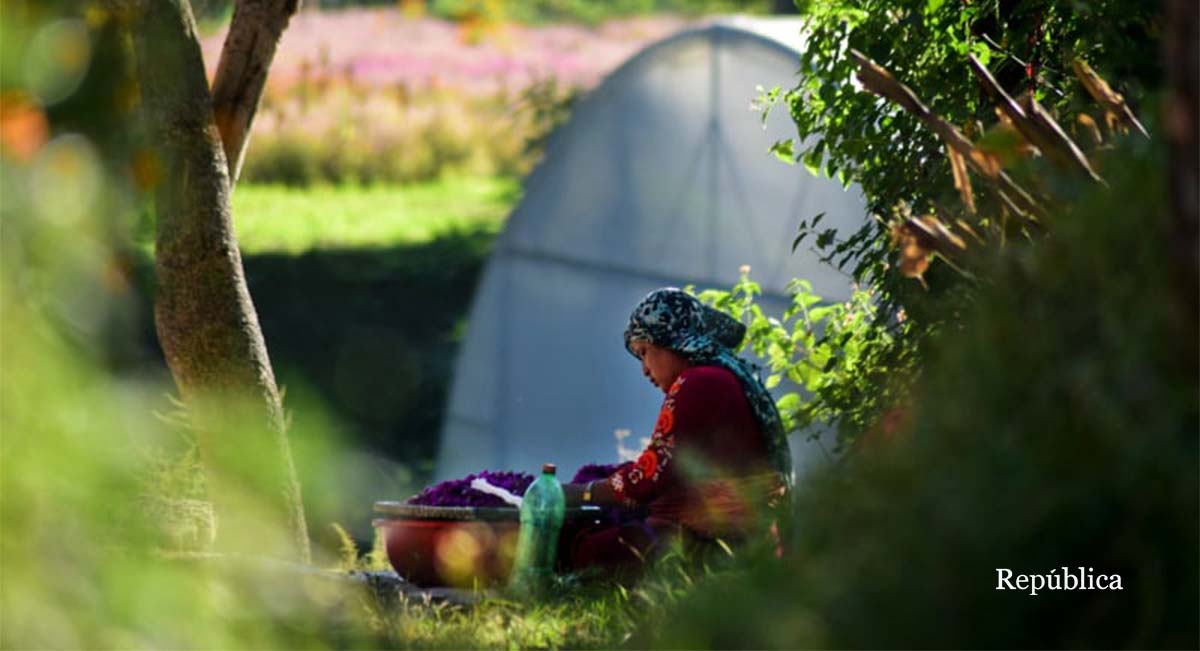 BHAKTAPUR: The family of Laxmi Nagarkoti is busy making garlands of Gomphrena Globosa commonly known as Makhmali flower as the festival of flowers - Tihar - is less than a week away.

Nagarkoti’s family, which got into the business of floriculture a decade ago, used to receive a huge volume of demand during the Tihar festival in the past. The family also exported flowers to a number of foreign countries in the past. But the pandemic this year has taken the charm off their business. 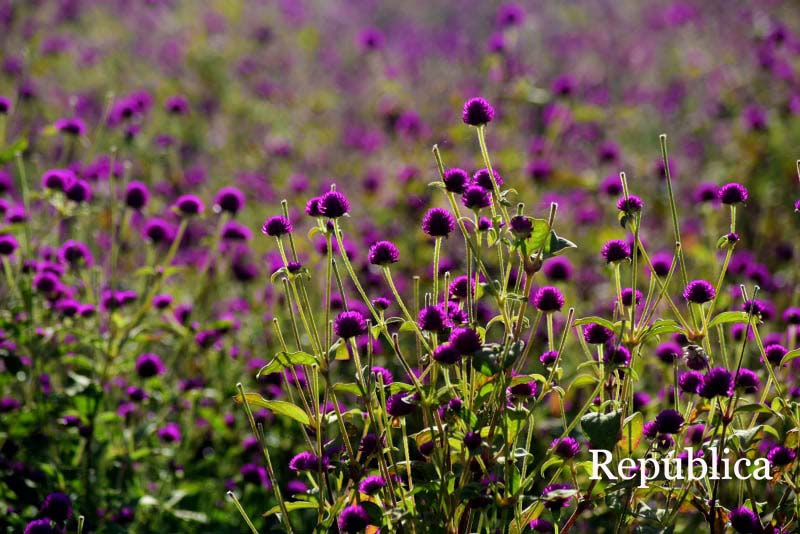 “As compared to the previous years, the production has slumped significantly. This year due to the Corona pandemic, there was a lockdown. In view of the possible impact of COVID-19 on our business, we sowed comparatively fewer seeds this year,” Laxmi Nagarkoti told Republica.

The village of Gundu in Bhaktapur is known for supplying Marigold and Gomphrena Globosa for the festival of Tihar when the demand skyrockets in the Nepali market as well as it goes to the international market. 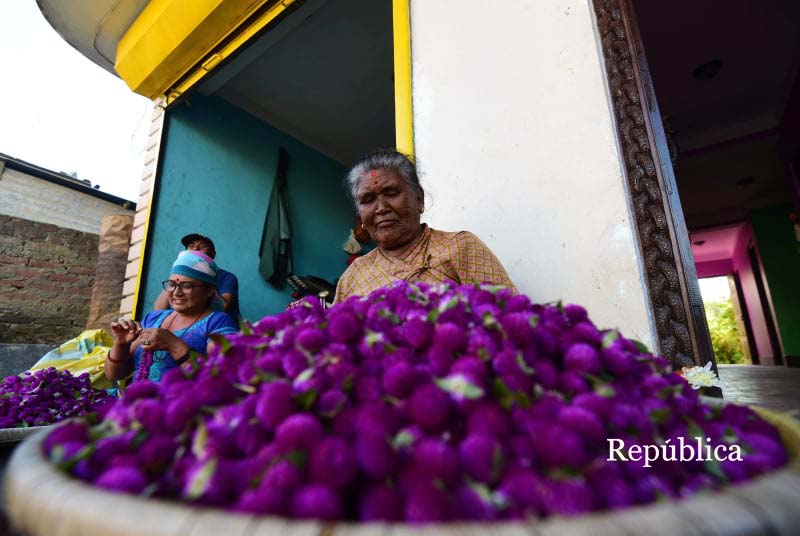 As the COVID-19 pandemic has blocked frequency of flights to and from Nepal blocking the prospect of export, florists in the village of Gundu this year cultivated maize in their fields. This automatically slashed the volume of flower production this year.

“We had a dilemma whether our products would sell off in the market or not. It all started with the imposition of the lockdown and rising cases of the coronavirus. Flights from the nation are now halted. Half of our products are exported annually which now has now come to a halt,” she said. 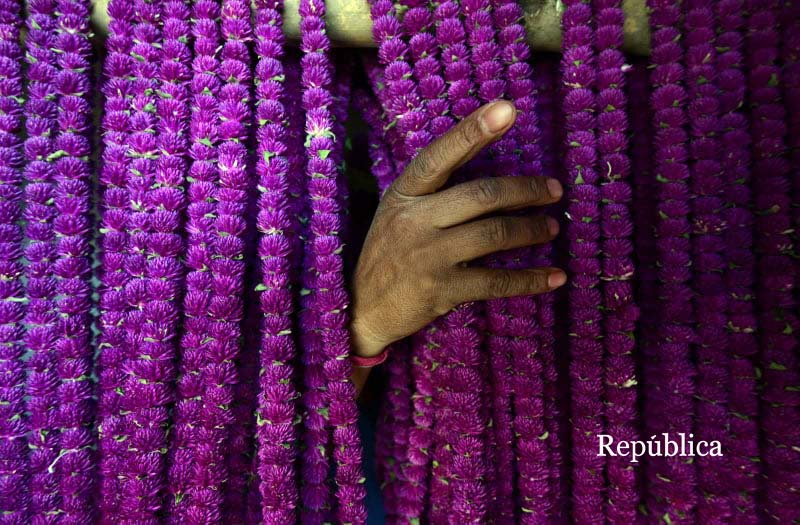 The floral village with predominantly Newar settlement gets into preparations for flowers starting from the month of February. Farmers sow seeds of the flowers by the mid of March and within a month or half the saplings are then transferred to fields and are taken care of.

According to Nagarkoti, flowers get ready to be plucked from the Month of July or August and garlands are made immediately. This year, farmers started it late as the festivals got pushed by a month due to “Malamass' ' when no auspicious ritual or activity is performed. Also, there was the fear of the pandemic. 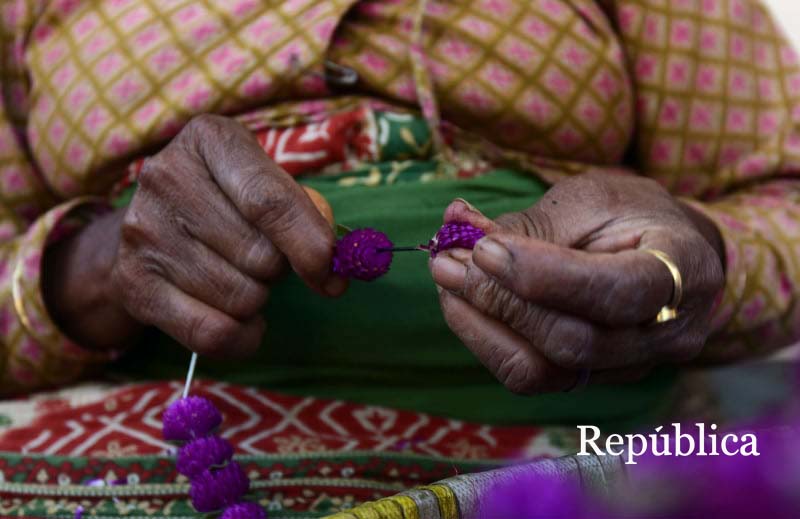 Laxmi Nagarkoti’s family sets off for their fields early in the morning and returns home by 10 AM (Local Time). After having lunch, the family sits in front of their house and pours sacks of flowers and then starts making garlands.

Her family this year is making garlands of 200 to 300 pieces on a daily basis for the upcoming festival of Tihar. Gomphrena Globosa doesn’t wither quickly because of which the farmers get done with it at first and store it in a well ventilated place hanging on various structures. 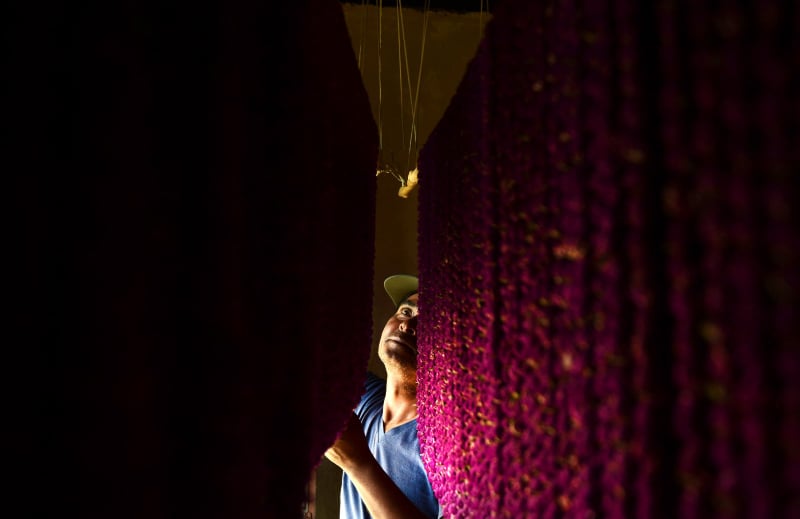 “Some traders come looking for us months ahead of the festival in order to export it to foreign countries. They take flowers in bulk and farmers sell their produce to them. While some farmers cannot sell all their flowers and the remaining flowers are kept on sale at markets around Kalimati, Ason and others in city areas. We mostly sell it to traders and the rate is fixed by them, we just take our flowers to Ason, Kalimati, Kalanki etc,” said Deepak Nagarkoti, Laxmi’s son who has been supporting the family with the business.

Flower traders sold 2.5 million garlands worth Rs110 million during Tihar last year, but this year the turnover is likely to fall by 40 percent as the festivities will be kept down due to the coronavirus.

This year, demand across the country is expected to reach 1.5 million marigold, globe amaranth and chrysanthemum garlands. Traders imported 220,000 marigold garlands from India to cover a shortfall in production last year. Imports have been declining annually with an increase in domestic output. 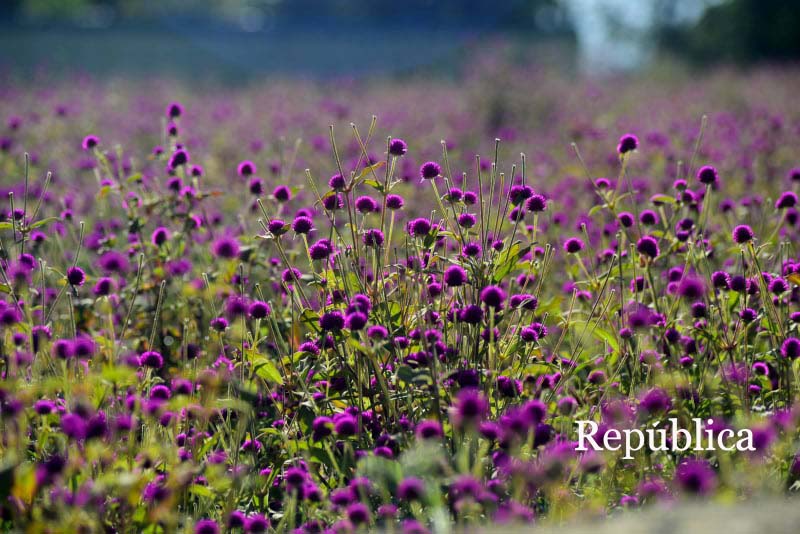 The country produced 2.2 million garlands during the previous festival season. But the output shrank this year due to a lower demand caused by the COVID-19 pandemic.

In the past, domestic production used to account for 20 percent of the country's demand for flowers, and the rest would be imported, mainly from India. But in recent years, locally-grown flowers make up around 90 percent of the demand.

The country imported flowers worth Rs110 million in the last fiscal year while exports stood at Rs 40 million. Imports are down in the current fiscal year and exports are almost nonexistent.

Floriculture is being done on 158 hectares of land and around 44,000 people are directly and indirectly engaged in the sector. There are 800 commercial floriculturists in the country with a combined investment of Rs 6.5 billion.

Bagmati Province leads in the flower business, accounting for 60 percent of the production and sales. Cut flowers and ornamental plants are widely produced in the province.

BHAKTAPUR, Oct 25: Flower farmers of Bhaktapur district are busy picking flowers and sending them to the markets for Tihar. Read More...

Recollecting festival memories in the time of pandemic

Dashain is over, and Tihar is approaching. But the prospect of celebrating with friends and family has become a dream.... Read More...

President did not follow rules and procedures: General Secy Gurung
1 minute ago