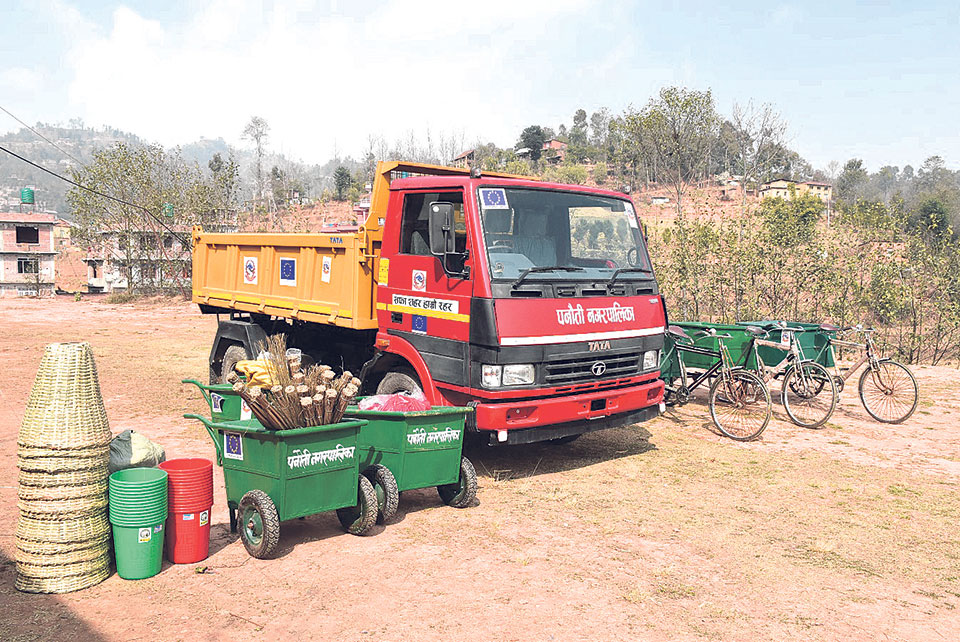 Waste collection equipment and logistics handed over to Panauti Municipality by the European Union in this recent picture.

BANEPA, Feb 26: Panauti Municipality has decided to adopt innovative ways for managing garbage and also creating garbage-based income generation opportunities. With support of some locals and NGOs, it is taking lead to make itself a green haven. According to its Mayor, Bhim Neupane, the municipality has already taken steps towards the realizing that goal.

“We are not only focusing on cleanliness, but also on utilizing the waste by adopting greener waste management practices. We will segregate degradable and non-degradable wastage and manage them accordingly,” Neupane said. “We are developing clean green belts, gardens, and open public spaces. These will establish our municipality as green municipality,” he added.

Garbage management has remained a major challenge for most of the cities including the capital. Lack of dumping sites and inefficient garbage collection mechanism has taken serious toll in cities’ cleanliness. On the other hand, open public spaces have been fast shrinking due to haphazard urbanization. This is true to Kathmandu, Biratnagar, Birgunj and Pokhara, among other cities.

Amid such scenario, the spirit shown by Panauti Municipality is worthy of appreciation, locals say. Locals have expressed full support for the campaign, Neupane said.

“We have unveiled our plan and locals are excited about it. They know their responsibilities in making the drive successful. And they are all full of zeal and support,” he said.

Elaborating on the plans, he stated that garbage would be managed in a scientific way, green belt will be developed in  Punyamata and Rashikhola corridor areas, management of community forests will be improved, open zoo, entertainment parks and low lands will be equally promoted.

“So our concept is to enhance our capacity, generate more income, properly manage waste and drainage systems. When locals realize that they are active stakeholders, this plan is set to be successful,” he said. “The municipality has already started working in several areas,” he added.
Organizations like the IUCN and Women Environment Preservation Committee (WEPCO) have been working in the field of garbage management in the municipality for some time. The municipality has expected even greater support from such organizations in the days ahead.

Management of garbage and internal resources, if done in an integrated way, as the municipality has envisioned and has brought some of the aspects into practice, it will soon be a model municipality, Neupane claims. “We are developing several working models in this regard. We will testing them and adopt the model that suits our needs and resources. We look forward share our experience with other municipalities as well in the future,” Neupane stated.

Training for locals
As part of its focus on raising awareness among the locals, the municipality has provided tools and training to locals to segregate degradable and non-degradable wastes. These two types of garbage will be treated differently, Neupane said.

“We have informed the locals about the nature of waste including what types of garbage decay and what don’t. Waste is not collected from a household until it is ascertained that both types of waste are kept in separate bags,” he said adding that locals have been cooperating very well.

Earlier, garbage management was not an issue in Panauti. The population was not big. Over the years, the city’s population has gone dense with new houses constructed every new year. Neupane states that the municipality has to be smart in managing its waste and urbanization. “Or else, we are also going to be suffer like many other cities across the world,” he noted.

Sujit Karmacharya, coordinator of this Green Panauti’ program, drastic change is expected in a year. Under the project, eight groups of over 100 women have been provided with garbage management training. These women are supposed to share that knowledge with other members of their locality.

“We have taught them everything in detail. Women have been excited also because they have learnt some income generating skills during the training. They make flower vassals, bags, frames etc out of plastics and other wastes. From degradable wastes, they get fertilizer for their garden,” said Karmacharya.

Along with that, the municipality has plans for recycling most of the waste. “Waste is not going to be wasted,” Karmacharya said.

Sangita Syaula, a resident of the municipality who participated in the training provided by the municipality, said that the tips provided to ‘reduce, reuse and recycle’ during the training have been of great help to every household. With greater awareness about waste management and importance of greenery, locals have geared up for meaningful change, she remarked.

Karmacharya stated that the training would be provided to many more people in in all wards of the municipality. “Along with the trainings, we are introduced other plans that will ensure our city is well organized,” he said.

LAMJUNG, May 3: At a time when the political parties are facing hard time in finalizing the candidates for the... Read More...

Two killed in house collapse in Doti
17 hours ago