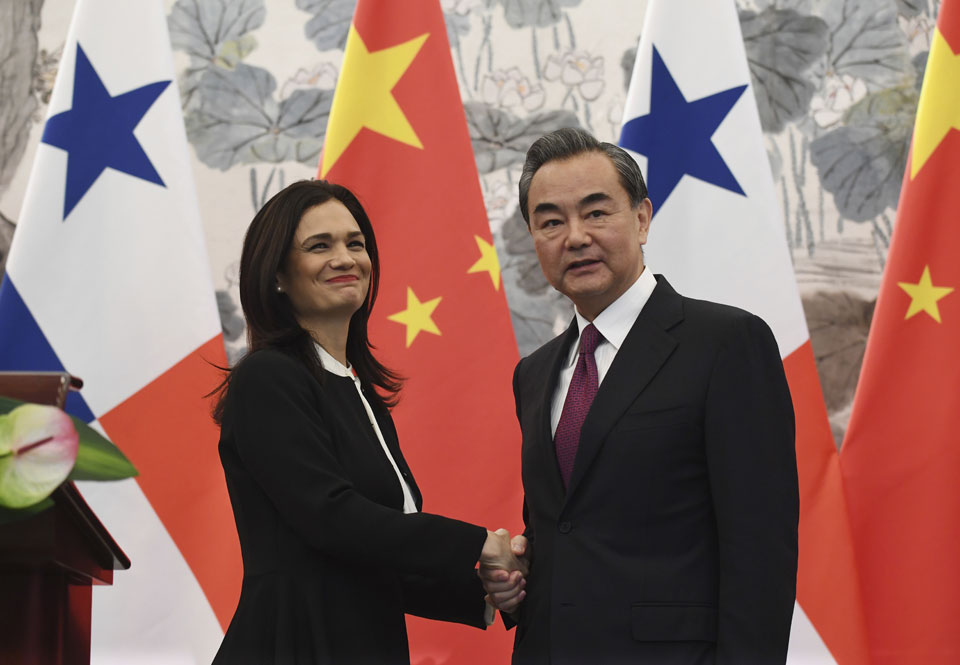 BEIJING, June 13: Panama switched diplomatic relations from Taiwan to China on Tuesday, the latest development in Beijing's drive to isolate the self-governing island it claims as its own territory.

In Panama, President Juan Carlos Varela announced the change which entails breaking off formal relations with Taiwan, saying in a televised address that it represents the "correct path for our country."

A joint statement released on Monday evening in Panama said Panama and China were recognizing each other and establishing ambassadorial-level relations the same day.

"The Government of the Republic of Panama severs 'diplomatic relations' with Taiwan as of this day and undertakes not to have any more official relations or official exchanges with Taiwan," it continued.

Wang said he was sure relations between the two countries would have a "bright future."

Saint Malo said she hoped the new relationship would lead to trade, investment and tourism opportunities, in particular: "exporting more goods from Panama to China."

China and Taiwan split amid civil war in 1949 and Beijing has vowed to take control of the island by force if necessary.

While the sides had maintained an undeclared diplomatic truce for much of the past decade, relations have deteriorated under current Taiwan President Tsai Ing-wen, who took office more than a year ago but has declined to endorse China's view that Taiwan and the mainland are part of a single Chinese nation.

The past year seen China ratcheting up the diplomatic pressure on Taiwan, barring its representatives from attending the World Health Organization's annual conference and other international gatherings.

Beijing cut off contacts with Taiwanese government bodies a year ago, and in recent months has also sailed an aircraft carrier strike force aground the island in a display of its growing military power.

Panama's switching of relations leaves Taiwan with just 20 formal diplomatic partners, 12 of which are in Latin America and the Caribbean. The island is also excluded from the United Nations and many other multinational bodies at China's insistence.

Taiwan's Ministry of Foreign Affairs said in a statement that President Varela had ignored the friendship between their countries and the efforts that Taiwan had made to help Panama's overall development. Panama had "submitted to the Beijing authorities for economic benefits" and "lied" to the government of Taiwan.

It also strongly denounced Beijing's "luring" of Panama and said that it would not "engage in competition for money diplomacy with the Beijing authorities."

Beijing and Taipei have long competed with each other to win diplomatic recognition, at times enticing small or poor countries to switch with the promise of millions of dollars for public works projects.

Varela had suggested the possibility of switching diplomatic recognition during his presidential campaign in 2014, for historic, economic and strategic reasons.

"Both nations are betting on a more interconnected world," Varela said in a possible allusion to Chinese economic involvement in the Panama Canal. He mentioned that it was a massive Chinese vessel that was the first to pass through the canal's expanded locks when they opened in June 2016.

China is the second-biggest client of the Panama Canal and the leading provider of merchandise to a free-commerce zone in the Panamanian city of Colon, on the country's Caribbean coast.

TAIWAN, Aug 21: Taiwan lost another ally to Beijing on Tuesday when diplomatic ties with El Salvador were severed, as... Read More...