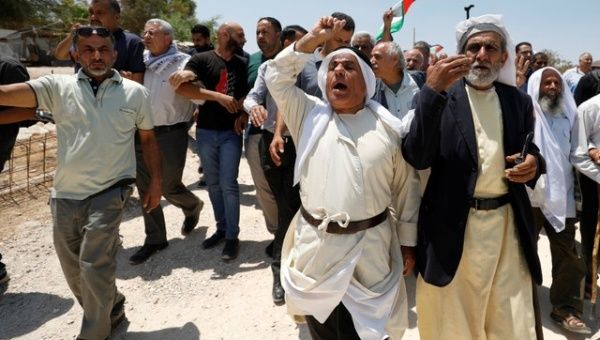 According to local news, dozens of protesters started a march from the village to the settlement road. “ Demonstrators stood on the sidewalk adjacent to the main street and chanted slogans against Israel and its ongoing crimes against Bedouin communities,” Ma’an reported.

A few days later an Israeli Court ordered a temporary freeze on the illegal demolition. The order came after lawyer Alaa Mahajna filed an urgent petition on behalf of the village and its 181 residents. The petition argued that Israel’s Civil Administration, which oversees construction permits in most of the occupied West Bank, refused to review a plan submitted by the town to legalize it.

There has been no news on the court’s final decision.

“For years, Israel has been implementing a policy aimed against Palestinian communities throughout the West Bank, designed to make the residents leave their homes and displace the communities,” the organization said on its website.

Scott Anderson, the director of operations in the West Bank for the United Nations agency for Palestinian refugees, rejected the demolition saying "these pastoral communities are mostly Palestinian refugees, originally displaced from their tribal lands in the Negev. They should not be forced to experience the second displacement against their will."