Palestinian president says no role for US in peace process 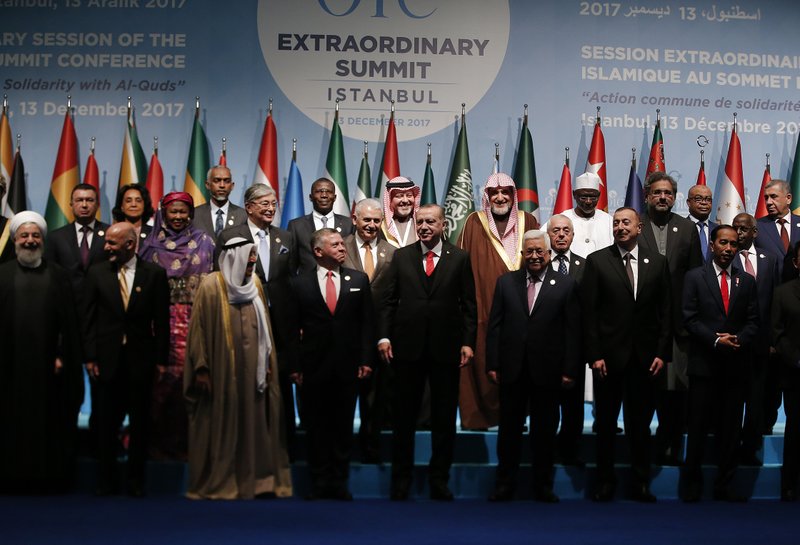 ISTANBUL, Dec 13: The Palestinian president said Wednesday his people will not accept any role for the United States in the Mideast peace process “from now on,” following President Donald Trump’s recognition of Jerusalem as the capital of Israel.

Mahmoud Abbas spoke at a gathering of heads of state and top officials from Islamic nations at a summit in Turkey that is expected to forge a unified Muslim world’s stance against Trump’s move.

Abbas called Trump’s decision a “crime” that threatened world peace. He called on the United Nations to take charge of the peace process and create a new mechanism, arguing that Washington is no longer “fit” for the task.

The Palestinians are committed to a peaceful resolution of the Israeli-Palestinian conflict, Abbas said, but after Trump’s seismic shift on Jerusalem, Washington is not accepted as a fair negotiator.

The speech marked a significant shift in Abbas’ approach toward the United States, after years of focusing on courting U.S. goodwill because of Washington’s role as sole mediator in the Israeli-Palestinian conflict.

Immediately after Trump’s announcement last week, Abbas had said the U.S. effectively disqualified itself as a broker, but Wednesday’s speech was more sharply worded and delivered to a global audience.

Last week, Abbas aides said the Palestinian leader would not meet with Mike Pence during the U.S. vice president’s planned visit to Israel and the West Bank next week. Abbas had initially planned to meet with Pence in the biblical West Bank town of Bethlehem, but two senior aides have said the meeting would not take place because of Trump’s pivot on Jerusalem.

The Istanbul gathering of heads of state and top officials from the 57-member Organization of Islamic Cooperation is also an opportunity for the Muslim world to offer its strongest response yet to Washington’s move.

Turkish President Recep Tayyip Erdogan— the current president of the OIC — called on countries to urgently recognize the Palestinian state and Jerusalem as its capital.

Erdogan has been among the most vocal critics of Trump’s announcement. In remarks to the summit, he said Israel is an “occupying state” and a “terror state.”

Jerusalem’s status is at the core of the decades-long Israeli-Palestinian conflict and Trump’s Dec. 6 announcement was widely perceived as siding with Israel. It also raised fears of more bloodshed as past crises over Jerusalem had triggered violent outbreaks.

“They expect the Islamic nation to remain silent,” he said. “But we will never be silent. This bullying eliminates the possibility of peace and the grounds for shared life. The U.S.′ decision is null for us.”

Most countries around the world have not recognized Israel’s 1967 annexation of east Jerusalem. Under a long-standing international consensus, the fate of the city is to be determined in negotiations.

The secretary general of OIC called on countries that have not recognized Palestine as a state to do so. Yousef bin Ahmad Al-Othaimeen told the summit the U.S. decision on Jerusalem is “an exceptional challenge” facing Muslim nations and that it will fan violence in the region, giving extremists an excuse to sow chaos.

In an emergency meeting in Cairo last weekend, Arab League foreign ministers demanded that the U.S. rescind Trump’s decision. In a resolution long on rhetoric but short on concrete actions, the ministers also called for the U.N. Security Council to adopt a resolution condemning Trump’s decision, but acknowledged that Washington would most likely veto it.

Israel has considered Jerusalem its capital since the state’s establishment in 1948 and sees the city as the ancient capital of the Jewish people. In the 1967 Mideast war, Israel captured the city’s eastern sector and later annexed it in a move that is not recognized internationally.

The Old City, located in east Jerusalem, is home to sites holy to Jews, Christians and Muslims. These include the Western Wall, the holiest site where Jews can pray, and the Al-Aqsa Mosque, Islam’s third holiest site.