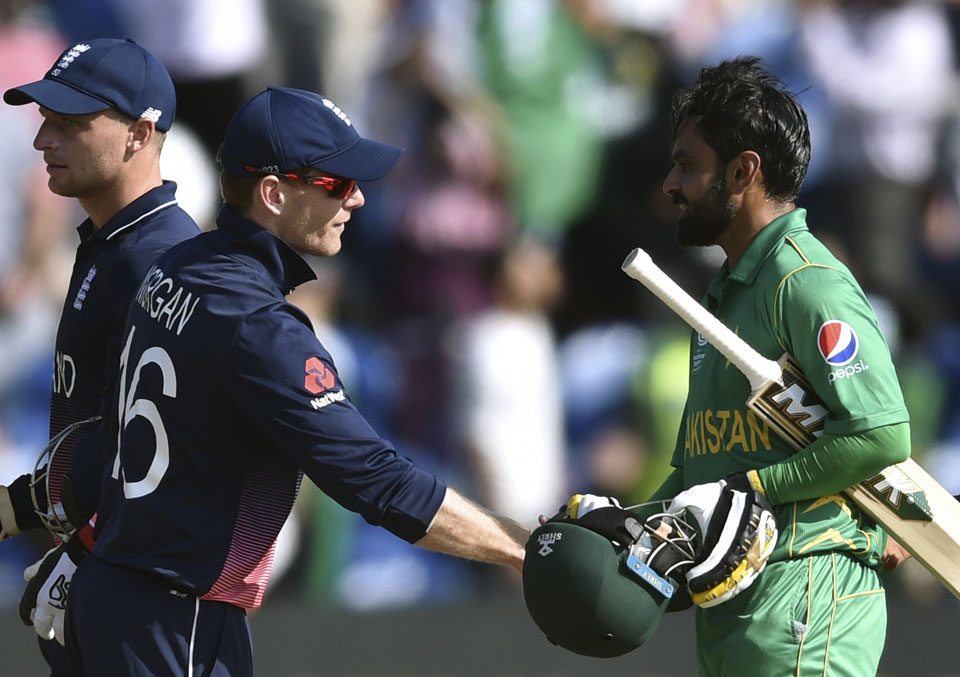 CARDIFF, June 15: Pakistan thrashed England by eight wickets with 12.5 overs to spare at Sophia Gardens on Wednesday to reach the final of the Champions Trophy for the first time.

It was an unexpectedly one-sided semifinal as two-time finalist England continues its quest for a global 50-over title in any tournament.

India plays Bangladesh on Thursday at Edgbaston in the other semifinal match with India the clear favorite — but so was England.

The final is at The Oval on Sunday.

"I don't think there was any home advantage ... We knew that we were going to play on a used wicket at some stage in this tournament, and certainly we found out the other day that today was going to be on a used wicket. And having watched the game against Sri Lanka, we actually didn't think it was that bad.

"But certainly today it was — coming from Edgbaston (against Australia), it was obviously a big jump in pace and bounce and too much of anask for us to adjust to really."

Earlier, Hasan Ali took 3-35 as Pakistan won the toss and bowled out a badly misfiring England.

Joe Root top-scored with 46 off 56 balls before being caught behind off Shadab Khan, but England's innings — for once in this tournament — never really accelerated. The hosts started solidly to reach 118-2 in their first 25 overs and then lost eight wickets for 93 runs in the next 25.

Man-of-the-match Hasan became the tournament's highest wicket-taker with key dismissals of Jonny Bairstow (43 off 57), Eoin Morgan (33 off 53) and Ben Stokes (34 off 64).

Big-hitting Stokes was in a restrained mood, failing to hit a single boundary and scoring 11 singles at the start. Between them, 11 English batsmen in a team known for its mantra of all-out attack, didn't hit a single six compared to five sixes lofted by Pakistan's top four.

Medium-fast Rumman Raees took 2-44 off nine overs on an impressive ODI debut, being called up late to replace Mohammad Amir.

"I think he (Amir) has a little bit of back spasm. Hopefully, he will recover for the finals," Pakistan captain Sarfraz Ahmed said. "Obviously he's our main bowler. He's our best strike bowler."

But Ahmed wasn't taking anything away from his bowlers' performance on Wednesday.

It was just too easy for Pakistan, which won its third straight game at the tournament. Mark Wood (0-37) started the bowling for England with a wide and was then hit for six in the same over by Fakhar Zaman. Azhar Ali smashed Stokes for another six and a four in the 13th over as Pakistan moved to 78-0. The first wicket ended on 118 when Ball (1-37) bowled Azhar, and Zaman was stumped off Adil Rashid ((1-54) but the result was never in doubt.

If Hasan was man of the match, Stokes was likely the most disappointed player in the Welsh capital. He is No. 7 in the ICC all-rounder rankings but had an all-round miserable game. Unable to hit out with the ball at the risk of England not using all its overs — despite constant temptation from Pakistan's well-drilled attack — Stokes did worse with the ball, going for 0-38 in his 3.1 overs.

Mohammad Hafeez (31 not out) hit Stokes for a boundary to seal the win, sharing a 42-run partnership for the third wicket with Babar Azam (38 not out).

England made one change from the team which beat Australia in the group stage, bringing in Bairstow for out-of-form opener Jason Roy. Bairstow opened the batting for the first time, and survived a close-call for leg-before in the first over and two dropped chances afterward.

Three-time semifinalist Pakistan made two changes — bringing in Raees and legspinner Shadab Khan for seamer Fahim Ashraf — from the team which survived a batting collapse to beat Sri Lanka on the same pitch in Cardiff on Monday.

CARDIFF, June 13: When Sarfraz Ahmed came to the crease at Sophia Gardens on Monday, his Pakistan team was four... Read More...

Nepal fails to reach final for the first time