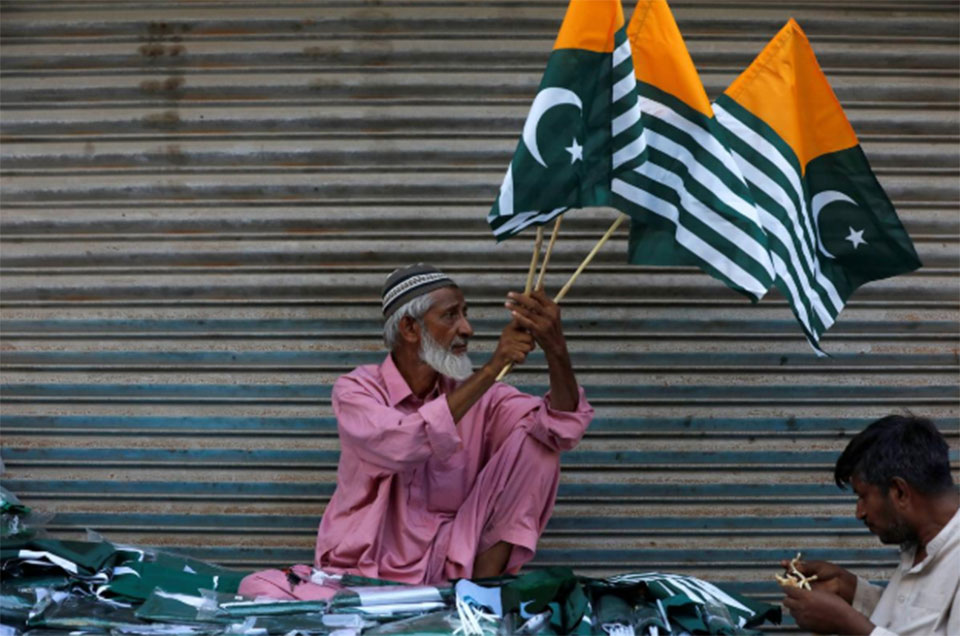 A man sells Kashmir's flags and patriotic memorabilia ahead of Pakistan's Independence Day, along a market in Karachi, Pakistan August 13, 2019. REUTERS/Akhtar Soomro

ISLAMABAD, Aug 14: Pakistan Prime Minister Imran Khan used an address celebrating Independence Day on Wednesday to criticise India for its actions in the disputed Kashmir region that has long been a flashpoint between the two nuclear-armed neighbours.

India revoked the special status of its portion of Himalayan Kashmir, known as Jammu and Kashmir, on Aug. 5 and moved to quell widespread unrest by shutting down communications and clamping down on freedom of movement.

Islamabad retaliated by suspending bilateral trade and all public transport links with India, as well as expelling New Delhi’s ambassador to Islamabad.

“Independence Day is an opportunity for great happiness, but today we are saddened by the plight of our Kashmiri brothers in occupied Jammu and Kashmir who are victims of Indian oppression,” Khan said in a statement.

“I assure my Kashmiri brothers that we stand with them,” he said.

India rules the populous Kashmir Valley and the Hindu-dominated region around Jammu city, while Pakistan controls a wedge of territory in the west known as Azad Kashmir. China holds a thinly populated high-altitude area in the north.

India’s revocation of special status for Jammu and Kashmir blocks the state’s right to frame its own laws and allows non-residents to buy property there.

Indian Prime Minister Narendra Modi’s government has said old laws prohibiting people from outside Kashmir from buying property, settling there and taking up government jobs had hindered its development.

Restrictions were lifted in five districts of Jammu and relaxed in nine Kashmir districts on Monday, India’s home ministry said. It said there would be heightened security for both Pakistan and India’s Independence Day celebrations and for Muslim Friday prayers.

Khan is expected to travel to Muzaffarabad, capital of Azad Kashmir, later on Wednesday to address the state parliament.

India and Pakistan have fought two wars over Kashmir since gaining independence from colonial power Great Britain in 1947, They came close to a third in February after a deadly attack on Indian police by a Pakistan-based militant group resulted in air strikes by both countries.

Pakistan’s government has also said India’s Independence Day, which falls on Aug. 15, will be observed as a “Black Day” this year, with flags on government buildings flown at half mast to protest against India’s decision.

Is anti-sedition law killing journalism in the northeast?
19 hours ago

Lack of vaccination, tests creates room for variants in Nepal
22 hours ago