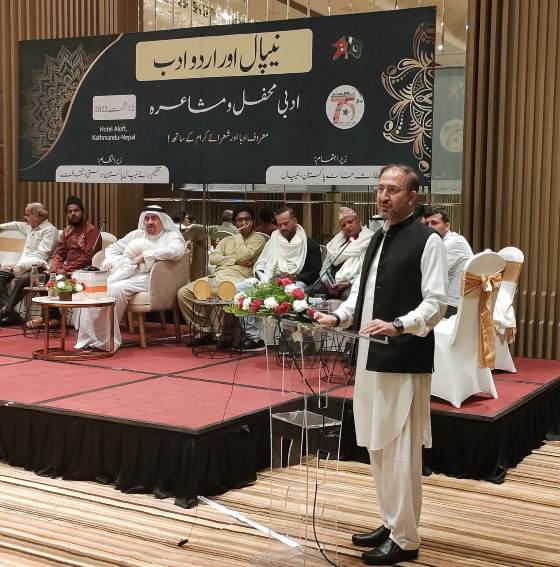 Minister of Education of Science & Technology DevendraPaudel was the Chief Guest on the occasion while Chancellor Nepal Academy Ganga Prasad Uprety attended the event as Special Guest.

The event was attended by people from different strata of society including politicians, serving and retired officials, intellectuals, social activists, journalists, writers as well as analysts. The aim of the event was to highlight literary linkages between Pakistan and Nepal and strengthen friendly relations particularly between both countries.

Chief Guest Paudel appreciated the efforts of Government of Pakistan in education and health sectors and commended Pakistan Embassy for organizing the literary event which brought together Nepali and Urdu speaking poets from both countries.

Special Guest Uprety, distributed the souvenirs to poets/ poetesses and lauded the efforts of Pakistan Embassy for promoting the literature to bring closer both the countries.

Ambassador of Pakistan to Nepal Syed Haider Shah appreciated the laudable contributions of all participating poets and writers. He also highlighted Urdu’s role in bringing together people from across regions and countries. He also underlined the need for further deepening cooperative relationships between the literary bodies of the Nepal and Pakistan.

KATHMANDU, April 13: Nepali food festival was organised in different parts of Pakistan to mark the 60 years of the... Read More...

Rain predicted for two or three more days
7 hours ago

Former PM Oli receives tika from his parents
8 hours ago

Rain predicted for two or three more days
7 hours ago

Former PM Oli receives tika from his parents
8 hours ago