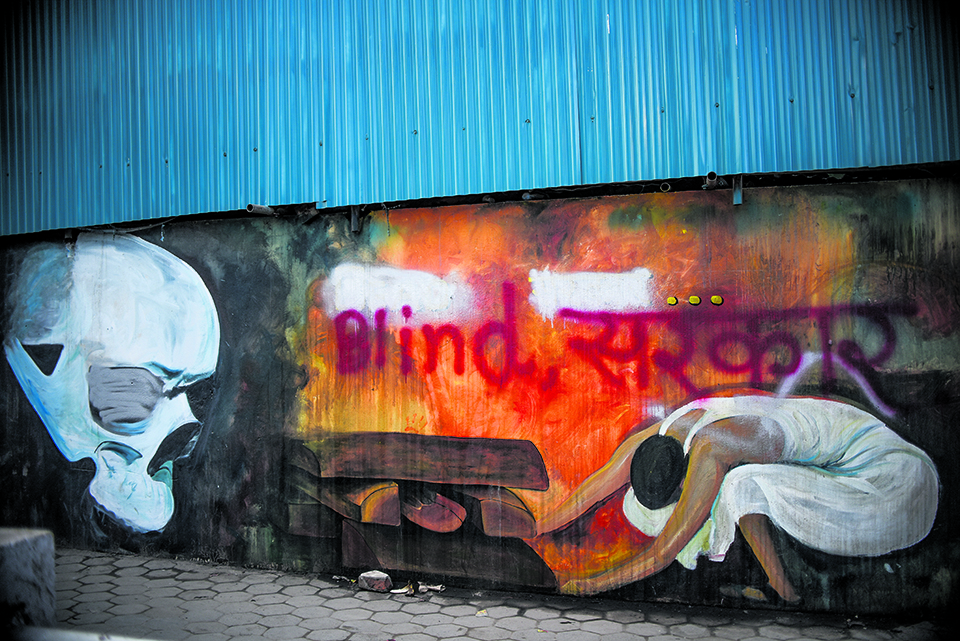 At Ratnapark there is a splotched mural that has been painted over with brusque strokes of white paint and scribbled on forcefully. The smear is an obvious attempt at dismissing an artistic protest. On closer inspection of the mural, however, the bold letters peek out despite the white paint that blurs the two-word text. ‘Dead Sarkar’, it says (Dead Government). Painted by Laxman Shrestha, an artist, and his now disbanded Khoj group, this mural was the group’s attempt at calling out the government’s incompetence and a plea to the public to not remain silent.

“The problem with Nepali people and the government is that they readily compromise and ask for compromises as well. With everything that is going on in the country, it’s surprising to me how normally life goes on. But while the general public remains unstirred, advocates, writers and others are doing their bit in shedding light on all that is going wrong in our country,” says Laxman.

This mural marks the group’s 13th mural of the sworn 101 that they aim to complete by 2022. The Khoj Group previously consisted of sub artists Raju Ghalan Tamang, Puskar Chamling Rai, and Yambang Gaha Hood. Due to managerial issues, this mural is the group’s last under an official name but they plan on continuing their work whenever possible. And making this mural, that Laxman deems to be his career’s best, was one such occasion for them to work together.

While the mural itself took the group six hours to make, it had been thought out months ago. As with any artistic endeavor, researching before painting such bold elements was necessary. So Laxman consulted with a few youths whose opinions, he says, he deeply values. He also enquired into the restlessness felt by the people and examined the motivations behind these feelings.

While drawing at the widely used street, many people inquired about their work. “They showed much enthusiasm so we had an added pressure to do well,” says Laxman. Upon completion, pictures of the mural were shared on social media and were greatly appreciated. But within a week, it was vandalized. The two-word phrase was smeared with paint and automobile chemicals.

Laxman claims to have known that there was no longevity for his mural. “Honestly I’m surprised it lasted six days. There’s always someone or the other who tries to suppress these kinds of expression,” says.

The Hawk
On the right upper corner is the painted image of a hawk with its talons clutching on to a gavel. Hawks are notorious for having sharp eyesight – they miss nothing and observe everything that’s around them with shrewdness and great focus. That is exactly what justice ought to be like – shrewd and calculated, it should miss nothing. The gavel the hawk is holding on to symbolizes the need for fair justice. The hawk is painted on a backdrop made of different colors. This is to refer to the hundreds of thousands of scenarios the common man goes through everyday and to stress that each should be treated with the same sense of fairness.

The Pyre
Set on a red fiery background, the color plays to convey the agitation, angst, and the frustration experienced by the Nepalis in the recent times. Laxman says too much is wasting away, burning away, especially the potential of the youths, who have had to desert their countries in search of better financial opportunities. Their dreams burn away like a corpse on a pyre. The lone man bending over the pyre is in deep mourning, symbolizing how people are currently feeling. The country is mourning over the loss of potential and justice and weeping on the ashes of wasted ability.

The Skull
After all that has transpired, death or an end is inevitable. A skull is the ultimate symbol of the end, just as it is a vessel and a reminder where life once thrived. It works here on the mural similarly, as a reminder of what was and what will no longer be. Here the reference is to the anarchy that is becoming a reality for our country. And it being set against a dark background is to add to the morbidity of the condition.

Dead Sarkar
(The Hawk, the Pyre and the Skull)
The three elements individually represent each stage of happenings but eventually connect to convey a single story: Beginning with the need for an all perceiving-fair judiciary, to the slow death of all hopes of the people and finally the silence of nothingness that is an end to all such hopes. A government that denies its people justice, disregards their hopes and forces them to burn these aspirations is a government that is dead, says Laxman.

The art of self-expression

Being an artist today definitely has its perks. For the longest time, art was limited to painting, sketching, sculpting in... Read More...

Nepali landscape and scenarios on exhibition