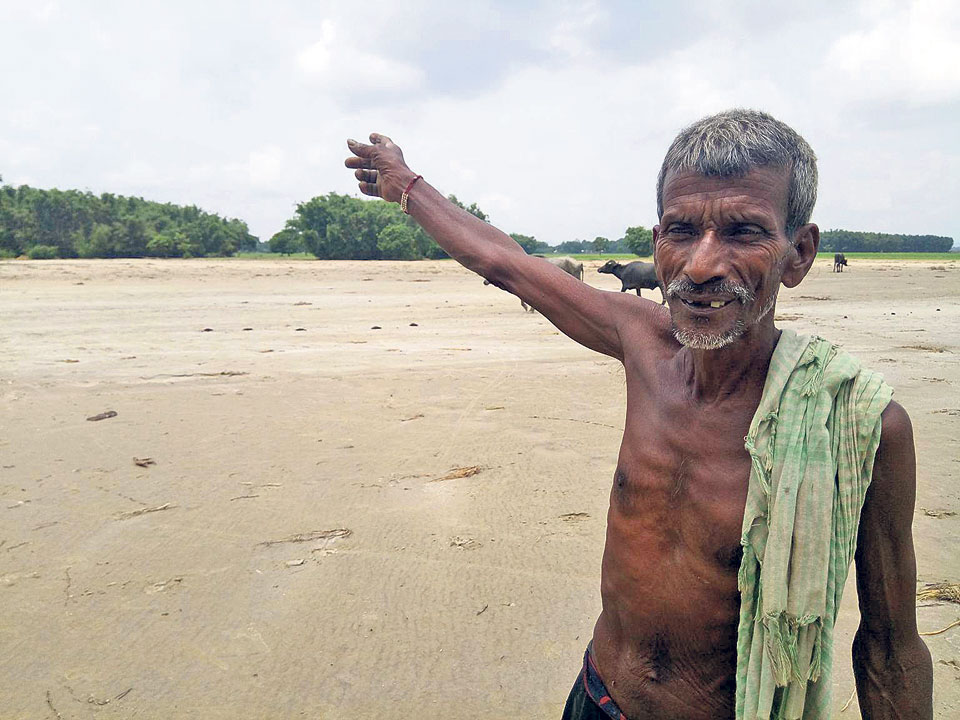 A farmer shows his paddy field covered by sand after the recent floods.

RAJBIRAJ, August 17: Recent floods damaged paddy crop in more than 10,000 hectares in Saptari district, according to a preliminary estimate of the District Agriculture Development Office (DADO).

“We are yet to get exact statistics. But our estimation shows that paddy crop planted in more than 10,000 hectares has been damaged,” Senior Agriculture Development Officer Bhagirath Yadav told Republica.

Sand has covered paddy fields of Chandeshwar Yadav, a farmer. “I had planted paddy in 2.5 hectare by taking loan. But all my investment has gone down the drain,” Chandreshwor said. “Not only me, many farmers like me have lost everything.”

Statistics of DADO shows that paddy cultivation area in Saptari has increased significantly over the past two years. Senior Agriculture Development Officer Yadav said that paddy has been planted in nearly 85 percent of arable land Saptari district this year. “Last year, paddy was planted in around 50 percent of the arable fields,” he added.

Government officials say that such a massive destruction in paddy fields will not only affect livelihood of local people but could also create food crisis.

“Paddy produced in Saptari used to be supplied to other parts of the country,” Arun Kumar Pradhan, president of Saptari Chamber of Commerce and Industry, said. “As paddy crop in other districts has also been damaged, it can cause food insecurity.”

JAJARKOT, Sept 23: Paddy cultivated in 25 ropani of land in ward no. 4 of Kushe rural municipality in the... Read More...

RAJBIRAJ, July 4: A herd of wild elephants that came from the Koshi Tappu Wildlife Reserve wrecked havoc in a... Read More...

16 DIGs including all provincial police chiefs transferred
9 hours ago