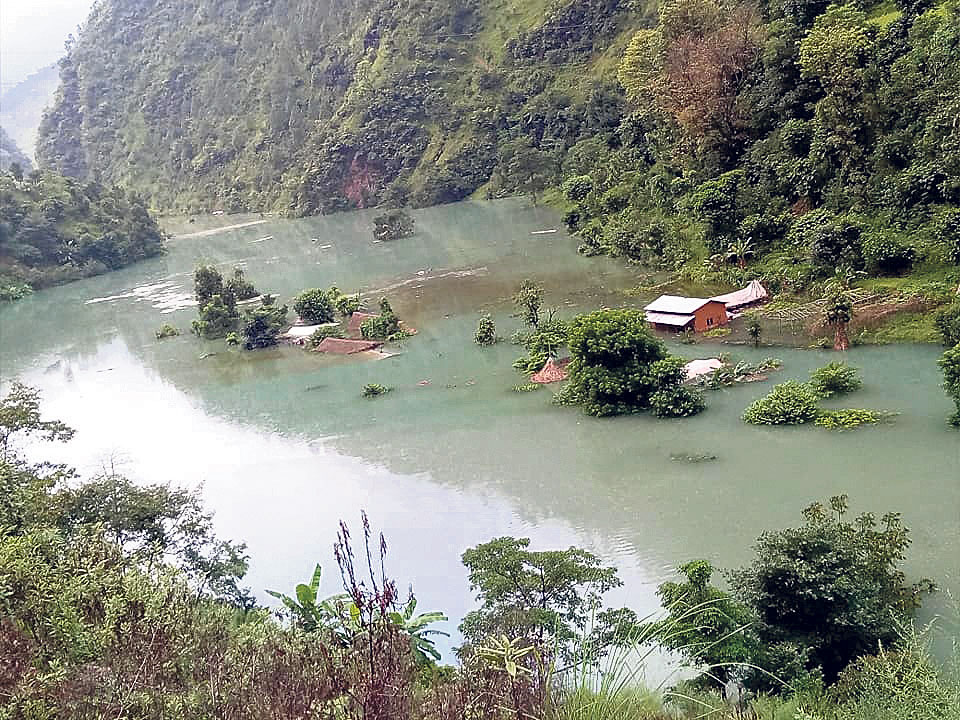 BAGLUNG, Sept 16: Chuda Bahadur Kumal of Dhorpatan Municipality-2 had a sleepless night on Friday. A massive landslide, which struck Turture of Badigad-7, Bhimgithe, forced locals to rush for their lives in the middle of the night. A huge mass of earth which fell from some 500 meters above blocked the Badigad River turning it into a pond.

Due to the blockage, the river started flowing towards their houses and the locals had to rush towards safer areas. Kumal and his family too were able to escape the disaster but his three oxen drowned. "We woke up in the middle of the night after hearing the cries of people," said Kumal, adding, "We took some of our important things and left home but could not save our cattle."

The river blockage has inundated four houses of Dhorpatan Municipality-2, Simalchaur. The Kumal community residing near the river has been displaced following the landslide. The house and shed of Deviram and Krishna Bahadur Kumal and a shed of Ram Bahadur Kumal were buried in the landslide, according to local Dinesh Paudel. The displaced locals are currently sheltering in the house of their relatives.

The local administration and police acted quickly and launched rescue work to avoid any major loss. However, the situation became normal as the blocked river started draining after an overflow. As the monsoon rain had raised the water level in the river, locals were terrified by the blockage. They remained awake for a whole night worrying about their houses and belongings.

Especially, the locals of Kharbang of Baglung and Gulmi were more worried. The landslide which started taking places from 11 pm blocked the river completely by 5 am, forming a two-kilometer long lake. People breathed a sigh of relief after the water started flowing, according to Chief District Officer (CDO) Bed Prasad Kharel. "Now the risk has decreased but people still need to be careful," said CDO Kharel.

As the resumption of vehicular movement along the highway will take some time, the chiefs of Dhorpatan Municipality and Badigad Rural Municipality are planning to open an alternative route for the movement of people. "Currently the road is filled with a huge debris which cannot be cleared anytime soon," said Kharel.

Janak Thapa, chief of the Area Administration Office, Burtibang, said that the water level in the river has receded by only one meter so far.Caption: Badigad River blocked at Badigad-7, Turture, following a massive landslide.

When disaster strikes, Chef Jose Andres is on the ground

After earthquakes, as hurricanes blow and drench, when wildfires chew through neighborhoods and volcanoes spew deadly lava, look for a... Read More...

Panauti hopes to lead through example in disaster preparedness

BANKE (Khajura), July 14: As many as 75 people lost their lives to natural calamities in 15 districts of mid-western... Read More...