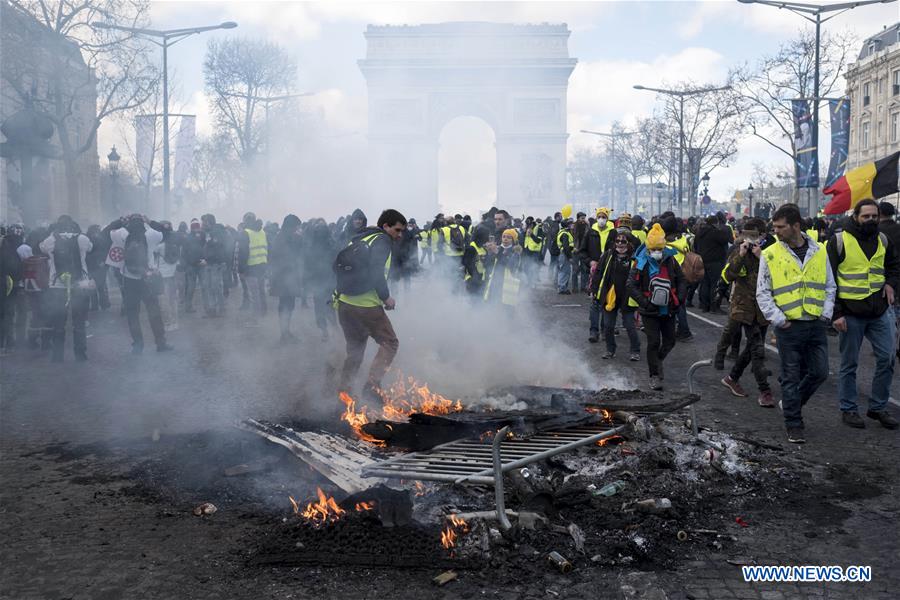 PARIS, March 17: French police arrested more than 200 people on Saturday after violence broke out in Paris in a fresh protest of "Yellow Vest" movement.

Paris department police said 237 people were arrested after groups of masked individuals plunged the capital's landmark avenue of the Champs Elysees into chaos.

Images posted on social media showed individuals wearing black clothing and covering their faces with scarves, hurled stones and other projectiles at security forces who responded with teargas and water cannons.

A branch of Banque Tarneaud was in flames before firefighters arrived. 11 people were wounded in the blaze which forced the evacuation of the building.

Police said 60 individuals, including 17 police officers were wounded in the flare-up of violence.

"That is unacceptable," denounced Prime Minister Edouard Philippe. "We are dealing with several hundred, several thousand in some cases, highly determined people who are there to create disorder," he said.

"I gave very firm instructions that all those who are involved in (these) acts can be brought to court and severely punished," he said.

It was the latest in a series of weekly demonstrations, coordinated by "Yellow Vest," a movement that began in November 2018 against dwindling purchasing power. Then it morphed to a social uprising that forced French head of state to make a major U-turn.

This Saturday's protest which organizers called as an "ultimatum" to French President Emmanuel Macron, drew 32,300 participants, compared with 28,600 numbered last week, but far below the turnout of 287,710 reported as its started.