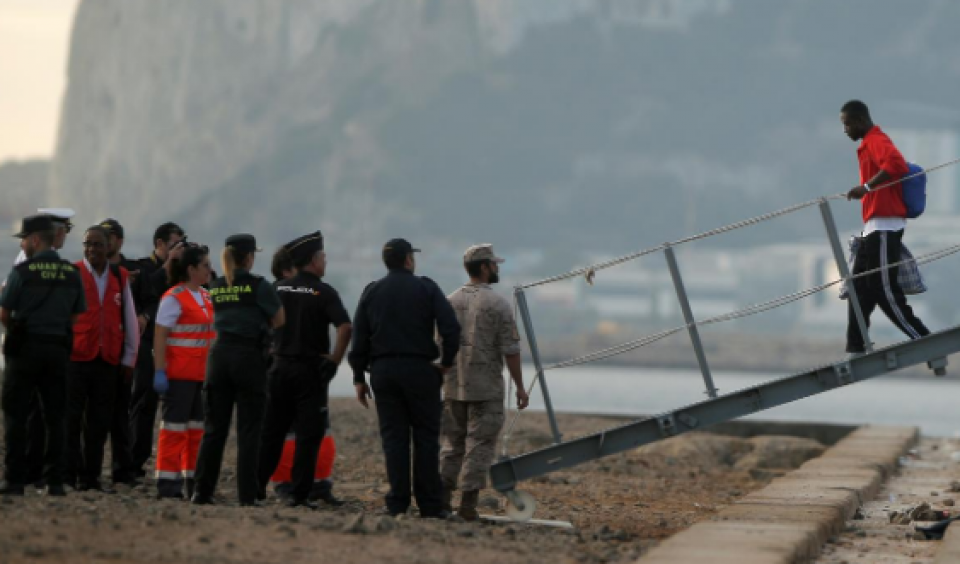 A migrant leaves the Spanish military ship 'Audaz' after arriving from an Italian port, following a prolonged standoff between Italian authorities and Spanish-registered private rescue boat 'Open Arms', at a port in San Roque, near Algeciras, Spain August 30, 2019. REUTERS/Jon Nazca

MADRID, Aug 30:  More than 150 migrants crossed the border fence at Spain’s North African enclave of Ceuta early on Friday and at least six Spanish police officers suffered minor injuries as they tried to stop them, a government spokesman in the city said.

The Spanish enclaves of Ceuta and Melilla on Morocco’s northern coast are a magnet for illegal African migrants trying to reach Europe in search of a better life. The enclaves are surrounded by a 6-metre-high fence topped with razor wire.

“Around 250 migrants tried to jump over the fence and some 155 made it,” the spokesman said. “It has not been as violent as in the past. However, at least six police officers and some migrants were slightly injured.”

The last major breach of the border fence by illegal migrants occurred in August last year when 118 migrant made it onto Spanish soil, though most were later returned to Morocco.

The incident in Ceuta coincided with the arrival in Spain of a Spanish warship carrying 15 migrants who had been stranded at sea following Italy’s refusal to take them in.

Separately, the Spanish coastguard on Wednesday rescued more than 200 migrants from sub-Saharan Africa who had been found on three rafts in the Alboran Sea, between Morocco and Spain.

ROME, Aug 18: Seeking to end a humanitarian crisis, Spain says a Spanish rescue boat with 107 migrants in the... Read More...