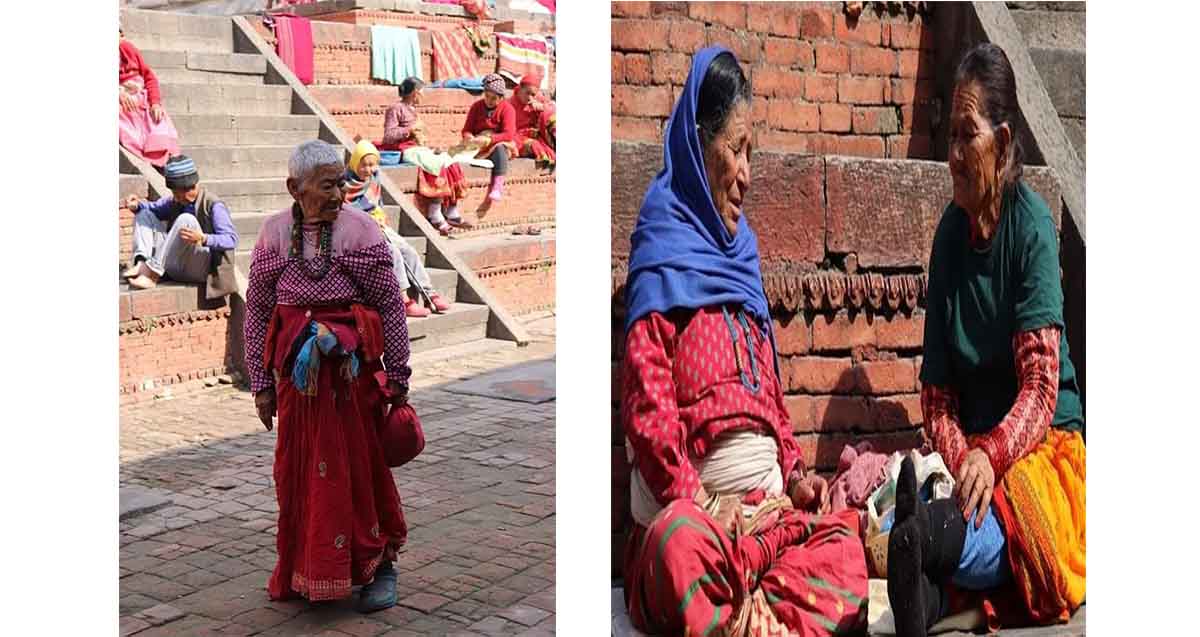 KATHMANDU, July 14: A silver padlock has been hanging at the main door of Pashupati Briddhashram for the last four months. The surrounding area across the holy temple is hushed and quiet, worlds apart from the situation when the pandemic was unheard of. The first thing anyone gazing at the main gate of the Briddhashram would see is the silver padlock that has been hanging on the door since March 14, 11 days before the government imposed a nationwide lockdown on March 24. But the Briddhashram isn’t closed and inside remains 125 elderly. The place has been their home for many years.

“They closed the Briddhashram for outsiders a few days prior to the lockdown, but there are people inside. You can talk to them if you call them from the door,” told Jeetman Tamrakar, a shop owner in front of the Briddhashram gate.

Suddenly an employee asks from inside. “Who is it? We cannot let outsiders in; please call the number written in the notice that’s glued in the gate.” On calling the number, Krishna Kandel, the chief of the old age home picks the phone, giving the same answer, “The outsiders are restricted from getting in.” This has been the scenario around Pashupati briddhashram for over four months now and none knows until when it will continue.

Considering the threat imposed by Covid-19, the door for this briddhashram was closed for outsiders since early March, days before a nationwide lockdown was imposed In Nepal. “The outsiders and visitors have been turned away since the very beginning of the lockdown. We cannot afford to risk the lives of the elderly people that we look after,” said Kandel.

He explained that the organization’s decision to close the old age home for outsiders is still in place as the World Health Organization (WHO) categorized the elderly people at a greater risk of the virus. “Although anyone is at risk of catching the virus, older people and those with pre-existing medical conditions (such as cardiovascular disease, chronic respiratory disease or diabetes) older people face significant risk of developing severe illness,” says WHO.

According to Kandel, a majority of the elderly people inside are sick and have pre-existing medical conditions like asthma, adult onset diabetes, parkinson's disease, arthritis, glaucoma, and letting in outsiders poses a direct risk to the residents. The organization’s immediate goal is clear: To protect the elderly from the slightest possibility of contracting COVID-19. A majority of the people living there are above 60 and they do not have their children or property in their name.

Before the lockdown, devotees would throng to Pashupati Temple, the most admired holy temple in Nepal. A large number of these visitors visiting the temple would also visit the old age home that sits right next to the main temple. But the pandemic changed it all, leaving the surrounding area bare and soundless and with it the world for the 125 golden agers inside the old age home now revolves around the some 26 volunteers working on day and night shifts. “Over the past month the scenario of visitors visiting the ashram has become rare and almost extinct, before the pandemic there used to be many people every day that came to visit the ashram. I wonder how the elderly are living inside,” said Tamrakar, the shopkeeper.

“About 60% of the elderly people have pre-existing health issues. These people have anxiety and fear of illness and death of their own and loved ones,” said Dr. Ramesh Kandel, Nepal's first senior citizen specialist.

According to Dr. Kandel, it is important to insure their physical and emotional well being. He further added that “although the elderly are at the risk of fatal outcomes created by the virus, it is important for the people around them to explain that the virus can be treated and won over”. Providing mental and emotional support does a lot to ensure their wellbeing, he suggests.

Kandel says that the restrictions that are put in place have made the lives of the elderly hard but they are gradually learning to accept the situation and they are learning to live and cope up with the new normal. “Most of them are in need of constant attention and they would enjoy visitors and their relatives coming to meet or pick them up. We would allow the relatives to take them home for a week,” he said, “Missing visitors and outsiders, the elderly would often complain about the new circumstances.” But they have now realized that the pandemic is here to stay, says Kandel.

In the meantime, another old age home in Matatirtha has been functioning similarly. This old age dedicated only for the care of helpless ‘aamas’ (mothers) looks after 19 women brought from various parts of the country. The organization runs from donations collected from the public, and was once open to visitors and people willing to help. The place is now closed to outsiders. “The health and well being of these women have always been our top concern. Considering the threat of the pandemic to the elderly, we have been forced to restrict the visitors,” said Dharma Maharjan, one of the five employees that take care of the elderly women at Matatirtha old age home.

As of July 12, Nepal has reported 16,719 cases of the virus. Of the 38 deaths recorded, over 50% of them are of younger age groups. However, the global records portray that the elderly are most likely to die. “The risk cannot and shouldn’t be ignored,” said Maharjan. Nonetheless, the organization has been accepting aid and a thorough inspection is performed before handing over these aids to the elderly.

Moreover, Dr. Kandel explains that the caregivers looking after the elderly in old age homes should be alert. “The caregivers should often try to engage them in group activities so that they are distracted from all the pessimistic things happening around.”

Dr. Kandel also suggests that media outlets should not exaggerate the figures and should report about the people who have successfully recovered from the virus. “This will help the elderly feel secure and less vulnerable.”

Nevertheless, according to Maharjan,these women are gradually learning to live with the restrictions.They have now started to enjoy within the confined area of the Briddhashram, watching television, making cotton wicks and talking and providing emotional and mental support to each other. “It seems that the pandemic has helped them stand for each other. They are now closer than ever before,” said Maharjan. Kandel echoed similar sentiment, adding that the situation has made the elderly more aware and taught them to practice sanitary habits. Additional water taps have been installed in various spots across both the old age homes and the use of masks and sanitizers have been mandatory.

“The only concern they have now is that they haven’t been able to visit temples for a long time” both Kandel and Maharjan said. “Everything else seems settled and all that we can do for now is to remain hopeful.” 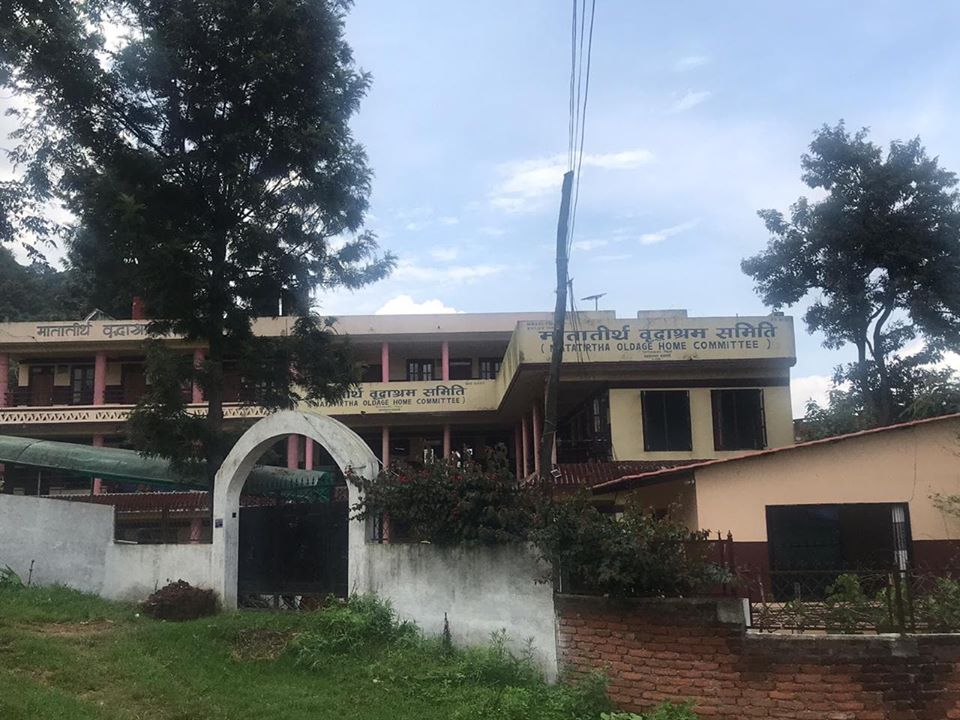 KATHMANDU, April 2: The sixth coronavirus case has been confirmed in Nepal. ... Read More...

Any COVID-19 affected area will be put under lockdown: Govt

KATHMANDU, March 13: The government on Thursday said that it will enforce a lockdown in any area that is found... Read More...