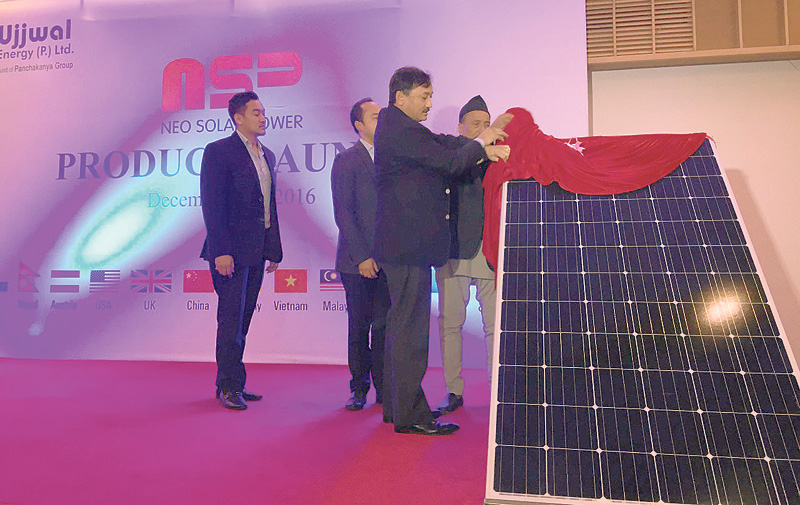 Declining water levels in our snow-fed rivers means that our hydroelectricity potential is slowly being depleted
Dubai, the largest and most populous city in the oil-rich United Arab Emirates (UAE), is rapidly implementing the world’s largest single-site solar park plan. The second phase of the 5,000-MW solar project, which is expected to be completed by 2030, was recently inaugurated by the Vice President and Prime Minister of the UAE, Sheikh Mohammad Bid Rashid Al Moktoum. The landmark clean energy project, named after the prime minister, is indeed a grand initiative of Dubai government to reduce its dependence on petroleum products (mainly natural gas) for its energy. Though Dubai still has big reserves of petroleum products that will last for at least a few decades, its government, nonetheless, made the farsighted decision of supplementing its energy sources, which are currently mainly derived from fossil fuels.

Dubai expects to generate 7 percent of its total power from clean sources by 2020, which will increase to 25 percent by 2030, and to 75 percent by 2050. Altogether, the UAE, which holds about 6 percent of global crude oil reserves, plans to spend 600 billion dirhams (US $20 billion) on renewable energy by the middle of the century. Bahrain, another oil-rich Gulf country, is also seeking alternatives to the existing source of its energy: petroleum products. Bahrain wants to find alternative sources as a back up for a time when its oil-fired economy gets into trouble, with possible decline in oil incomes.

Not only the UAE and Bahrain, other members of the Gulf Cooperation Council (GCC)—like Kuwait, Oman, Qatar and Saudi Arabia—have in total committed US $100 billion for renewable energy projects over the next 20 years.

Separately, prompted by rapid decline in water levels in its rivers, the East African country of Kenya has switched to thermal electricity to compensate for the declining generation from hydro projects. Kenya has been exploring alternative energy, and looking to diversify its energy sources in order to reduce dependence on hydroelectricity. This was important because Kenya has in recent times seen sustained droughts. Its key hydro plants like the Seven Forks, Sondu-Miriu, Masinga and Turkwel have not been able to operate optimally, with the fall in the water levels of the supplying rivers. As a result, the contribution of hydroelectricity in Kenya’s national power supply has dropped to 27 percent from 39 percent a couple of years ago.

Bahrain, Dubai and Kenya are among many other countries that have new strategies to cope with possible fuel crisis in the future.

Let’s look at Nepal. We are nowhere. We are wasting our rich natural resources, especially water resources, as almost all major hydropower projects have been delayed.

We need to learn from Kenya which, after the fall in water levels in its rivers, has looked to reduce its reliance on hydroelectricity. Water resources are not to be taken for granted in these times of global warming. We have commercially viable hydropower capacity of 44,000 MW. However, we have been able to harness just around 2 percent of that potential. Any Nepali citizen would feel uncomfortable sharing this with foreign friends: that we as a country have been able to produce just around 800 MW in our 105 years of history of hydroelectricity generation.

We know that we in Nepal are also witnessing falling water levels in our snow-fed rivers. If we spend most of our time disputing and debating the value and viability of the big hydro projects, before long, we might have nothing to debate about. Every single day we are losing our precious water resources. We are mistaken to think that this natural resource will be there forever. Declining water levels triggered by less snowfall in the Himalayas already offer ominous signs.

We must also start working on a plan to harness electricity from alternative sources. We have strategic plans for electricity generation for next one or two decades but we don’t have strategic vision to replace or supplement hydropower. We need to explore alternatives such as solar, wind or other sources that can meet our energy need even after five or six decades. An extensive research into alternative energy is the need of the hour.

Nepali policymakers have also been arguing that Nepal holds tremendous potential to export hydropower to India and China, as well as to other neighbors. But we should not forget that our potential markets are gradually shifting to solar power to meet the increasing energy demands. We can take India as an example. The government of Narendar Modi has planned to install 175 GW of renewal energy by 2022—three times the present capacity.

India recently approved a plan to establish 40 GW of solar energy at its 50 solar parks. In fact, both of our neighbors are developing extensive solar power plants, with crashing cost of solar. Moreover, the price of hydro-electricity has significantly gone down in India. As it is, we will not be able to sell Nepali electricity in neighboring markets, where alternative energy sources are cheaper and more easily available.

Keeping in view the changing market dynamics and the fact that we won’t be able to harness water resources indefinitely, we need to act immediately to fully utilize our hydro potential. Meanwhile, it is also about time that we seriously explored other alternative sources of energy.

To generate investment and fully realize her energy potential, Nepal must step outside its borders and set up shop in India Read More...

We have focused our energy on economic development, Dahal tells visiting Chinese team