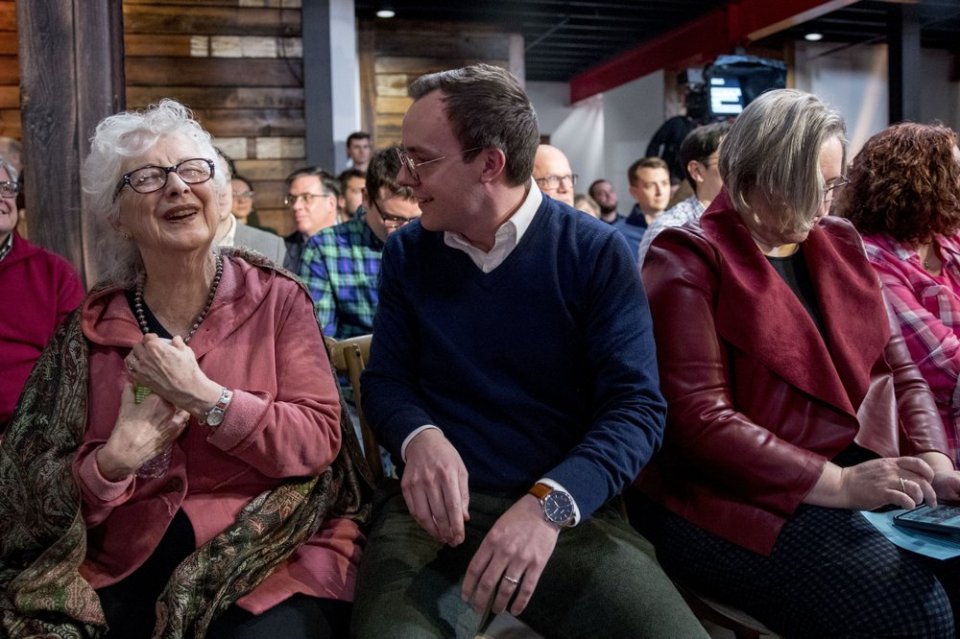 ANKENY, IOWA, Jan 27: At nearly nine p.m. on Saturday, Samy Amkieh was about to head back to his office after braving 20 degree temperatures to knock on doors for three hours in East Des Moines. But the 20-year-old field organizer knocked on one more door and was rewarded by convincing the resident to be a team leader for Bernie Sanders at a nearby caucus location.

“When you think you can’t go any more — that house is too far away, it looks really icy down the street — just remember that every single person you’ve talked to, the odds are they haven’t been pulled in by us or by anyone,” he told a crowd of nearly 100 Sanders volunteers Sunday, aiming to rally them to head out into the cold yet again to knock doors for the Vermont senator.

One week before the Iowa caucuses, Amkieh is one of hundreds of campaign staffers and volunteers fanning out across the state doing the behind-the-scenes work that can lead a candidate to victory. A White House hopeful’s ground game is always important, but perhaps never more so than this year when Sanders and three other leading contenders are feverishly working to break free from a clustered top tier in Iowa.

Adding to the urgency is the Senate’s impeachment trial of President Donald Trump, which will remove several candidates from the trail this week, forcing them to rely more than ever on a passionate group of staffers and volunteers to carry them through to the Feb. 3 caucuses.

Paul Tewes, who was Barack Obama’s 2008 Iowa state director, said at this point in the campaign, the organization is “everything.”

For Sen. Elizabeth Warren of Massachusetts, a sophisticated organization could counter signals from some polls that her late-summer strength in Iowa has waned. She reportedly has 150 staffers on the ground and has been organizing since last spring, with staffers hosting weekly coffee shop get-togethers and movie nights across Iowa to get voters engaged with her campaign. An endorsement this weekend from the state’s largest newspaper, The Des Moines Register, could also provide a boost.

Others have spent much of the past month training their most committed volunteers on how to win over skeptics in the room on caucus night.

Pete Buttigieg’s campaign says over 5,000 of its supporters from all of Iowa’s 99 counties have attended one of their caucus trainings. During one such event in Ottumwa, Travis Brock, Buttigieg’s national caucus director and a veteran operative in Iowa and Nevada, walked the volunteers through everything from math to how to approach undecided participants.

“The first thing to say is, ‘I hear you,’” Brock told his students, several of whom are first-time caucus participants. “Because when we begin an interaction with someone, we want to indicate that we actually understand what they’re saying.

In addition to traditional door-knocking and phone-banking, the Sanders campaign is signing up supporters outside pharmacies and other stores, at trailer parks and nursing homes. Misty Rebik, Sanders’ Iowa state director, said that one of the campaign’s organizers was recently kicked out of six nursing homes in a week, “but she came back with lots of ‘commit to caucus’ cards!”

That effort, and looking for voters in unorthodox areas, is part of their strategy to try to drive up turnout in the caucuses by getting new caucus-goers involved.

“We’ve just been as aggressively focused on as much face-to-face contact as we can have,” she said. “Especially when you’re trying to meet low-propensity voters and newer voters, they’ve gotta have that human connection to get more committed.”

Sen. Amy Klobuchar, who’s hoping to harness a late surge in interest in her campaign, recently held organizing events in every one of Iowa’s 99 caucuses in a single day, and has sent surrogates to visit “satellite” caucus sites, the locations set up at nursing homes and other locations meant to make the caucuses more accessible.

Some campaigns are doing more unorthodox events. A volunteer for businessman Andrew Yang held a Chinese New Year’s party for supporters of the businessman in the small northern Iowa town of Northwood on Saturday night. Jane Podgorniak, the Democratic chair in the county, said she believes his volunteers are even helping him win over Republicans.

“They’re smart and everybody loves ’em,” she said. “I even have a friend who’s a strong Trump supporter tell me the other day she wants to caucus for Andrew Yang because she liked his volunteers so much.”

But it’s not just door-knocking that makes the difference for campaigns in the final days — it’s what they do with the troves of data volunteers collect while knocking doors.

Most campaigns use a mobile or web app that allows volunteers to enter data from the voters they encounter while canvassing or working the phones — details like who that voter supports, whether they can be persuaded and if they have a ride to their caucus, among other things.

That all gets fed into a central database that campaigns use in the final weeks to help target supporters. Matt Paul, who was Hillary Clinton’s Iowa state director in 2016, said that, combined with the typical daily tracking polls the campaigns do in the final weeks before the caucuses, inform their strategy.

“You’re looking at that data every night making decisions that impact the operation the next day you’re making decisions on digital buys, specific message targeting, where to send surrogates based on the data you’re getting. So it’s critically important, especially in a race this close,” he said.

Caucus-goers can also use apps and send texts during the caucuses themselves, Paul noted, so campaigns can use that technology to help their precinct captains figure out the complicated math to get their candidate to viability or gain additional delegates. And the data collected in the weeks leading up to the caucuses can help campaigns make sure they’re getting each and every committed caucusgoer to their precinct location, by organizing shuttles to the caucuses and following up with supporters who they haven’t seen check in.

But there are signs that other campaigns may be struggling to organize. Though the Biden campaign says it has one of the biggest staff footprints in the state with 28 offices and more than 145 paid staffers in Iowa, some local party officials said his operation was lacking.

Winneshiek County Chair Nathan Thompson compared Biden’s organization to that of the party’s losing 2018 gubernatorial candidate, who was criticized for ignoring rural parts of the state.

“Nothing I’ve seen from his campaign indicates to me that he’s going to run any more of an effective campaign than (losing 2018 gubernatorial candidate) Fred Hubbell or Hillary Clinton did,” he said.

But Tewes argued that on caucus night, in many cases, it’s about quality over quantity.

He pointed out that the caucuses are essentially “nearly 1,700 different campaigns going on over a three-hour period, and that’s where organizing is going to be essential.”

If a campaign is not organized in 80 to 90 percent of those precincts “that’s problematic,” he said.

‘You called me a liar,’ Warren told Sanders post-Iowa debate

WASHINGTON, Jan 16: Elizabeth Warren accused Bernie Sanders of calling her a liar before a national television audience during a... Read More...

DES MOINES, IOWA, Jan 15: Elizabeth Warren made a forceful case for a female president and stood behind her accusation suggesting... Read More...

7 contractors including Pappu Construction in govt blacklist
15 hours ago

I resigned on moral grounds: Gokul Baskota
6 hours ago