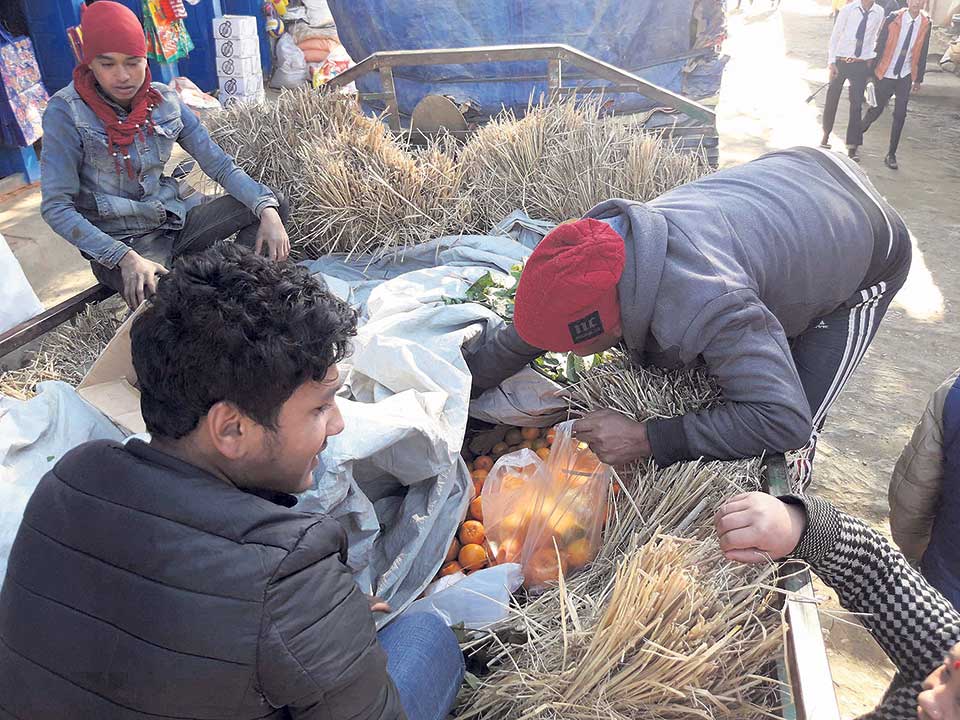 KHOTANG, Jan 7: Khotang has seen a 20 percent fall in orange production. While the previous fiscal year saw production of 8,250 tons of orange, it fell to 7,380 tons this year, according to District Agricultural Development Office (DADO), Khotang.

“The land area with orange cultivation has decreased. Besides that, hail and windstorm during crucial stage of production has caused production to fall this year,” said DADO chief Kaushal Kumar Yadav.

Although there has been a hike in the price of oranges, the yield has not been sufficient to keep up with the demand in the market, according to Yadav.

Due to the fall in production, roadside markets of Diktel, Khotang Bazar, Halesi, and Chisapani  have seen a shortage of oranges where orange sells for at least Rs 5 per piece and around Rs 100 per kilogram.

Despite the fall in production, farmers of Yamkha, Temma, and Chisapani claimed that their produce was being exported to the Tarai region through contractors.

Oranges produced in the district make their way into Tarai markets as far as Itahari, Dharan, and Biratnagar. Construction of a concrete bridge across the Dudhkoshi River at Jayaram and the temporary bridge at Phoksingtar across the Sunkoshi River has made it easier for transportation of oranges to Tarai via Beltar of Udayapur.

A total of 26 wards in Khotang have professionally adopted orange cultivation due to its prospect of providing a stable source of income. As a result, the number of farmers cultivating orange had increased in recent years.

The farmers have said that government assistance would help them achieve the full potential of orange farming.

“If we could get assistance in packaging, grading, processing, and transporting the finished products, strides could be made in orange cultivation,” said Ram Bahadur Kunwar, a local farmer.

DHANGADI, May 15: Wheat production in the far-western region of the country has increased year-on-year by 11.6 percent. ... Read More...

Maize production down 40 percent in Sarlahi

SARLAHI, April 29: Maize farmers of the district are in a big problem as the hybrid maize seeds did not give... Read More...

“Mr Prime Minister, how would you feel if you didn’t get a kidney ahead of transplantation?” (with video)
3 hours ago

Where to contact if someone needs Remdesivir?
12 hours ago

What we saw at Teku Hospital (photo feature)
3 hours ago