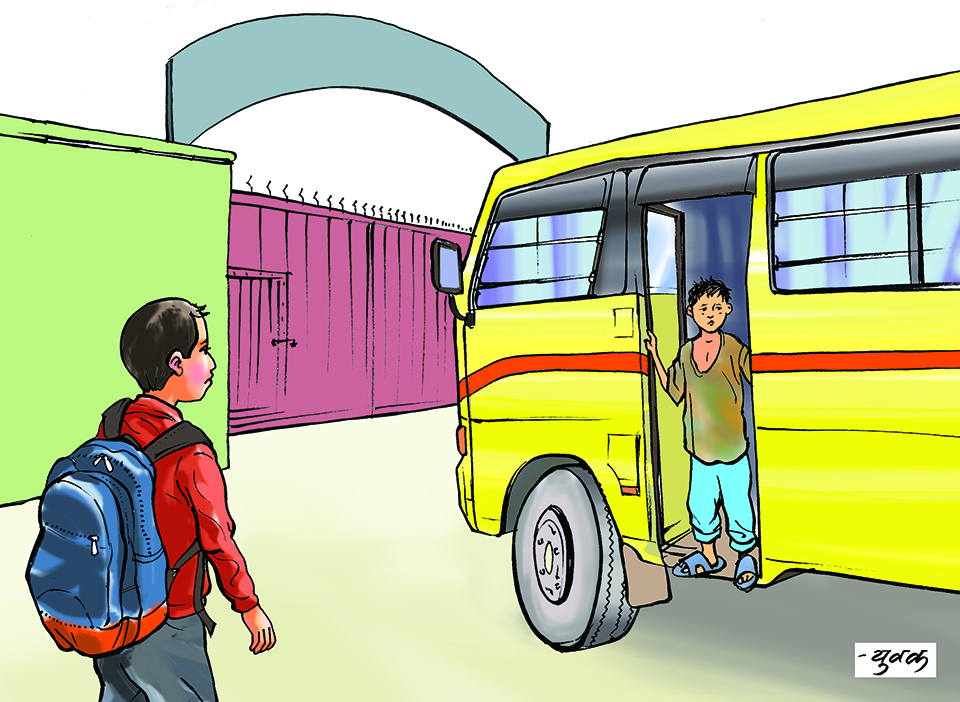 If you sit down with a book or newspaper, your child then will start having an urge to sit down to read or do school assignments.

I am writing this to you based on experience I have gained through teaching career. I have seen a wide spectrum of parents and children. Thus, I’d like to think that I am almost in a position to theorize that children are “mirror image” of their parents. After all, there goes a saying “the apple never falls far from the tree.”

School is a place where a child learns various life skills. But it is very unlikely that your child learns sanskaar (ethos) at school. Home is the place for that. Many people mix sanskaar with etiquette. The former is deep-seated while the latter works at superficial level. The time you spend with your children ultimately helps shape their attitude towards almost everything in life. Many parents tend to think that merely getting into a school with the noted reputation for academics will guarantee the better future of their children. Most of them fall for the trap of defining “better future” through the yardstick of material success. Equating wealth with happiness can be dangerous.

You can bring up your children by inculcating the kind of attitudes you want bit by bit. That, in turn, helps you in maintaining self-discipline in your day-to-day life as well. For instance, if you want your kids to sit down for study instead of wasting away hours sitting around the house or indulging them in modern luxuries and gadgets, then you at first need to create reading ambience at home.

If you sit down with a book or newspaper, your child might just ignore it first, but it will ultimately beckon her. Your child then will start having an urge to sit down to read or do her school assignments. Keeping up with the lessons at school will no longer be a boring task for her.

During interactions, many parents express concern over children’s general aversion from books and they squarely chalk it up to school’s inability to rouse appetite for learning. I don’t think the school is solely responsible for that.

Ask yourself a simple but million dollar question: Do you allocate some time every day out of your staggering 24 hours for your child? As long as the answer is “no”, you have failed to carry out a very important responsibility of a parent. When we rear a child, three key aspects should be addressed. The first is physical growth of the child, which you as today’s parents have been getting full mark for. The second is sanskaar, or ethos. I have not found an English word that would exactly do the justice to this word. The third is the development of children’s consciousness. With the word “spiritual” many of us today almost inevitably make the mental imagery of the rituals of worshipping gods and visiting temples. So we end up scoffing at the thought of someone being “spiritual”. If your child strives to live up to the spirit of a Sanskrit phrase basudhaiva kutumakam (the world is one family) your child is working well on her spiritual growth.

How long is it possible for you to keep reminding your child to greet your elders in front of them? Your children will learn it by seeing you do this with your elders and betters and this learning will later become one of defining features of sanskaars.

Misplaced love for your child might be an instant fix to some day-to-day problems in your child’s life, but this in turn is contributing to your child’s stunted holistic growth. It reminds me of a beautiful parable. A boy out of compassion helps a pupa of an insect, which was struggling to come out of its cocoon, by cutting its cocoon. But the boy’s so-called compassion deprived the insect of share of its struggle, which caused the stunted growth of its limbs and wings.

Thus it couldn’t fend for itself and fell prey to its predator easily. You keep your child away from responsibilities as a result of your unfounded fear of hurting your child.

I was taking a private home tutorial for an eighth grader a few years ago. I struggled to give the boy the mental imagery of (secondary) roots. The irony of the matter was that there was a large (large enough for Kathmandu denizens) garden at his home with many kinds of blossoming flowers and growing vegetable plants. It had never crossed his mind that he could gain hands-on experience of plants in his own garden. Later I discovered that parents used to hire someone to take care of the garden and the boy never got a chance to develop a liking for gardening, plants, nature and things thereof. Don’t you think you are missing something very important along the way?

Many parents go to their child’s school to complain about “bad company”. If you raise your child telling him not to keep such-and-such people’s company, this only helps breed contempt in your child’s mind for others. So long as you do not instill a sense of gratitude—to his life, to parents, to friends, to teachers and to Mother Nature—in your child’s mind, he will never be at peace with himself.

You are the driving force behind your child’s development and personality as an adult. No one else is to blame for this.

The author is a teacher at Rosebud School, Kathmandu

A LETTER TO MY DAUGHTER

I feel so lucky and blessed to have you, in my life. My world changed since the day you came... Read More...

Schools give no discounts on books to parents

KATHMANDU, April 21: While parents who purchase text books for their children from bookstores receive up to 15 percent discount on... Read More...

The letter that marked Maoist-UML divorce

Nepse inches up 3.33 points after falling continuously for four days
42 minutes ago