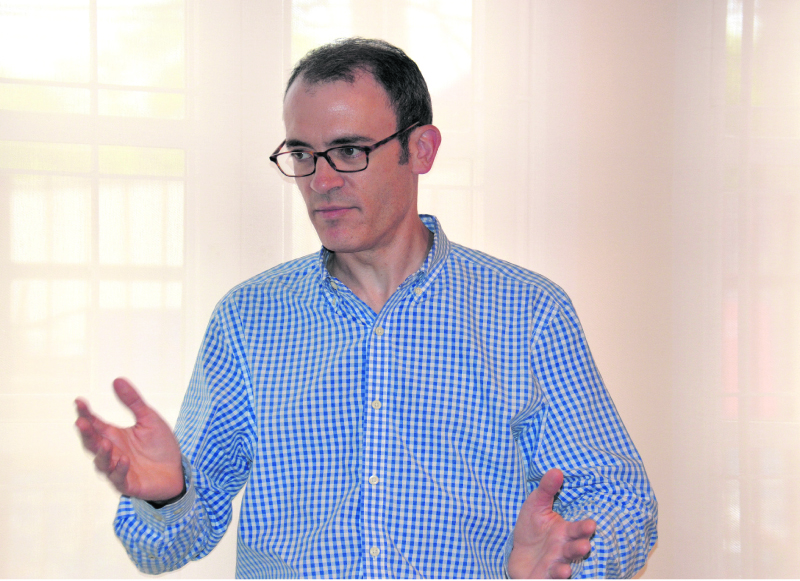 Nathaniel Heller is the executive vice president of integrated strategies at Results for Development (R4D), which works with change agents such as government officials, sometime social entrepreneurs and civil society activists to design and execute strategies for strengthening health, education and nutrition system. Prior to joining R4D in 2015, Heller co-founded and led Global Integrity, a non-profit organization that promotes government transparency and accountability worldwide. During his time as executive director of Global Integrity, Heller led the organization since its inception in 2005 through a period of intensive growth that saw Global Integrity established as a global leader on anti-corruption and governance issues. Republica's Kosh Raj Koirala caught up with him during his recent trip to Kathmandu in order to learn the efforts of his organization to promote transparency and accountability. Excerpts:

What brings you to Nepal this time?
The visit was organized by the Kathmandu-based US embassy, which, I think, is trying to start conversation around governance, transparency, accountability. There are a couple of other reasons that were useful and interesting to me. One is, I am in the global steering committee of the club of countries in the open government partnership. We really want Nepal to join it. So, it's been a good trip to meet and try to convince government officials in several places to encourage Nepal to join. Thirdly, I have a personal connection that has been very fun to play out this week. There is a community in Nepal, a physical space called opengov hub, which is a community of organizations and activists working in the field of transparency and accountability issues. And, that was a space and community that I built in Washington five years ago. Some of the groups there also work in Nepal with Nepalese partners.

Can you briefly introduce the concept of open government?
It is a kind of new concept that came into the scene some ten years ago. I think the best definition is that the government should do three things. One is to be very transparent in the way it works. Second is that the government should be participatory and citizens should have active role in the way the government decision gets made and in the way services get delivered. Thirdly, there should be accountability and those making decision in the public sectors need to be accountable. So, this is an elegant concept that has three basic pillars.

What triggered you to start this project? Why does it matter to Nepal?
I definitely do not take ownership of this concept alone. There are thousands of thinkers, reformers in government as well as activists in civil society, who figured out this concept over the years through experimentation. So, I do not claim this to be my concept.

I think there are a couple of powerful and important reasons. I do not think governments in the coming five, ten, twenty or thirty years will be able to remain closed at least with rare exceptions. Open government is just where people expect their government to be transparent, increasingly expect participation in the government's works and they certainly expect accountability. So, it is coming whether the government wants it or not.

So the question is only whether they get on the bandwagon or not. Secondly, I think equally importantly is that an open government is better government, it is cheaper government, and it is more efficient government. We have mounting evidences that really suggest this case. These are the reasons I think why many governments have already embraced this concept. There is so much knowledge, energy and insight outside of the walls of the government ministries, and harnessing those talents and ideas from non-state actors including private actors and from civil society as well as youths is really smart and cost-effective ways for better governance. And, there are really powerful stories building in the last five years showing open government is better, cheaper and faster than the traditional government. This is an instrumental approach. This is a better value proposition than the traditional government.

How does it work actually?
It is just a bumper sticker. It's not a magical thing like I can give one example. It depends on the problem we want to resolve. Let's take a hypothetical example that a mother goes to a local primary health center to get her kid immunized, but there is no drug in the shelf.

So to deal with that there might be complaint hub set up and there is a commitment from the central government office to deal with it properly. When, let say, 14 people make similar complaints, the problem gets addressed soon. This will help the government to respond to the problem more aggressively. This is a fictitious example. But this is how the concept of open government works.

Did you held meeting with the government officials? What do they say about the government not joining the open government partnership network?
There is a lot of explanations and they are valid too. There is so much political transition and change. It is just hard sometime to get those commitments. I can understand that.  I do not think there is a logical or physical resistance. It's never been a huge priority for the previous governments.  This week we made really good efforts to make the case why it helps Nepal. Some countries even have serious financial challenges. Ultimately, the decision lies with the government. We have seen members of parliament, we've seen chief secretary of cabinet, we've seen chief information commissioner. We told them they can do a lot of peer learning from other countries and adapt them to the local context. I tried my best to encourage the government to join.

How do you assess the practice of open government in Nepal?
I think it is exciting and it is on the rise. It is not quite as matured as we have seen in a few other countries. But it is definitely a lot better as compared to many other countries.

There is a nucleus of reformers and a few inside the government like Chief Information Commissioner Krishna Hari Banskota and Chief Secretary Som Lal Subedi I think, really believes in these stuffs. But there is also a good nucleus outside the government such as Accountability Lab. Kathmandu Living Lab on the tech side is really well-known outside of Nepal. It does a lot of good stuffs. There are some building blocks. I am hopeful that they will pick momentum in the future.

The countries that trust the government most and least

Trust in government serves as a vital driving force for a country’s economic development, increases the effectiveness of governmental decisions,... Read More...