Only porters are arrested in gold seizures on Tibet-Gorkha route 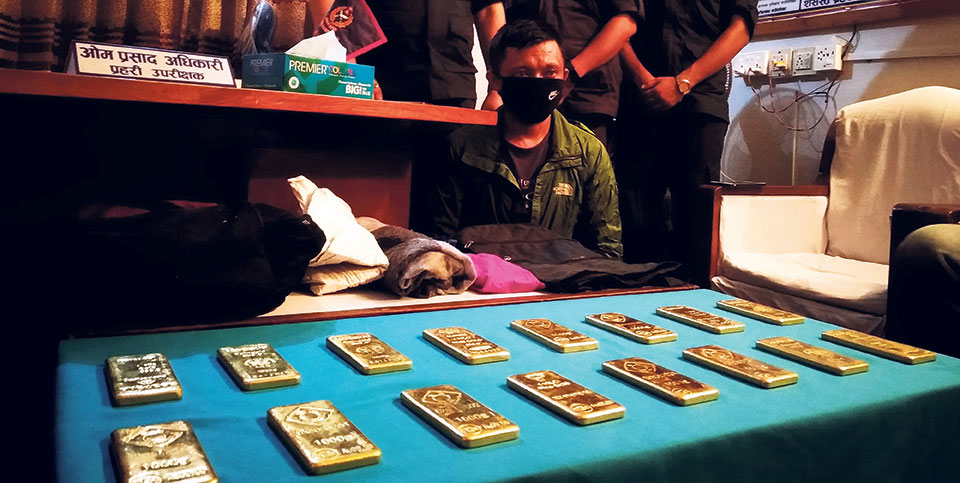 Police in Gorkha make public Dhankamal Gurung with 16 kg gold seized from him, on Thursday.

GORKHA, July 27: Police in Gorkha seized 26 kilograms of gold during the past one year. The gold was secretly brought to Nepal from Tibet through the Dungla checkpoint at Chhekampar of Chumnubri Rural Municipality in Gorkha district.

Tibetan smugglers had handed over the gold to some porters of northern Gorkha. Those sending the contraband and receiving them aren’t identified. In both of the two incidents last year, only the porters who transported the gold were arrested and punished.

After that, Lama told the police that they did so at the request of a Tibetan man. The two said they did not know the Tibetans who handed them the gold. They also didn’t know about those who were to receive the consignment in Kathmandu.

The Tibetans had told them to transport the gold to Kathmandu and hand it over to someone who would call them on the phone. They didn’t need any interpreter to talk to the Tibetans because most people in northern Gorkha can communicate in Tibetan. Police have concluded that those carrying 10 kilograms of gold were mere porters. But even 11 months since the seizure, police do not know who sent the gold and who was to receive it in Kathmandu.

Thursday’s 16 kg gold seizure case is no different.  Police arrested one Dhankamal Gurung of Dharche Yarubagar with the gold. Forty-year-old Gurung is a mule herder in northern Gorkha. He had gone to Tibet to transport foodstuffs. Some individuals approached him and asked to transport the gold up to Arubari in the district and he agreed. Gurung said he has no information about the senders and the receivers. Police arrested him before he could hand the gold over to the ‘unidentified’ receivers.

Preliminary investigation by police found that Gurung was just an ordinary porter. “We still don’t know about the senders and the receivers,” said Superintendent of Police Om Prasad Adhikari of District Police Office Gorkha. “Only porters are arrested in most of the smuggling cases.” He said northern Gorkha has developed as a new gold smuggling route.

When gold is seized, the police hand over the gold and the porters to the Department of Revenue Investigation (DRI) and are not involved in the investigation beyond that point. So police do not bother searching for the smugglers.

“The smugglers are taking advantage of the naive villagers, who do not know what is legal and what is illegal,” said former lawmaker of Gorkha-3 Chham Bahadur Gurung.

“They are lured by monetary offers and get arrested.”

He said the government should increase vigilance on the border by deploying more security personnel to control smuggling. “Also, the rural municipality and ward representatives should take serious initiatives to stop such illegal activities,” he added.

LAHAN, Jan 13: An armed police force team has arrested six persons along with 1.757 kgs of gold from Ghurmi... Read More...

Veg prices escalate in Bhaktapur amid lockdown
20 hours ago

Monkeys in Pashuptinath scramble for food (with photos)
17 hours ago