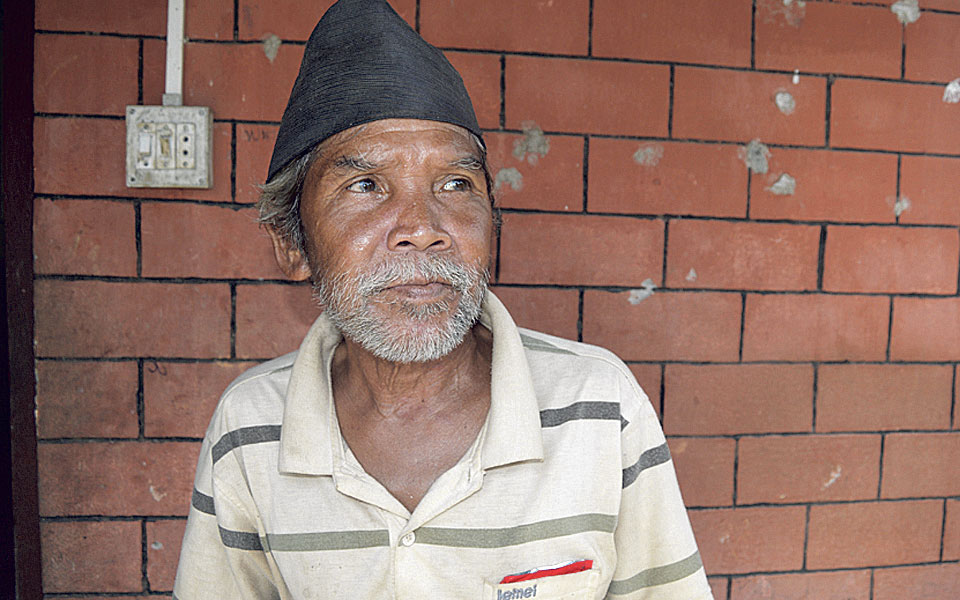 TANAHUN, April 19: Tributes started pouring on social media on Wednesday over the sudden death of Rajamama Kusunda, the only person able to speak his tribal language.

The elderly man of Byas-10, of Tanahun died on Wednesday morning at the age of 70. Some termed his demise as the death of living history.

He had reportedly gone to toilet at around 4 am in the morning. Unfortunately, that became the last walk of his life. As he didn't return for a while, his wife Indramaya Kusunda went out to look for him and found him lying in the front yard of the house.
"We carried him to the bed with the help of neighbors and offered him tea but he left us after a few minutes," Indramaya said with tears rolling down her cheeks.

After hearing about his death, political parties, journalists, social activists and common people expressed their condolences on social media.

Member of parliament elected from constituency 1 of Tanahun, Krishna Kumar Shrestha, also arrived at Rajamama's home for his last rites. Shrestha along with the chairperson of the district coordination council of Nepal Federation of Indigenous Nationalities (NEFIN), Tanahun, Basundhara Gharti, among others carried the body of Rajamama to the cremation site.

According to Kalika Poudel of Byas-10, Dihigaun, Rajamama had never expressed any ill feelings against anyone in his entire life. "He was a person with a good heart," said Poudel. Not just Tanahun but the entire nation should mourn his demise because it is an irreparable loss to the country.

He breathed his last at around 5 am in the morning. Hari Singh Gurung, former chief of NEFIN and current chairperson of Tanahun Tourism Development Committee stated that Rajamama's death is a big loss to the country.

"He was the only person in his community who could speak his tribal language. So, it's a great loss," said Gurung. The last rites of Rajamama were performed by his daughter Simant in Damauli. His name has been used as a reference in a book published for Kusunda language, informed Hari Singh Gurung, former chairperson of NEFIN.

"His contribution in the conservation and continuation of Kusunda culture and language was immense," said Gurung. Rajamama is survived by his wife and a daughter.

Earlier, he and his family used to live in a forest but later they were offered one ropani of land and a house in Byas-11, Dihigaun by National Foundation for Development of Indigenous Nationalities (NFDIN).