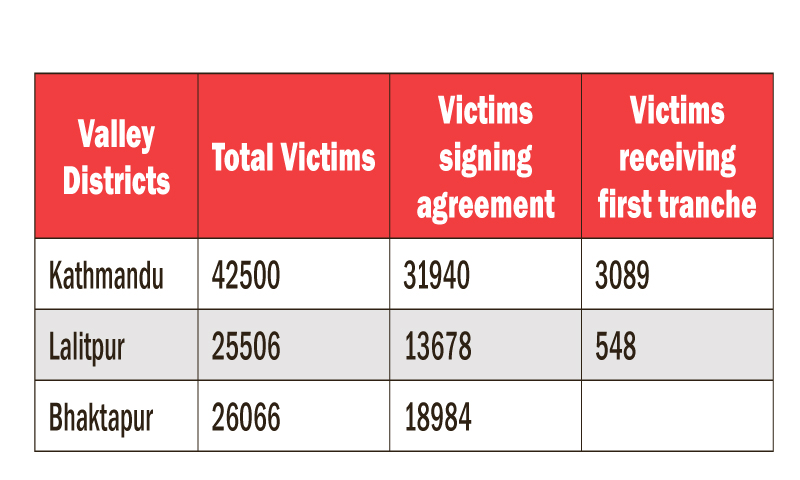 -Not a single victim in Bhaktapur gets the first tranche
-29, 470 yet to sign grant agreement
KATHMANDU, Dec 19: The National Reconstruction Authority (NRA) has utterly failed to expedite the task of grant distribution to the earthquake victims in the Kathmandu Valley whose houses were completely damaged by the last year devastating earthquake.

Even after over a month and a half since the start of the grant distribution process, the NRA has distributed Rs 50,000, the first tranche of the housing grant, only to 3,637 of the total 94,072 eligible victims in the three districts of the Kathmandu Valley--Kathmandu, Lalitpur and Bhaktapur.

Much to the dismay of the quake victims, not a single victim eligible for the grant amount in Bhaktapur district has received the first tranche as of now even though 18,984 victims of the total 26,066 victims in the districts have already signed grant agreement with the local authorities.

Narayan Shrestha, deputy director of Central Level Project Implementation Unit of the Ministry of Federal Affairs and Local Development which oversees grant distribution on the behalf of NRA, said that the delay on the part of European Union to release funds has impeded the grant distribution work in Bhaktapur.

He said that the funds will hopefully be released within a few days.

He said that the delay in releasing the first tranche to the victims in Kathmandu and Lalitpur was also due to mistakes in the names of the victims. “Similarly, locals in many places in Lalitpur and Kathmandu have obstructed the grant distribution process demanding that other genuine victims who have been  also be included in the eligible list” he added.

He said that the delay in opening bank accounts of the eligible victims has also slowed down the grant distribution task.

Quake victims in Valley to get first tranche before Tihar: Ministry

KATHMANDU, Oct 20: The Ministry of Federal Affairs and Local Development has said that all the earthquake victims in Kathmandu Valley... Read More...

KATHMANDU, Feb 10: About 53 percent of total eligible earthquake victims in the Kathmandu Valley have received the Rs 50,000 first... Read More...

KATHMANDU, Aug 15:  The government on Monday decided to provide the first tranche of Rs 50,000 as relief grant to the quake victims by... Read More...