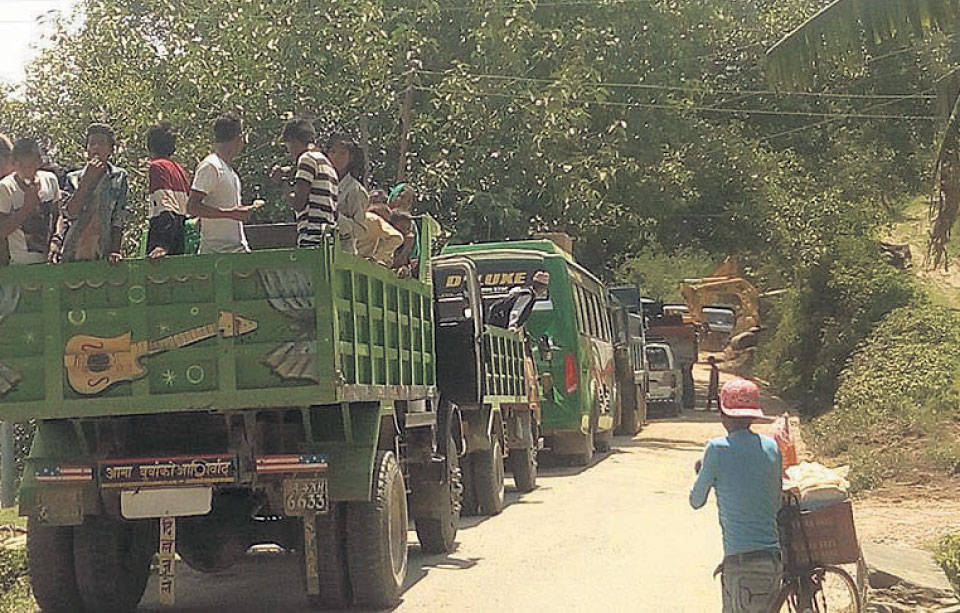 NUWAKOT, Dec 5: Only ten percent of the Galchi-Rasuwagadhi road has been completed even after a year of the commencement of the work.

The transportation in the route will be blocked for eight hours daily in order to complete the construction work within the given time of 21 months.

Speaking at an event organized by District Administration Office (DAO) of Nuwakot, the stakeholders showed commitment on working to complete the construction work within the timeframe given by the government.

“There are no possibilities of completing the work within the given time if we do not increase the pace,” said Subodh Kumar Devkota, project coordinator for the road. “To increase the pace of construction, the road will be closed for vehicles from 6am to 9am and again from 11am to 4pm starting from December 16.”

“Other roads connecting Nuwakot to other districts, Trishuli-Kakani-Balaju and Gangate-Chahare-Tokha, will be used as alternative roads when the Trishuli-Galchi road will be partially blocked for construction,” added Devkota.

“There will be some difficulties to people of Nuwakot when the road will be blocked for construction, but it is the responsibility of everyone to cooperate with us in this case,” said Shantaman Tamang, head of District Coordination Committee. “We are focusing on fulfilling our commitments to project management and contractors.”

“The roadway is a project of national pride and is also going to be established as an international trading highway, so the project management should focus on completing the roadway within the time given by the government,” said Birendra Kumar Yadav, Chief District Officer (CDO) of Nuwakot.

The 82-kilometer-long roadway starting from Galchi of Dhading via Devighat-Trishuli-Mailung-Syafrubesi-Rasuwagadhi to the gateway to China, Kerung, is going to be two-lane for most of its portions. But, the portion of the road between Galchhi of Dhading and Dhunge of Nuwakot is going to be four-lane. Eleven meter width of the two-lane road is going to be blacktopped.

Cabinet meeting on December 3, 2015, in the proposal of Ministry of Physical Infrastructures and Transportation, had decided on developing the road as an alternative highway connecting China and Nepal, and accordingly allocated budget and made a contract with the TCC.

Plantation completed in only 3% of rice fields in Rautahat

RAUTAHAT, July 1: Plantation has been carried out in only three percent of paddy fields in Rautahat district by June. ... Read More...

KATHMANDU, May 9: Only eight percent of the total number of candidates fielded for the positions of chiefs of local units... Read More...