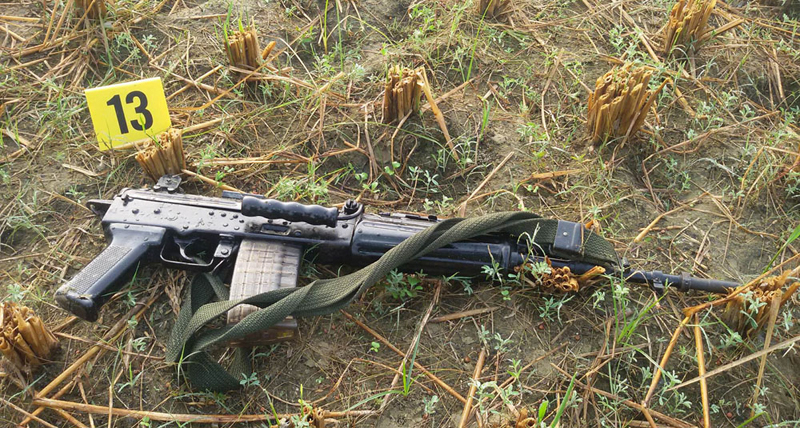 RAUTAHAT, Nov 14: A man was killed when police and an unidentified gang exchanged fire at Lalbakaiya River, Rautahat on early Monday. A gang of unidentified persons opened fire at the police team deployed from Central Regional Police Office.

The law enforcement agency then resorted to a counter fire. A gang member, who was injured in the incident, died while receiving treatment.

His identification is yet to be ascertained. Police Constable Surendra Chaudhary has been injured in the firing by the armed gang. Chaudhary has received bullet injuries in his one leg and is undergoing treatment at District Hospital, Gaur.

Police Inspector Birendra Paswan at District Police Office told Republica Online that police have confiscated weapons and some documents left by the gang.

According to Paswan, the seized arms include an Insas rifle, an Italian pistol and a homemade pistol. Police added that they are facing difficulties to investigate the case as identification of the deceased has not been established yet.

Police Inspector Keshav Regmi at Area Police Office, Garuda, said that a high alert has been declared for all the border checkpoints in the district.

BUTWAL, Feb 22: Wanted criminal Manoj Pun, who gained notoriety through his involvement in multiple high-profile murders and extortions, has been... Read More...

JAKARTA, Indonesia, Oct 26:  Indonesian police say as many as 23 people were killed and more than 40 others have been... Read More...