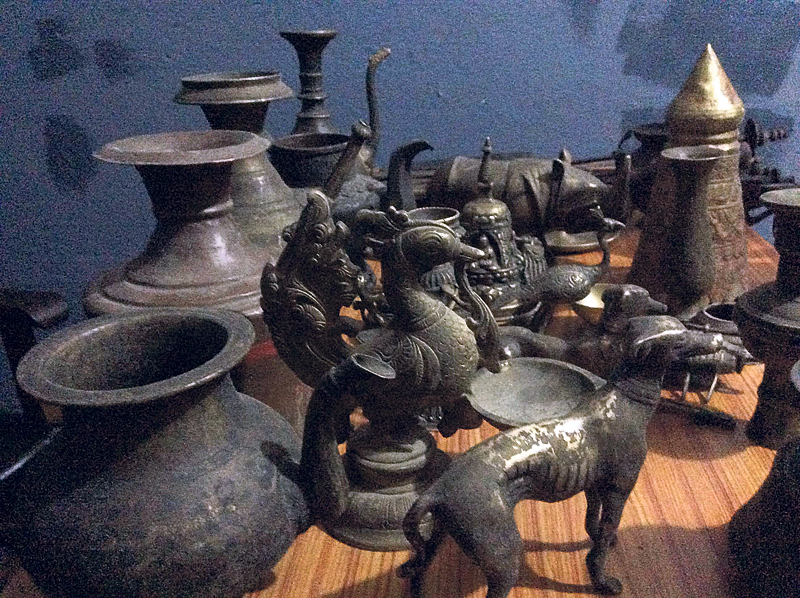 A haul of antique seized by police from a 19-year-old boy from Asan, Kathmandu.

KATHMANDU, Aug 9: Nepal Police has arrested a member of a gang of six to seven youths allegedly involved in stealing artifacts and antique idols from quake devastated buildings, temples and other structures.

The police apprehended 19-year-old Prakash Raut, originally from Sindhupalchowk district, after he was found hauling away a heavy sack on his shoulder around midnight Sunday from Asan-27 of Kathmandu.

“When we inspected his sack we found antique idols along with the other items,” said DSP Binod Ghimire, chief of Metropolitan Police Circle Office, Janasewa.

The idols seem very old and of immense archeological importance, he said, adding that most of the items are ones used for Hindu prayers.

Most of the seized idols contain hand-carved designs.

“Though the boy has denied his involvement in stealing the idols, he has admitted that others in the gang target old houses and structures left unattended after the earthquake,” DSP Ghimire said adding.

During the interrogation, Raut, who lives in a rented room near Shiva-Parvati temple in Basantapur, that he was involved only in transferring the items.

The police has claimed that the gang of six to seven people was involved in stealing idols from homes and temples and selling them for handsome prizes.

“We have tracked all the suspects but yet to arrest them,” said Inspector Raj Maharjan of the office. The police also said that they were preparing to hand over the seized idols to the Archaeological Department for further examination and send the alleged to police custody for further interrogation.

KATHMANDU, Dec 27: With the seizure of a conch shell in Kathmandu last week, Nepal Police has found a new lead... Read More...