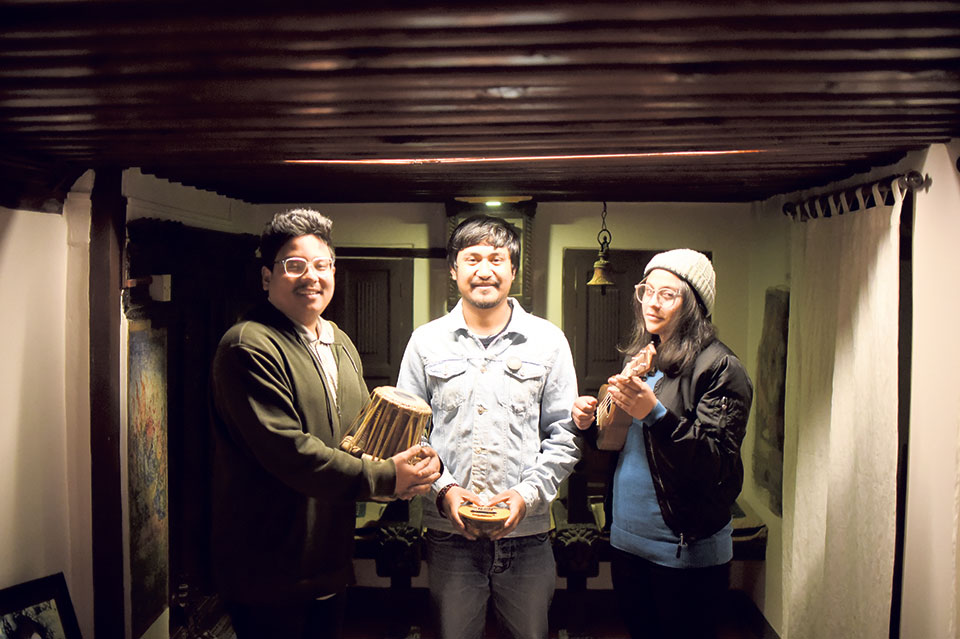 Baaja will soon be releasing an album and they have already started recording for it. Until then, you can hear them on SoundCloud under ‘Baaja.music’ and ‘Chattra Bahadur Chahari’ or find them on social media like Facebook and Instagram.

Musicians are often envied for the lives they seem to lead. All the fame, glamour and the very act of creating music and songs for a living make a compelling case for it too. But to make good music is never an easy task. The profession itself being unconventional, it’s hard to come up with something original and unique.

But occasionally we come across musicians or groups of musicians who bring something new to the table, maybe not in a revolutionary scale but in their own distinctive remarkable way. One such band is Baaja, an up-and-coming group of talented musicians consisting of three members: Kishan Shrestha, 24, Ashesh Rai, 24, and the newest addition to the already eccentric band – Adhishree Dhungana (Addy) who is 21 years old.

The band was formed at St. Xavier’s College, Maitighar, in 2012 with three members but with Parbat Limbu in the place of Dhungana. Limbu, currently not an actively participating member of the band, still contributes creatively. Rai was already a professional musician when the band started out. He played the tabla in Rohit John Chettri’s song ‘Bistarai Bistarai’. Rai, who had already done full-blown interviews, the excerpts of which was hung on the boards of the college, created quite the hype in their college. “I remember the entire college including myself being in hysterics about it all,” says Shrestha. Soon after, the trio came together deciding to make their own music, in a more personal and unorthodox way that has given their songs an unfiltered, unique touch as they had all the creative license to explore and experiment.

As all three members hailed from the eastern part of Nepal their initial music and songwriting were heavily influenced by the Eastern dialect and tunes. This is evident from their tracks like ‘Koiliko Bhakai Ramailo’ and ‘Fulbutte Chari’. “The way people speak there is in itself so tuneful and that’s what we were inspired from,” says Shrestha.

Talking about the name of the band, Shrestha recalls how Rai would come to college with the most peculiar instruments in his bag, ranging from the Italian Mandolin to the African Mbira i.e. different ‘baajas’ and considering how Rai himself used to beatbox, his friends playfully mocked him by calling him a baaja as well. Eventually, when they decided to form a band, the word ‘baaja’ seemed relevant as well as reminiscent of their friendship.

Addy and Shrestha stress on the fact the reason their synergism works is mainly because of their deep-rooted friendship as well as respect for each other’s creations and contributions. “We are friends before musicians. First we sit and hang out and after a while the music comes out quite organically,” says Addy. “Even if we sat down to talk, at the end of the day we would be playing a tune or two and singing and that just feels right,” she adds. For them, the creation process comes naturally. There are no strict practice schedules or a compulsion to contribute to each and every project.

However, the band doesn’t sit idle either. They are in the process of recording their songs with seven or eight lined up ready to come into fruition. They have performed at theaters (individually as well as a band) and most recently at an EP launch of another band ‘The Phosphenes’ at 25 Hours in Kathmandu and the audience seemed quite excited to hear them live. Their music has evolved since their beginnings from folk but now, starting afresh, they don’t want to be limited to any particular genre. “Most musicians don’t want to do the same thing over and over again, and we’re no exception,” says Shrestha. “We have definitely evolved in just four years and people will notice it once they listen to our new tracks and compare it with the old ones,” he adds.

Like their name suggests, they use different baajas, both traditional and contemporary, in their songs. But this isn’t deliberate, says Shrestha. “If we see a new instrument, we are fascinated by it and when we come up with a tune, we add it to a song,” he explains. To them, music is a way of expression, a way of life. “We hear rhythms in the most mundane things. It could be an alarm, a busy crowd, or just construction noises. That’s what happens when you are so personally involved with music,” says Addy.

The band members say that they are still discovering themselves. They want to learn more about different instruments and the history of music. “There is so much unexplored. We want to create something unconventional and bring something entirely new to the table,” says Shrestha.

Baaja will soon be releasing an album and they have already started recording for it. Until then, you can hear them on SoundCloud under ‘Baaja.music’ and ‘Chattra Bahadur Chahari’ or find them on social media like Facebook and Instagram. With melodious tunes, remarkable compositions, and sublime lyrics, Baaja is a band worthy of Nepali people’s love and appreciation.

Taylor Swift’s latest song has a new target: homophobes. Coinciding with the announcement of her seventh album, “Lover,” the pop... Read More...

Why We should All be Feminists
57 minutes ago