On refugees, with empathy 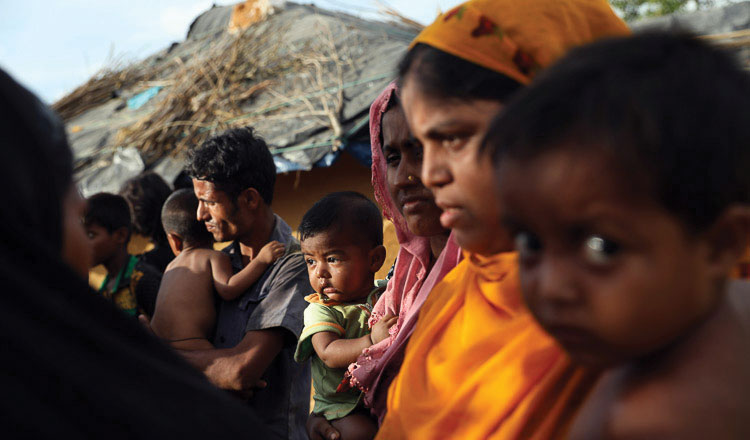 If Nepal is concerned about Nepali speaking Burmese in Burma, it should support Rohingya refugees and speak against Burmese atrocities

They are running directionless, with decimated wailing children tucked into their bosoms, dangling by their malnourished bodies, in the hopes of finding a sky that does not spit fire. The fighter planes with icons of “democracies,” and sometimes marked with their own national flag, are zooming in and descending through the dust of clouds created by projectiles and artilleries. They are walking thin lines of sometimes civilians and sometimes terrorists. It all depends on who is in charge of defining their fate. Perceiving humans as targets is rampant. This is not a fictional account. Syrians have been living this nightmare for years now. Five and half million have already left their country in search of safety. Their cities collapsed right in front of their eyes, their civilizations shattered and plummeted on the ground, devouring the wails of their fear-stricken children. They have seen the burning rubbles swallowing their family members alive. They know that the only line dividing terrorists and civilians is sometimes the ability to whisper. And they are aware that those who fail to whisper, or be identified by the wailing living relatives, could be counted as terrorists, further legitimizing the war on terror.

This is not just the story of Syria. Iraq, Afghanistan, Libya, Yemen, almost the entire Middle East has seen this naked reality again and again. Few lucky ones who escape this onslaught find new identity under the tents of UNHCR. This is how Refugee—human being largely stripped off humanity—is born. But, the word also attempts to secure the perishing humanity of 22.5 million people on earth. It is a word that separates them from the larger group of roughly six billion people, who have “acceptable” forms of national documents and a safer bluish sky over their heads. Internally displaced and asylum seekers combined, the number of people uprooted from their homes, because of war or political persecution, is above 66 million.

Most of these people go to bed hungry or half fed. Refugees of all ages—young, old and infant—are suffering from malnutrition. Poorly funded UNHCR is their lifeline, and it is struggling to preserve their humanity.

Where is empathy?
Refugees are generally humanized in two instances. When the cutest, the quietest, and the meekest little toddlers get washed up to the shores after succumbing to the hungry oceans, or when the muscular refugee youths turn into Supermen, swinging from balcony to balcony, risking their lives, to save a citizen child of a powerful country. Those who might have more responsibility for rescuing the dangling child, clap from the safety of their assured humanity, granted by their citizenship, without undergoing any test or scrutiny. The in-betweens—elderly, women, and disabled—are not seen as human beings because they can’t do any of that.

When the Malian refugee was being dubbed “the knight in shining armor”, the temporary sheds of other refugees were being removed right in EU. Just last week, Italy had a spat with Malta over letting a rescue ship dock which had more than 11 refugee children and seven pregnant women on board.  Thanks to Spain for stepping in to save these vulnerable people. The western countries often use the word migrant to mean refugee, to distance and justify heartless actions like these. They saved their children from the fire spitting skies, resulting from the intervention of developed democracies, but that might not even register them as “legitimate” refugee now. In order to reclaim their humanity, they must do something extraordinary pushing the saturated market of empathy for refugee strength or sorrow even further.

The drying empathy for refugee and asylum seekers is contagious. The nationalistic fever gripping Europe and the United States is the result of that. Trump administration’s policy of reaping off children from their parents has no other explanation. Not letting a rescue ship dock carrying refugee minors and pregnant women is equally inhuman. I suppose, it requires a different face to bring out empathy that is in short supply. Save the Children had to cast a thirteen year old British girl as a refugee fleeing London, in an attempt to steer empathy on vast majority of us a while back. We fail to empathize with hundreds of grief stricken children in the Middle East who succumb to death under “friendly” fires, but spare no time to use flag filters on our profile pictures when couple of people get killed by terrorists in Europe.

The level of plunder and overall trauma humanity undergoes in Africa and the Middle East is real. But for the vast majority of us, it takes a white girl to emphasize that. It is disheartening to imagine that the real refugee crisis barely strikes an empathy cord.

We cannot look past what the Trump administration has to offer for refugee and asylum seekers. United States pulled down the refugee resettlement ceiling from 110,000 to 45,000, going against the criticism from the UN and the US refugee advocates. In 2017, the US resettled under 30,000 refugees. This year, it is on track to resettle even fewer than that, the fewest refugees ever resettled in 40 years, at a point where the need of resettlement is the highest. The world knows that most of the refugee in the Middle East is the direct result of American intervention. Thus the US has the moral obligation to give them their lives back, or resettle majority of them, if not all. After all, the US has 18 million empty houses, enough to house all 22 million refugees in the world.

Nepal has its fair share of responsibilities when it comes to protecting refugees. After getting elected this January as a member of UN Human Rights Commission for two years, its role in maintaining human rights is even crucial. That means, it no longer can afford to send mixed signals by inviting Burmese army representatives to Nepal like it did last December when the army was under the UN microscope for mass atrocities of Rohingya Muslim minority. That also means, it no longer can morally justify abstaining from a abuse of human rights vote like it did last year to please Burma. If Nepal is concerned about Nepali speaking Burmese in Burma, it should support every initiative for Rohingya refugee and speak against Burmese atrocities. Perpetrators always try to manipulate by playing nice. Nepal should have known it better dealing with the Bhutanese refugee crisis for two decades.

The World Food Program states that one out of nine or 815 million people in the world are undernourished. Hunger kills more people than AIDS, Tuberculosis and malaria combined. That means humanity is largely an eight letter word that has failed to provide a meaning—not even a safe space or basic food to millions of human beings. It breaks my heart to read that more than 1.3 billion people in the world live in abject poverty.

Data shows that there is enough food to feed 29000 children who succumb to death everyday because of poverty related causes. Americans do not have to spend a single dime more than they are spending now to feed the malnourished refugees in the camps if they can just stop throwing food in garbage and donate the food that is going into the landfills. But in the US alone, 40 million people live in poverty according to the 2016 estimates of Census Bureau. Yet, Americans throw 40 percent of food produced, $640 dollars worth of food per household, every year, as per the recent data provided by American Chemistry Council. The drying of empathy for the most vulnerable is pervasive—home and abroad equally.

What we can do
We claim to be the smartest of the social beings, but are letting go almost half of the world population hungry while munching on the excess and dumping what we can’t devour. What is the use of human progress if we cannot help the hungry people?

UN infrastructures are spread around the world. Recently they are connected with smartphones through apps for people who are willing to make a difference. Anyone can share a meal with a hungry child in Syria, Yemen or even with Rohingya refugees languishing in the UN camps of Bangladesh with one click. You can pick your country. Fifty cents (around 50 NRS) is going to buy one meal for one child. In 15 dollars, you can buy a meal for a child for the whole month. All you need to do is download the app on your smartphone and donate whatever you can, whenever you want to. Just imagine yourself eating a meal with a child who is in some refugee camps smiling, full stomach, because you chose to make that happen. And you don’t have to be rich for that. If you are lucky enough to buy two coffees in a row, the money for a second coffee can be donated to feed as many as five hungry kids. Giving up the second coffee of a day is not a big sacrifice. You can do that through #ShareTheMeal, an app launched by The World Food Program. More than 200 million people have already shared their meals. All those people added HOPE, the energy that keeps refugees resilient, against all odds. With our support, they will continue to persevere, dreaming for better life for themselves and their children. I am sure there are other apps supporting similar causes right in your neighborhood. I just stumbled into this one a while back and am clearly fascinated by an impact this is making.

Reviving moral education
We are in a crossroads where moral education probably needs to be compulsory in schools. I know it sounds difficult to argue for moral education when role models of the most powerful democracies fail to understand “consent” and struggle to keep their hands off private parts of the opposite sex. But, this is a stark reminder on why moral education needs to be a part of our overall growth since kindergarten.

Be it in Nepal or the US, we can’t afford to have another emotionally unstable, nationalistic self-righteous, generation which fails to understand that we are all connected, despite our external differences, to the same earth in more ways than we can decipher. And we definitely do not want to elect leaders who do not have control over their emotions govern us. The best gift we can give to the world is competent and compassionate leadership that resists from making hasty and uninformed decisions pushing us all into yet another war. Such leadership will produce nothing but more refugees.

RASAS. July 31: Syrian refugees are leaving a camp in Rsas town in Syria's Suwayda province and returning to the areas... Read More...