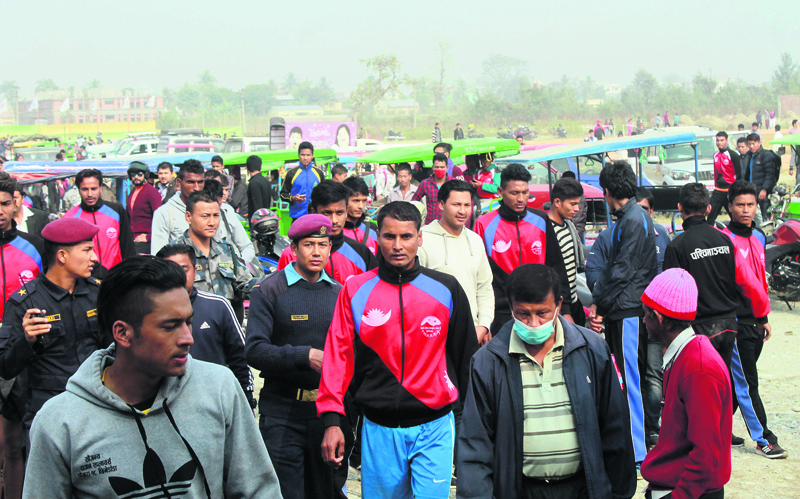 Republica Police personnel control crowd after a dispute broke out during a men’s volleyball semifinal match of the Seventh National Games between Western Region and Tribhuvan Army Club in Itahari on Tuesday.

On the same day, the women’s cricket team of APF walked off the pitch in the final of the game, which is also known as gentleman’s game, gifting gold medal to Eastern Region.

Unsporting behavior of athletes during the mismanaged National Games in chaotic Eastern Region is not limited to the above mentioned incidents. There were disputes in athletics after the local management did not organize athletics as per the tie sheet. The organizers failed to hold 60 kg kick boxing final bout after disputes. The semifinal winners returned home without playing the final.

“It is natural to witness such ills as the National Games is being organized in the standard of school sports,” said karate judge Deepak Shrestha, who is the general secretary of Nepal National and International Players Association. “Rather than maintaining the standards and conducting the games smoothly, National Sports Council (NSC) just wants to finish the game by hook or crook. The major stakeholders of sports including players, coaches, managers and referees all have taken the Games lightly since the office bearers of NSC has not given due importance to the event.”

Police intervened during the incident and later four players of Western Region including Sanju were suspended for a year from volleyball by Nepal Volleyball Association.

“Referee may commit mistakes but players should be disciplined. There is no point in organizing tournaments until there is security assurance for referees and players abide by sportsmanship,” said referee Rai, who was manhandled. “He (Sanju) is an undisciplined player and he had shown similar behavior during a recent tournament in Dhaijan, Jhapa.”

Even an official of Western Region admitted that it was wrong behavior from his team and even apologized for it. “The referee decision was not right. But we did not have other option than to accept it. We were even planning to appeal against the referee decision. But now players have let us down,” said the official who did not want to be named.

Less than an hour after the referee was manhandled, APF’s women cricket team walked off the pitch expressing dissatisfaction over referee decision. It was another incident which tarnished the image of the National Games. APF needed nine runs from as many balls to achieve 64 runs target with two wickets in hand. A shot played by Ritu Kanaujia started the dispute. Apsara Begam of Eastern Region dived and saved her shot from boundary preventing APF from automatic four runs.

In the gentleman’s game, there is a trend of asking the related fielder if it is four or not, in case the referee does not have clear vision of it. There is a belief that the fielder does not lie in cricket. After inquiry with the fielder, the referee awarded two runs to APF. Following that decision, bowler Kabita hauled two wide balls. APF then required only five runs from the remaining eight deliveries. However, the batswomen left the pitch following pressure from players’ box to leave the pitch.

APF, which left the pitch, however, took the runners-up trophy while Eastern Region was crowned the champion.

International cricket umpire Durga Nath Subedi pointed out that it was inappropriate for APF to leave the pitch due to dispute. “Every the umpire asks the fielder in such situation and the APF players must be well aware of it,” Subedi said.

South Asian Games record holder Deepak Bista, who won four consecutive taekwondo golds in the regional sporting extravaganza, pointed out that none including management, judges and players worked on their part correctly.

“The management did not give real importance to players except flowery speech for betterment of sportspersons lives. The management just wanted to complete it. Anyone who violates discipline must be punished, even if it is judge who gives wrong decision,” Bista said.

“However, it does not mean that players should beat up judge or leave the game if the decisions of the judges are wrong. Discipline is vital in sports. There are legal procedure and solution for all problems. Coaches must be competent to keep players in discipline. Stern action must be taken against undisciplined players,” Bista shared.

Referring to a kick boxing dispute which saw the finalists walk home without competing in the title clash of men’s 60 kg, Bista said, “What will the players tell at home after being deprived of playing in the final.” Bista said it was the weaknesses in managerial part.

National Sports Council Member Secretary Keshab Kumar Bista tried to defend poor management of the games saying, “There is violation of discipline not only in Nepal but also in Olympics. It is not the first time that such incidents have occurred. A system needs to be developed for punishment in such situation and we want that such situation not to happen in sports. We have rules as well as punishment for anarchy in sports.”

BIRATNAGAR, Dec 27: Karateka Mukunda Maharjan made a hat-trick of gold medals in the National Games on Monday as his team... Read More...

Let's not overshadow the issues that Prem Archaya tried to raise: Dr Toshima Karki
33 minutes ago