On a steady path to success 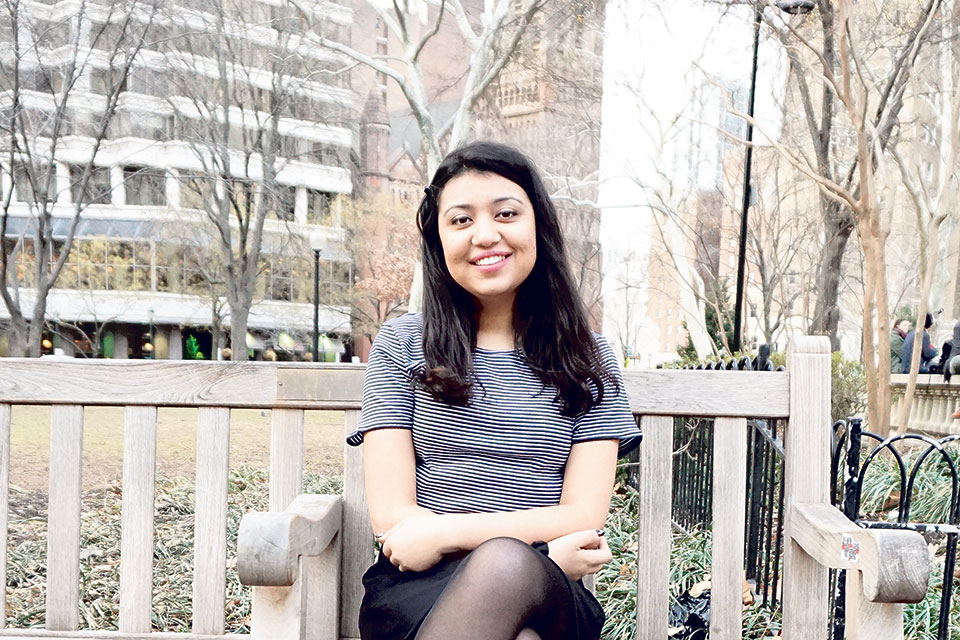 A couple of weeks ago, Mansi Dahal posted on her social media accounts that she would be publishing an anthology titled No Names But Connections. This news, of a 20-year-old Nepali publishing limited copies of a collection of poems in English in New York, travelled all the way to the other side of the world and throughout Nepal.

In just a few hours of the announcement, she received congratulatory messages and good wishes not just from her friends and family but from absolute strangers too. But not many know how No Names But Connections came about.

Dahal, who is majoring in English at Kalamazoo College, had to submit a project before she finished a ten-week long internship at PEN America. Dahal, who had secured the internship through the New York Arts Program, had an idea of her project being an anthology since the beginning but was not sure what she wanted the poems to be about. So, she drafted about twelve poems for the project before scraping it all off because something about them did not sit well with her. Dahal admits that this left her feeling like she could not write anything in New York. “I need my space radiating a certain calm vibe to be able to write properly and, with all the rush and hustle and bustle of New York, I did not think I would be able to write anything,” she says.

Fortunately, some days later as Dahal was skimming through her journal, she came across multiple stories that she had once jotted down. Deciding to use them for her project, she framed them into poems and attached a picture to each. Justifying her choice of adding pictures to the poems Dahal mentions, “ I decided to add pictures to them because pictures and videos touch certain senses that writing cannot. The pictures are not taken from a fancy camera because I wanted to showcase the raw emotions just the way I found them to be and made no conscious effort to make them look beautiful or pretty.”

Dahal finished the writing and editing process a few days before her internship was up and, at her advisor’s recommendation, published the chapbook as a limited edition issue utilizing the resources available at her temporary New York office. “I liked the idea about publishing just a few copies that are not accessible to everyone. It adds a certain rarefied charm to the work,” she says. Although it might be difficult to get a physical copy of No Names But Connections, Dahal has uploaded the link to the free digital version of the anthology on her social media accounts for those who can’t get their hands on the physical copy.

As far back as she can remember Dahal has always loved writing. She loves how words connect everyone and everything but, for a long time, she did not believe that she could write laudable articles. “Some articles I wrote were published in various newspapers when I was in middle school but I stopped creative writing in my high school years. I was so nervous when I submitted my first poem for the creative writing class I took up for my undergrad studies,” claims Dahal. To her amazement, her poem Alternate Names for Nepali women was selected to be read out loud in the next class. Dahal declares this as a turning point for her as she finally gained enough confidence in her writing and decided this was what she wanted to do for the rest of her life.

Dahal has written everything from op-ed articles for newspapers to short stories. She claims to love Nepali literature and vocabulary and reads at least one article in Nepali every single day so that she never forgets her Nepali roots and understanding of the language. In her free time, she likes to sing and sketch, and her secret talent is apparently dancing.

“I’m very grateful for my family’s support through everything. I don’t know how they expect me to earn a living with an English and a filmmaking degree but I appreciate their faith in me nonetheless,” says Dahal who has taken up filmmaking as her minor for her bachelors. She feels the involvement of just seven percent women in Hollywood filmmaking saddens her and Nepal’s incompetency in producing a movie with a good script and content despite the increment of budget and cinematography techniques bothers her. She also gets quite annoyed when people say that a particular movie did not adapt the book it was based on correctly. She argues that books and movies touch different senses and filmmaking is a complicated area of work that is very different to writing – making the two incomparable.

Although she is not sure when, Dahal too has plans of making movies and creating things in general that inspire others after she gets her masters degree in either filmmaking or writing. She also loves traveling and wants to travel the world creating short videos of her escapades. “Above everything else, I want to shape myself as a strong independent woman who breezes past life’s highs and lows coming out stronger every single time,” she concludes.

Mr Foodie: My success was unintentional

Famous Instagrammer and a food blogger ‘Mr Foodie’ says that his success is unintentional and he never sought for success. Read More...

KAVRE, June 11: Some years back, locals of Rayale Lamidada, Panauti-1, in Kavrepalanchok district had no choice but to visit nearby... Read More...