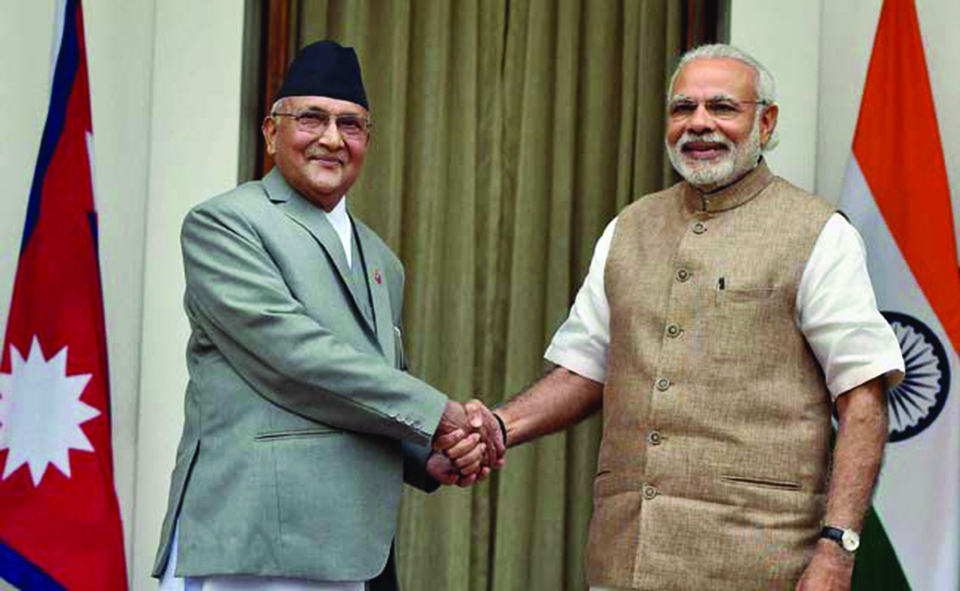 With KP Oli, a vocal critic of India against its meddling in Nepali politics, becoming Prime Minister again, how will Oli-Modi chemistry go?

Successful completion of local, provincial and federal elections have laid a strong foundation for implementation of federalism in Nepal. The left alliance, constituting CPN-UML and CPN (Maoist Center), swept House of Representatives and Province Assembly elections. India, which has always supported Nepal’s major political transformations—extended support and assistance in the recent elections and has welcomed the election outcome.

It is apparent that road to federal democratic republic started when CPN (Maoist) and seven political parties reached a 12-point Comprehensive Peace Agreement (CPA) in 2006, in which the parties pledged to work towards democracy, peace, prosperity and social advancement after the end of the monarchy. Several talks between Maoist leaders and seven-party alliance were held in an Indian government guesthouse in New Delhi, before they reached an agreement in November that year.

Undeniably, India had played a constructive role in achieving this success, which ultimately ended 10-year long armed conflict and created a base for reestablishing democracy. India also stepped up its support in political developments that followed.

Despite some blips and hiccups in Indo-Nepal bilateral relation, especially the anti-Indian sentiments which rose after 2015 Indian blockade, post-election political developments have signaled that India-Nepal relation is going towards positive direction.

India was dissatisfied with new constitution of Nepal. But it has welcomed the elections conducted under this constitution. This is a meaningful step. After the elections, Indian Prime Minister Narendra Modi held separate telephone conversations with Prime Minister and Nepali Congress President Sher Bahadur Deuba, UML Chair KP Oli and Maoist Center Chair Pushpa Kamal Dahal to congratulate them on election success and even expressed his wish to extend support to Nepal’s economic development and prosperity.

Conversation between Modi and KP Oli is even more meaningful. Modi congratulated Oli on left alliance’s success and expressed hope that left victory would ensure political stability and economic development in Nepal. Modi also invited Oli to visit India after the formation of new government stating that he was eager to welcome Oli.

Modi was also the first Indian prime minister to visit Nepal in 2014 after 17 years. Ever since Modi assumed office, exchanges of high-level visits between the two countries have become more frequent. Modi has already received four prime ministers from Nepal in New Delhi—which is an example of political instability and frequent changes of government in Nepal. Now it seems PM Modi wants stability in Nepal.

But with Oli, who has remained vocal critic of India against its meddling in Nepali politics, becoming Prime Minister soon, how will Oli-Modi chemistry go? How will left dominance in Nepal impact Indo-Nepal bilateral relation?

Both Oli and Modi are charismatic, articulate and effective communicators. Both are experts in diplomatic issues. Modi had frequently visited Nepal even when he was a cadre of Bharatiya Janata Party and is familiar with most things in Nepal. Since his adopted son is also Nepali, he must be quite familiar with hearts and honesty of Nepali people.
During his 2014 visit to Nepal, Modi showed love and support for Nepal and won hearts of Nepali people. People hailed him in the streets.

Indo-Nepal ties suffered a crisis when following Delhi’s diplomatic intervention in Nepal’s new constitutional process and Indian blockade, which became a recipe for fueling anti-Indian sentiments in Nepal. Oli stood strongly against India, invoking anti-Indian rhetoric and criticizing its ‘hegemonic interference.’ Oli, however, has been saying that he is not anti-Indian while clarifying that all that he did during those days were meant for improving relations between the two countries.

Oli had held India responsible for the fall of his government by ‘Indian remote control’ after CPN (Maoist Center) pulled out support in July 2016. India has vehemently denied all these charges.

Historically, Oli’s relation with India has never been hostile. Oli once gambled his political career and was even branded ‘man of India’ after his role in historic Mahakali Treaty of 1996. Oli was the only leader within UML to stand for the treaty.

In fact, Oli is the leader who can be counted to take a firm stance on issues of welfare of the country. He has always put national welfare first while respecting neighbor’s wants and wishes—a common character found in Oli and Modi.
In 2015, Modi paid a surprise visit to his Pakistani counterpart Nawaz Sharif, the first visit by an Indian premier to Pakistan after 10 years, with the purpose of improving bilateral ties between the two countries.

Now with Modi expressing eagerness to welcome Oli in New Delhi soon after he becomes the PM, cracks between Kathmandu and Delhi are expected to gradually erase. If the Oli-Modi chemistry works fine, and if the left alliance gives Nepal a stable government for a straight five years, a strong basis can be worked out to materialize Nepal’s dream of economic development and prosperity under his leadership.

At a time India has been consistently focusing on development issues, Oli can present economic issues with Indian side. A comprehensible bilateral foundation should be prepared for the benefit of both countries. Nepal should learn to take advantage of growing economy of India, and economic rise of China as well. Time has come for Oli to show his diplomatic ingenuity keeping in mind Nepal’s geopolitical reality.

Nepal is a land-locked country bordering China and India. Given our geographical connections, apart from cultural, religious and political similarities, it is necessary to develop a special diplomatic relation with India, with development as a major agenda.
As a strong leader, Oli can give a strong leadership to the country. But it will largely depend on his diplomatic policy how well he can take India and China into confidence. Oli should be able to utilize the chemistry with Modi for better results.

Luckily for Oli, the atmosphere has become positive at the moment. After Manjeev Singh Puri came to Nepal as Indian ambassador, India itself has made efforts to improve relations with Oli. Puri, a successful diplomat, has paid a courtesy visit to Oli frequently after assuming office. He has played a crucial role in improving the relation between Oli and India. Puri has sent a clear message that India wants stability and prosperity in Nepal.

Oli can capitalize on this atmosphere but he should be able to establish a positive coordination with Deuba and Prachanda. Prachanda is a far-sighted leader while experienced Deuba can play a constructive role from the opposition. If Oli can take Deuba and Prachanda into confidence and build a strong and positive relation with India, stability and economic prosperity won’t be very far. Oli can prove himself as a charioteer of Nepal’s prosperity if he can make growing economy of India beneficial for Nepal as well.

KATHMANDU, Nov 24: Nepali national women's cricket team has set sight on beating at least one of the Test-playing sides in... Read More...