Oli to give one more try for consensus before India visit 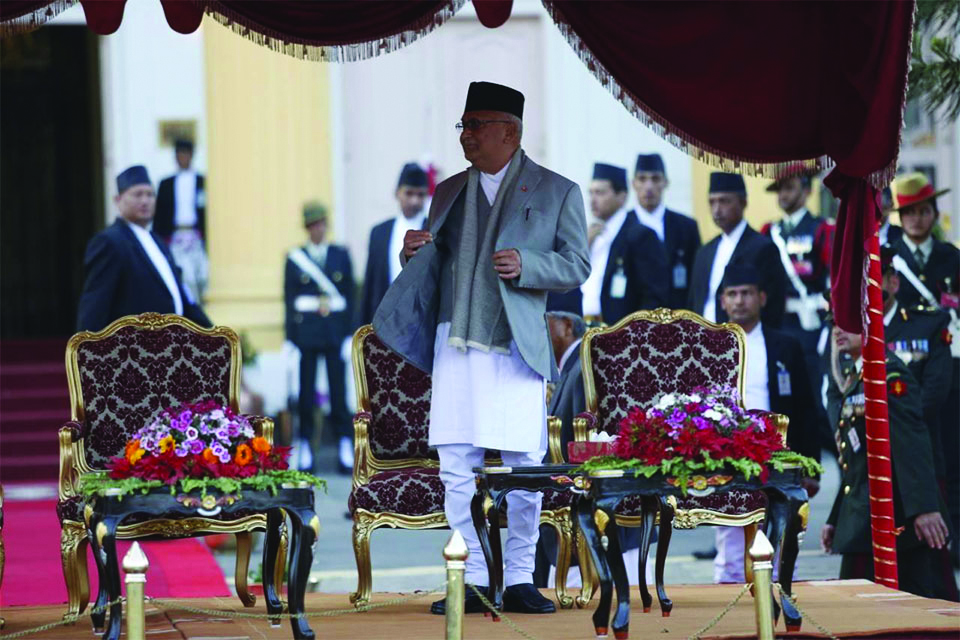 KATHMANDU, April 3: Top leaders from CPN-UML and CPN (Maoist Center) will seek to end the row over the left unification as they meet on Tuesday. A meeting of party unification coordination committee headed by chairmen of the two left parties is scheduled to take place on Tuesday evening.

The meeting is taking place at a time when the left merger, which was announced one and a half months ago, is becoming increasingly uncertain due to fresh disputes over ideological and organizational issues.

Two task forces formed to sort out ideological and organizational differences have already drafted the proposed party statute and outlined the modality to unite the organizational structure of the two parties.

But some key issues including division of power, election symbol and the Maoists' demand for formal recognition of People's War in party statute remain to be finalized.
During the meeting, the two taskforces headed by UML senior leader Madhav Kumar Nepal and Home Minister Ram Bahadur Thapa would formally hand over the drafts and brief the coordination committee about the major bone of contention.

"We have not included contentious issues in the drafts. Leaders would be separately briefed about the differences," CPN (Maoist Center) spokesperson Pampha Bhusal said.
Maoist leaders involved in preparing the drafts said that three issues remain to be ironed out. The biggest difference, they said, is over division of power in the new party.
On the eve of the meeting, CPN (Maoist Center) Chairman Dahal reiterated that equal division of power was indispensible to take the merger to a logical end.

"The party unification, in principle, does not happen on the basis of percentage, like it happened during the elections. The party unity should happen on principle of equality," Dahal told reporters during an interaction at Chitwan Airport on Monday. Dahal also ruled out the possibility of merger before Prime Minister KP Sharma Oli's India visit which is taking place from April 6 to 8.

Dahal's remarks came hours after Prime Minister Oli said that there were still chances of consensus on the party unification before his India visit.

"It (unification) could happen before India visit, it might happen after India visit. But it will happen. This is not something that should be done in haste or delayed. The two parties will unite in opportune moment," Oli said while addressing a program organized at the party headquarters on Monday.

Second-rung leaders involved in negotiation said chances of consensus now depend on sincerity of the two chairmen to find a middle way.

The party--which has been named Communist Party of Nepal-- will adhere to Leninist Marxist philosophy and embrace the "21st century brand of socialism suitable in the present context of the country".  The two sides have also drafted a modality to merge the organization. The party will have eight executive committees, according to UML leader Baburam Bhusal, who was involved in drafting the statute.  The central committee will act as the party's steering committee with two strong bodies-- the politburo and the standing committee -- under its purview.

The central committee will not have more than 299 members, while the politburo and standing committees will comprise of around 99 and 33 members respectively. The number could go up or down depending on the need.

The taskforce has proposed setting up 150-member provincial committee and 75 to 125-member district committee, while election area and local level/municipal committees would each comprise of 75 members, informed leaders involved in drafting the party documents.

NC objects to prorogation of House session
10 hours ago